Am I the only one or does the Gnasher fill up even worse in OP 5, It’s just frustrating.
I could create clips like that all day it’s the same every round/match. 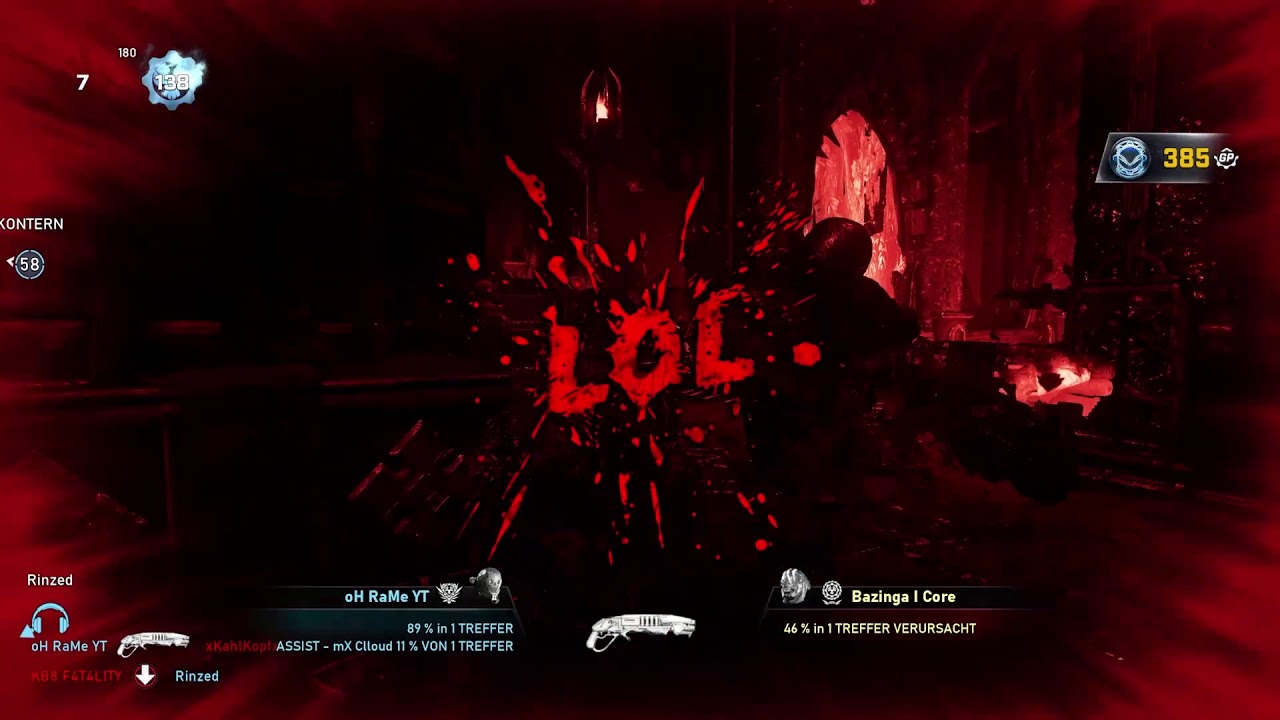 Lol you got owned by complete inconsistenty from the gnasher.

Anything below 87 percent is your fault. You didn’t get enough pellets in for the gib. That 99 percent tho…jesus. That’s a sponge right there.

That sucks, the worst part is that happens all the time.
Btw, that’s netcode issue, not gnasher tuning.

Dude same thing happening to me all night last night.
The hip fire is broken especially in left corner shots. The slow movement and slow slide speed makes this game feel clunky and to slow. Idk wtf TC is doing but they need to bring back gears 3 play style.

No it’s your fault for jinxing me. How dare you say it’s my fault when you say how it’s going to go all the time. Now I’m only gonna get 87% each time.

Thanks boom you ruined my day. Now prepare to be annihilated by my series of unfortunate events!

Some of these are netcode issues. I don’t think the gnasher is 100% at fault. The main issue with this game is the input delay. Some players can see you before you see them. Also, that last death was a mix of bad netcode and the wrap shot, which needs to be removed

The combination of these two factors has been driving me nuts since Op5 launched. The wrap around is so ridiculous, I’ve been one-shot by it so many times like in that clip yet when I try it the opponent never dies and I can see the pellets go straight through them and not register.

This is why when I press the trigger to shoot it is my opponent who shoots in my place in the next second and kills me, all the time.
Not to mention the times when my character finally makes a shot in the game but the bullets go through the opponent without damage!
Now I avoid playing early in the morning or late at night because this often happens on American servers (I’m in Europe)
Also, since I got the Xbox Achievements for Ranked and it doesn’t give me any fun playing because of it, it’s over for me. Even for coin rewards, I’m not interested.

It’s been explained a number of times that the Gib range has kind of a hard number distance. Shooting even 1uu too early will net you a sponged 99% shot while the person eating said shot shoots literally a few frames after getting the kill as you or him move into Gib range by the extra 1uu.

This is, what I think, is the hardest part about tuning the Gnasher properly.

Also, that shot on the diving Dizzy did in fact seem off. You shoulda hit at least a few more pellets in his legs. It’s like his hitbox squished up to his upper body as he dove giving you what looked like ghost pellets

It’s been explained a number of times that the Gib range has kind of a hard number distance. Shooting even 1uu too early will net you a sponged 99% shot while the person eating said shot shoots literally a few frames after getting the kill as you or him move into Gib range by the extra 1uu.

please get rid of 99%, it’s one of the most nonsensical things in the game

Threads like these always make me laugh. If you all got that gib every time you would be happy. Heaven forbid you get 2% 99% or whatever. You miss you miss and all things considered it is still a game. You also seem to forget the reason 99% is frustrating is because G4 and G5 actually shows you the %. No other gears did this. Play a game that doesn’t show % and you say ah whatever when you die. Play with the % and see 99 and you scream b.s. and that’s okay. Just have to deal with it. Rock n Roll!

already lately i’m feeling frustrated even i can’t kill them with one shot anymore being a veteran i know when i have to shoot otherwise i wouldn’t be master from the first season i swear that out of 5 people in a row 99% appeared to me and i died like a idiot from the embers that walked, this thing is absurd coalition have you made a hidden modification to the gnasher?

Op 4 tuning would sort this out big time , bullets actually registered all the time and was the most consistent it’s ever been

Could you tell me exactly what they changed from OP4 to OP5?