Gears 4 had the best horde. You bring us this horde in 5 and it just plain sucks. Instead of being a team game it is more of a free for all. Everyone running to grab energy to build up their own cards. No money for the fab to build up a defense. You could of just tweaked horde 4 by adding a boss every 5 waves or something like that, Being forced to thin out base all over the map to protect energy pods is ridiculous. There was nothing wrong with the way horde was on 4 so why ruin it. Also forcing people to use certain characters to for certain jobs is stupid. I was mainly an engineer on 4 and I hate the Character Del, He is a whiney little ■■■■■. My favorite character is Baird and cant even use him… also I would want to use him as a heavy, scout, sniper, and soldier. Now to get on the bull of making the graphic’s to cartoonish / arcadic. And now to get on the problems of not being able to play without getting booted. You guys had more than enough time to have the servers ready, instead of opening a tech test just for verses you, should of did verses and horde together. not everyone plays verses so this is on you… You should feel bad and reimburse everyone that paid the extra to buy the ultimate. when you are having all these problems and charging more to play early and can’t it is wrong

Agree 100% horde is not horde anymore

I can’t agree more, I sunk a ridiculous amount of hours into gears 4 horde and loved it, only played a few hours of horde in gears 5 but i refuse to play anymore in its current state.

Agreed. Gears 4’s horde mode is a masterpiece compared to the shitshow in 5. I’d rather choose to play as my favorite character, play as any class, buy any weapon from the fabricator as any class, buy any fortification, and setup a base in a good spot than running around collecting energy from power taps. I know people complain about quitters in horde, but it’s not the player’s fault that they can’t play as their favorite character. They should blame TC and their stupid restrictions on duplicate characters and locking classes/roles to specific characters.

Agree i do not buy this game until they change this limitations, this is a step backwards in gow.
I will wait until this game drop under 5$ to test this because if i do not like horde in gow5 this game as absolutly no interest for me.

update: a friend buy me a cdkey i play horde 6 times, finish one. Close the game. Something is verrrry wrong.
i have made a topics here: Worst horde system EVER! Awful gameplay experience

Then you have everyone using energy to upgrade the skills and not putting it in the fabricator which I think is absolutely stupid. I myself to really hate gow 5 horde it’s the worst ever. For I myself is not a PVP person . NEEDS OVERHUALED!!

this game basically sucks. no wingman, no 2v2 gnashers, no execution unless private match… and horde. they literally only care about fortnite. 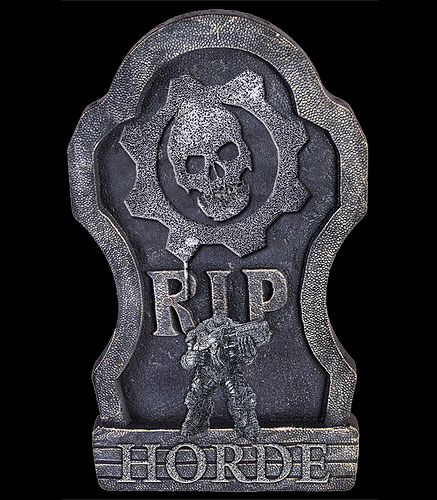 Here are a few personal suggestions that would enhance the horde experience in my opinion. That feeling of Building a Scout with Speed Boost, Brawler, Execution Bonus, Health Boost, Deposit Bonus. A completely unique play style. Lets look at the idea of Horde as a whole. It’s a game of base building: RTS players love this aspect as it diversifies every game depending on what you build. I remember having beautiful bases. Everything placed nicely. You’re devoting several hours to it so why not. Just like in Command And Conquer.
Below are some fortifications I would like to see but probably never will:

(Good fallback option and offers the engineer some offense)

(Can be used to aid detection of enemies with tac-com)

(Can be used to defend valuable fortifications like weapons lockers)

I would also like to see the class system brought back. I know it’s a touchy subject and I am perfectly okay with the Gears 3 style horde aswell. But Engineers should have access to every fortification and upgrade path. I like how all energy collected now goes to the fabricator. That was a good decision TC. I like the addition of a healer/support class. It helps on those Inconceivable waves. I would like to see more emphasis on class usage such as Heavies using heavy weapons. Give them more incentive to do so. And please bring back Explosive Headshot. That was so satisfying.

Do devs even read this?

I don’t know why developers think: “we know best”

Gears of war 4 horde would have been made absolutely perfect if they took some skills away from classes and made them automatically passive instead. So a soldiers perfect reload as a passive instead of taking up a card slot - that example would be op but you get what I am saying.

WHY DID THEY FORCE US TO PLAY AS CERTAIN CHARACTERS TO PLAY THE CLASS WE WANT?!?!

Now gow5 horde is full of people who don’t know how to play horde. I always get some absolute spanner running about at wave 25 with 40k energy and no concept of team work. And I have plenty of choice words for those idiots. Learn to play in a much more vulgar tone.

And now we have in game perks you have to pay for with valuable energy??? Why did they do this!?!
The vast majority of these imbeciles don’t even know how to take cover let alone play for the team.
Should have had it where they deposit energy they’re given contribution points (make this damn obvious too cause most people I come across have no bloody idea where the fabricator is) at a 1:1 ratio to improve themselves (make the damn perks worth it… a 1% jump from lv 9 to 10 costing 5k isn’t worth it)

I really couldn’t disagree with you more. First off - if you want play Gears 4…play Gears 4! There is so much in Gears 5 which makes it fresher and more interesting IMO and a lot of small elements which you only learn as you play which are all designed to encourage more tactical team-play, more aggressive play and generally more options about how you approach a map. There’s so much more variety you can play with as a team for each map than before. We’re having fun attempting with and without worrying about taps, with different team mixes, with and without forge etc etc. I like the Heroes element as this gives each character MUCH more definition and that they are an actual character rather than a skin. Everyone here should quit griping - explore the new way of playing more - or just go and play Gears 4…

This gears 5 version sucks on horde. You can have your opinion but the vast majority of people hate it. You might be the only one I have seen that has liked it

I loved horde. I spent so many hours on gears 4 and enjoyed it. Gears 5 horde stinks. I can’t be who I want to be. No turrets? Wow!!!
The taps are useless unless the engineer is desperate for cash (and he usually is)
Nobody puts money in fabricator so everybody is just running around like clowns.
There is no scout except Kait?
I understand the cloaking ability is to help scout but nobody does it.
I’ve seen players with 100k plus and not deposit in fabricator while everybody else dies.
And you can’t get the money when they die??
They (coalition) need to change this crap or they’re going to loose a huge following.
I really feel robbed out of a game I loved so much.

I agree. They need to give us our game back.
Make classes again.
Why do I have to be del if I want to be engineer?
I hate del.
I killed his ■■■ in the campaign like most other players did.
They really screwed horde up to the point that I want to just go back to gears 4.
Shame on the coalition.
Shame
Shame
Shame

At this point I’d take a return to a gears 3 style horde over this. At least we could play whatever character we wanted with whatever weapons we wanted.

Why TC seems to be following trends with this new “hero” system instead of doing its own thing is beyond me.

I agree. Horde has lost its way. I wrote a post about it too. Its a sad state of affairs for the Horde I love so much.