Why does everybody use Lizzies cold finish card? aka my Lizzie setup

She’s my favourite character in the game because she is extremely cool and has the dropshot as standard weapon plus the hammer. The dropshot is one of my alltime favourite weapons in video games. I love how u can hit almost every enemy with it no matter where hes positioned and the cool trickshot possibilitys that go with it.
I was really a freak with it in GoW4 and since they brought out the Hammer card it its highly usable again in Gears5, allthough with the GoW4 version it was much easier to get headshots.
I noticed a low ping and lettin the shot fall from high in the air will get u easier headshots. The shot will suck itself in the enemies head way more often (like it did in GoW4) than it does with higher ping and low falling height.

But to topic:
Cards
I dont know the correct english names, but I’m sure u can follow me
The hammer
Stim from damage output
explosive healing (not the silverback one)
silverback salvo
silverback mulcher

I don’t get why everybody uses the cold finish. With this setup she’s literally unkillable as long she has a dropshot in her hands.
If she has a locker with 4 drops and ammo, damage and health perks, she can out dps everybody on some maps (like pahanu with spawn setup) because she can constantly spam dropshot rounds without waiting till her health regenerates, while others will get downed and have to wait for a teammate or regenerating health.

Everytime she shoots and hits something (dont have to be a headshot) she heals and gets fresh stim and can directly shoot again. This also makes her crazy tanky and enables her to stand at the front much closer as most other characters, which increases the dropshot shot rate even more . The only time when she can get downed is when she switches dropshots at her locker.

I finally maxed her a few weeks ago and was getting addicted to her highspeed gameplay while doing it. The other day I was playing as JD again since a long time (Op3) and I had to wait so often for my health to regenerate or was getting downed that all the waiting time really annoyed me.

Plus she stops the enemies heavily with the stun effect. One shot at the boss the next at normal enemies and repeat. And I didnt even mention the silverback which can deal out heavy dps or can get shared with a low dps teammate if somebody wants to, because all u need is your dropshot. U can also use the silverback to go far out the base to revive teammates (weapon collector Jack, Kait or Engineer) u just have to shoot at a close enemy once you get out of the silverback, u will get stim while your reviving and will be in i he silverback again before u need to take another shot for fresh health/stim.

Don’t get me wrong I like cold finish, but there is really no space for it, because Lizzie is by far mightier with this card setup.

People use Cold Finish because of its utility for freezing bosses or tough enemies for a quicker finish, or preventing enemies from being downed. Opens up more opportunities to use other weapons than the Dropshot more too, and if using the Mulcher does not allow Drones to be downed while using the Silverback. A frozen Matriarch is better than a stunned one… as soon as it gets to low enough health.

And usually, it isn’t necessary to have the explosives healing anyway, if you can avoid getting shot well enough.

Yeah i get what u saying, but a frozen boss isnt much longer frozen than when u hit em with the stun dropshot plus the only 25 percent health left problem.
It enables using other weapons but why should u use another one if the dropshot is her strongest? Its like playing JD with a torque bow or dropshot instead of Boom or GL.
The silverback mulcher problem is valid, but u can kill the downed enemies with the salvo or use the trishot instead of the salvo.
U can’t stay close at the front, spam short-aimed shots and not gettin hit. It’s not possible and u will get no stim if u r damaged. With explosive healing it doesnt matter how damaged u are, u always get stim back and have a much higher dps and tanking ability in the process.

Never even crossed my mind to use her healing explosives, I’ll give it a go.

Let me know what you think of it after your try

explosive healing (not the silverback one)

Someone from here said you can use Healing Explosives instead of Explosive Munitions and it’ll heal Lizzie and her Silverback, so I eventually tried it and it works. I was under the assumption that it only healed her and not the Silverback.

People use Cold Finish because of its utility for freezing bosses or tough enemies for a quicker finish, or preventing enemies from being downed.

This definitely the reason.

I use Cold Finish instead of Aggressive Armor.

I was under the assumption that it only healed her and not the Silverback.

It is correct to have this assumption because there is supposed to be a distinction between explosives healing Lizzie, and explosives healing the Silverback with the two different skills, I would think. Most likely a glitch because it renders Healing Explosives 100% pointless.

I use cold finish because I just don’t like using the drop shot. Granted I’m not great with the weapon but I don’t find it a satisfying weapon to use either. Digger>dropshot.

I liked the Digger aswell, but the Dropshot beats it easily in my book. Can’t say that about the Booshka though

Dropshot was by far my favorite explosive weapon in GoW4, both Horde and Versus. I had maaaaaany video clips of taking out sentinels and guardians at range with it…

I hate how they killed it in G5. It’s lime driving a bmw for 3 years and then being given a civic. Sure, it will get you there, but it is not the same thing… 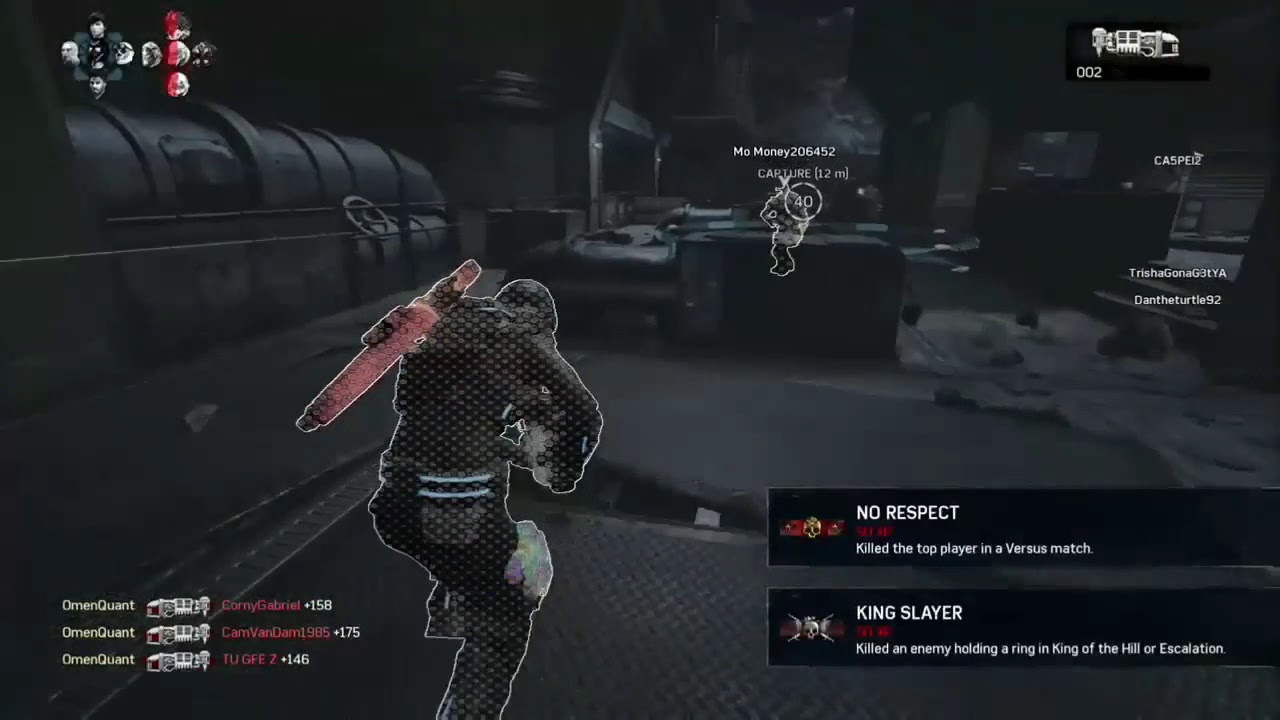 I think it’s her most important card in Escape, especially, because of ammo scarcity. With Lizzie rapidly freezing enemies at 25% health with just the talon she starts with or any hammerburst she found lying around, it helps conserve more important ammo the rest of the team is carrying (e.g. longshot, overkill, boomshot). Maybe it’s not quite as important in horde where you can just have an engineer build everyone a locker and ammo isn’t an issue though.

When there’s no big damage dealer in a master game to kill say, a carrier, her cold finish is really nice to have. Speeds up the process a lot if she has cold finish on to finish off bosses.

I think in that case lizzie can be the big damage dealer. Lizzie can it be for all bosses except matriarch because she destroys the silverback to easily

i dont use cold finish at all.
I did (before OP4 gave her a Dropshot Card) because it worked pretty good with a Trishot,
I dont use a Trishot anymore on Lizzie (nobody should IMO) so there is no Reason for me to use Cold finish. 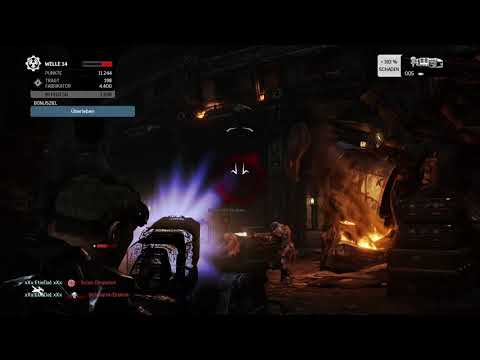 Thing I miss the most is one shot killing pesky Sentinels or Guardians. Now you have to land at least two or three direct hits with Lizzie to kill one… unless there’s something I’m missing.

I think i need like 4 Actives for Sentinels (Wave 45 on Master) which is to many IMO but at the same time the AOE Damage on the Dropshot as Lizzie is Insane.
Just remember in Gears 4 after Wave 30 basicly nothing died from just 1 Shot AOE, Lizzie can still oneshot kill non Elites with AOE on 40+

You need atleast 2 Active Headshots for Scions or Dr1’s.

When you get those (drilling-sound) Headshots, for some odd reason the direct hit Deals less Damage because it only deals damage once while the drilling one does deal 2x Damage
(the Headshot and the Blast)

Ever since Gears 4 i was kind of wondering if the Game just flips a Coin and decides whether it’s a drilling or “just” a direct Hit. Back then it did not matter at all because both where Insta-gib, sadly now it does make a huge Difference.

When you get those (drilling-sound) Headshots, for some odd reason the direct hit Deals less Damage because it only deals damage once while the drilling one does deal 2x Damage
(the Headshot and the Blast)

I want to add here. I was at a point repeatedly running The Line on Insane with health and damage off, and used the Dropshot a lot during that period. The damage dealt on a headshot is inconsistent and my findings lead me to believe it is purely decided by RNG, when I chose to drop the projectile and at what height did not seem to matter. The damage on the headshot itself would sometimes be 3,000(not enough for a kill even with the explosion), somewhere inbetween(likely 4,500) and also kill the Scion with the explosion, and 9,000 which would outright take the head off without needing the explosion to kill. This applies to both Horde and Escape but the numbers I gathered are for Escape.

Ever since Gears 4 i was kind of wondering if the Game just flips a Coin and decides whether it’s a drilling or “just” a direct Hit.

All I can say is I think the Dropshot just feels off compared to Gears 4(as do a few other weapons). Previously I used to get direct hits and headshots on things fairly reliably(enough to kill things relatively everywhere if I could reach them). Now it feels off even when I haven’t changed much myself and like the drills also go for targets less often and just drop next to them.

Yeah it sure feel like this sometimes - same with the Stun-abiltiy of it, sometimes they’re stunned for almost ever (especially the Matriach and Swarmak) but then sometimes Enemys are stunned for a split Second, i guess it’s a Bug, There is room for improvement for sure, but with that being said i do prefer Lizzie’s new Playstyle over the old Trishot “meta”,