Where is this GOW movie!

So rod says that they have sealed the deal on the movie but nothing has been said since???

It’s been nearly 5 years and next to nothing has been said.

As far as I know the only thing that was really confirmed was that it was a thing and Universal were behind it or something like that.

There are much more pressing issues than a movie rn

Studio A strikes a movie deal to secure the rights to intellectual property X and Y, but only Movie X is announced.

Then they sit on it forever or (rarely) they will make a low budget version of movie X and shelve it with no intention of ever releasing it all in an effort to keep Studio B from getting the rights to make Movie Y. (This was the case with the early 1990s Fantastic 4 that was only recently found.)

In this instance Movie X could be Gears and Movie Y could be a Halo, or …uhh …a Fortnight film.

I don’t know why people want a Gears of War movie? An animated film could work but then I would ask the question if it should have just been made into a game or a DLC.

I think a live action film would just be terrible with all the CGI Locust or Swarm especially the bigger creatures. Set the entire film during the night time so you don’t have to worry as much about the quality.

You have to check your local Redbox for it

I got news about the movie

I agree with animated not live action.
Some of the Halo and Star Ship Troopers animated movies are pretty good.

Also you could use the correct voices for the characters.

Anything from The Wall Street Journal is not to be taken seriously, silly girl

yes agree animated movie by blur or axis studio is the best option i could imagine. just the quality of their works speaks for it self.

Key point, he left half a year ago.

I remember seeing a picture on these forums of a confirmation of a Gears movie, serieses (is that a word?) of Halo, Fallout & Minecraft. There was also an Elder Scrolls show/series that was apparently unconfirmed.
Now whether these confirmations were legitimate and official? Who knows. But, if it was real, that’s pretty much all the info we have at the moment.

Also uhh, Rod has been gone for months lol. I think he went to go work on Diablo or something, I forgot.

Lord of the rings !!! It can be done with enough people who actually love the property also Akira would be a great one there was an amazing fan trailer made by “the Akira project”

Better make an animated one, with the original game voice actors.

Or a live action one with new characters.

Rod Fergusson: Yeah, I mean, we talked about this a lot. Between us, me and the producers and the studio at Universal. Basically, I wanted to make it really simple for them to be creative in that space. Much like when I work with the book author or the comic book author, I try to find some pocket of negative space where they could play and not feel obliged. [Not] like they’re going to redefine my lore, or that I’m going to overly constrict them. What I told the told Universal and Dylan Clark Productions was, “Make a great movie first, and make a Gears movie second.”

Dwayne Johnson: I can’t tell you which game in particular we’re doing, but there will be an announcement this year. We’re going to bring one of the biggest, most badass games to the screen—one that I’ve played for years. I’m really excited to bring it to fans around the world. Of course we’re going to do right by our gamer friends—but really we’re just going to make a great movie. 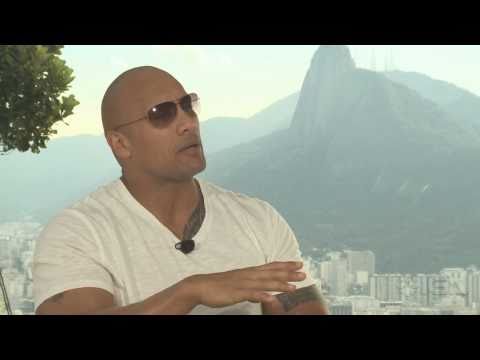