When do you think Gears 5 has started to fail?

I can assure you escape is a blast. Some hives are pretty tight on ammo and that’s ok, CQC classes can thrive in those hives and some have loads of ammo.

On the PvP side, for me, the game was still born. it was never good (and I loved gow4 pvp

Gears 5 pvp was at its peak in early op 5. Too bad that only lasted for a couple months

. I also preferred gow 4s tuning, shoot I would’ve rather have used gow 4s comp tuning than what trash we have now.

, CQC classes can thrive in those hives

Hehe, I’ll stay away from those hives…

my brawler is level 2, my blademaster is level 6 (I think), protector is level 10… I never got into cqb, another reason why escape wasn’t all that appealing to me early on.

Gears 5 has started to fail when the company choose to launch this unfinished game.

The core bugs are still unable to fix because they know they can’t fix it.

We’ll get the same story if Gears 6 is like that.

Anything is being too late to realize if there’s a problem,

Better for nothing？What about “better not buying it”？

working on multiple gears of war project with only 3 years of development is not sufficient and it will cause lack of innovation and many other problems come with it. 5 gears in 6 years

they need to give a proper development time to just one gears of war game like 4 up to 5 years with help of talented team at splash damage.

rehashing the same story from previous games.
relies heavily on negative space story telling.
half baked open world with size of 7km*5km and nothing interesting to tell, it’s almost the same size of cyrodil
and twice bigger than morrowind.
no multiplayer beta test before launch.
same pvp for 15 years.

Separate from the gameplay, the user experience right now of getting on the game and playing it is better than at any other point in the history of Gow5, and yet still worse than Gow3 or 4. It took TC years to figure out that people like classic vertical progression leaderboards, and we got them at the cost of tiered-ranks however the matchmaking still acts as if we have tiered ranks.

On the gameplay, it’s boring, it’s the most boring gameplay GoW has ever had and that’s almost nothing to do with the speed of it, it’s the repetitiveness of it. Everything is chunk range, no one shoots their gun, it’s almost impossible to miss your entire shot and the chunk range is inconsistent because it doesn’t have the range. Aiming is too easy across the board, this game isn’t balanced for 120hz let alone the 240hz that most of my games are filled with.

I’ve always judged the state of GoW by looking at the online competitive ladders, formally GB and currently UMG. The simple fact is that the last two years has seen the sharpest decline in this area that we’ve ever seen.

The online eSports scene, something that was incredibly strong at all times between December 2006 up until late 2019 — it’s as close to dead as I’ve ever seen. Using the waybackmachine/archive you can bring up different points throughout those 13 years and see time periods where there were 7,000+ teams of players on gb. There was a period with 20,000 singles teams, 10,000 doubles teams — you could get matches any time, instantly.

In 2019, there were stills thousands of teams & players on gb playing upwards of 20,000 matches per month. This is all gone — replaced by this.

Combine the team, doubles and singles — just pretend these are all different people with no overlap — and in total the number of matches played barely creeps over 1,000, with the number of players in the hundreds.

What’s more, the gamemodes that people play — for all the talk about how weak the lancer is, this is the one game where competitive players collectively decided to play without lancers because throughout the game and for different reasons with every tuning, they’re overperforming.

People have moved on, they’re playing other things — even in 2020/21 the years of gaming, GoW dropped off.

To me, this is a clear sign of a game that’s not “failing” it’s a game that has failed. The games problems started before it was launched, Gow4 was a much better representation of GoW as an IP and it survived longer. Gow4 at this point in it’s lifespan was a far more lively experience — the numbers across the board were higher.

There’s no fix for this — you could speed the game up and add the visual representation of trueskill back, it’s not going to help.

When it launched. It was tainted from all of Rod F’s bad ideas and they’ve been trying to walk back a lot of it ever since. Sadly, they decided to get it to a place where it’s “just enough” and it’s never getting better than what we have now.

Do I think it’s miles better than what it launched as and up to when Rod left? Yes, but it’s not the best it can be.

The launch of the game. It was a disaster and I don’t even know when the game recovered from that because I stopped playing for the longest time.

I would like to know how many players never came back due to the launch.

I would like to know how many players never came back due to the launch.

The trouble is the market is so much different to 2006 and the 360 days. There’s so much more choice and even without the poor launch people don’t stick around long, now you add things like Ultimate gamepass and you feel like your wasting money if you just play the same title for 3 years. I only paid a pound for 3 years Ultimate and I still feel that way

The single-player campaign bored me to tears. It has some really good moments, but the free-roaming stuff is absolute padding. I never want to drive around on ice again.

Multi; I don’t think matchmaking is the best. Stacked teams vs noobs - although QP is aimed at being casual. The removal of TDM in QP and forcing a playlist option alienated me. Those single-elimination modes are punishing with a poop team. Didn’t enjoy ranked as much for TDM. Halo has Slayer in QP, Gears 5 should too.

The maps were okay. I felt 4 had better maps. No Diner, Old Town

The maps were okay. I felt 4 and 5 had better maps. No Diner, Old Town

when they broke offline play

I think they both fair well in maps.

The game began to fail before it was even released.

Makes me wonder what was going through leaderships heads at tc

last evening, I decided to go through a cinematic cut on all the original Gears Of War (1,2,3)… man that was THE game… the atmosphere, story, plot… was on spot… not talking about, at the time, on the online side

These Gears (4,5) missed the nail completely … by any means 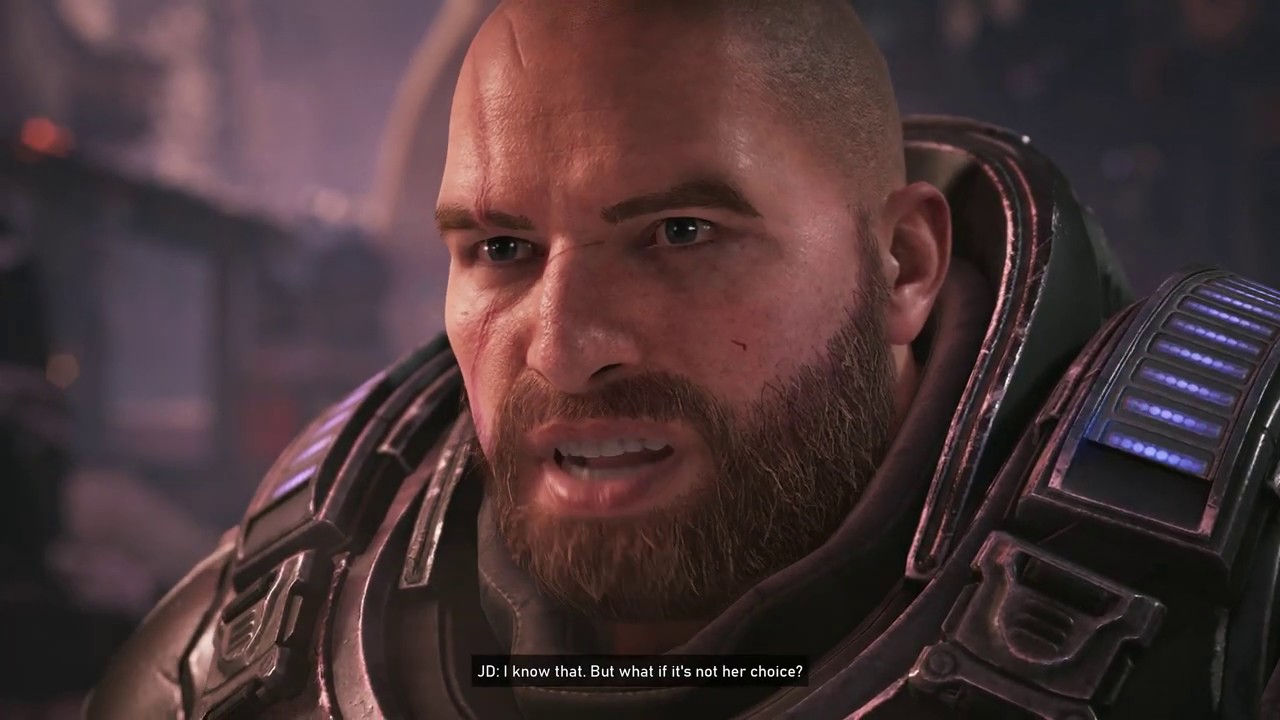 Something about this cutscene just makes me cringe.

Ever since I saw this in the trailer I knew that Gears 5 was going in the wrong direction.

After the first month when we lost 2.5 million of our players lol