Welcome to What’s Up! Your one-stop location where we keep you up to date with everything in the world of Gears. 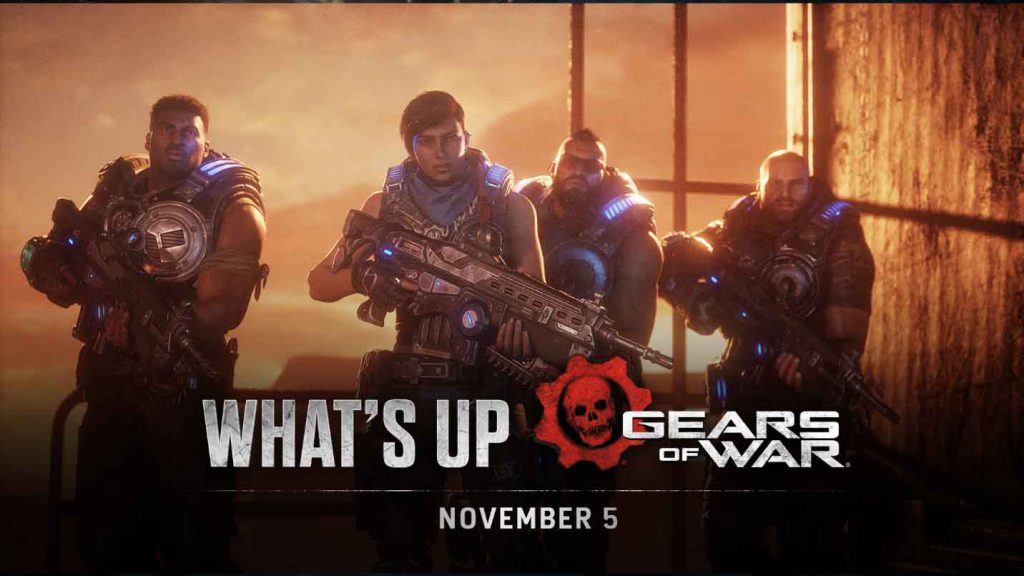 Fourteen years ago Gears of War entered all of our lives. The impact of this storied franchise is hard to measure. Since then, there have been 7 games full of jaw-dropping fights, utterly heartbreaking moments, and the deaths of millions of monsters…and of course, the billions of waves of Horde and Versus rounds.

To celebrate this anniversary, we’re rolling out a special Medal Group for players to complete to earn the complete gorgeous Destined weapon set.

You’ve got until the end of Operation 4 to claim this set.

AND THE WINNER IS…

We asked and you’ve spoken. The overwhelming majority of you have asked for Brothers to the End to be the final Versus event of Operation 4. This event will kick off next Tuesday, November 10.

For those of you that haven’t played this classic, this is a 2v2 TDM fight with just 6 respawns. Pro tip: Fighting together is the key to victory so stick together like Marcus and Dom.

We’ve also curated a dedicated map list for this event to keep the action spicy.

The launch of Gears Tactics on console (and update to the PC version) is only a few days away. This week, we’ve spent the last few days showing off what to expect. In case you missed it, here’s what’s new in Gears Tactics .

Make sure to stop by our Developer Stream today as we play Gears Tactics on the Xbox Series X and demo all the new goodies that have been added to the game.

Oh what a difference a lowercase “b” can make…

Didn’t you just say this in another thread lol?

7 great games. I make it 8 in total… Oh… of course! Yeah, we don’t class Judgment as one of the great games.

Already got the weapon set and tbh it’s okay. I’d rather they utilize the omen and do something with that since it doesn’t really make sense to celebrate 14 years of gears with Kaits face as the celebration skin.

Though with what you’ve been doing with the omen lately I can see why others might be opposed to that especially since it’s been slapped on every weapon skin now. but imo I’d rather have a special version of the omen than the Gears 5 box art. Maybe Imulsion skins with a nice animated glowie omen? Idk I feel like that’s been done already tbh but cant bother to remember.

Stars got me some coins though so thanks

if the anniversary set had a face would it be Marcus

I agree wholeheartedly and it seemed like an obvious choice but T.C. being T.C. didn’t really think and literally just slapped their games box art on the skins. Kinda lame

So boring. Events are putting me to sleep. Who cares about skins. Maps you guys, MAPS. Different experiences in gameplay please.

Game is a snooze

You’re getting maps when Op 5 launches…

More appropriate on the “official” post of this information, and I deleted the one from the other.

I agree, Marcus should be the face…then again Kait is nicer to look at…

It’s sometimes down to the little details.

Thanks for the laugh

Are we? I mean we obviously are getting new maps, but instead of TC giving us hints or something like that, they actually dedicate these “What’s Up” to idiotic things like these

I shot myself with this skin pack.