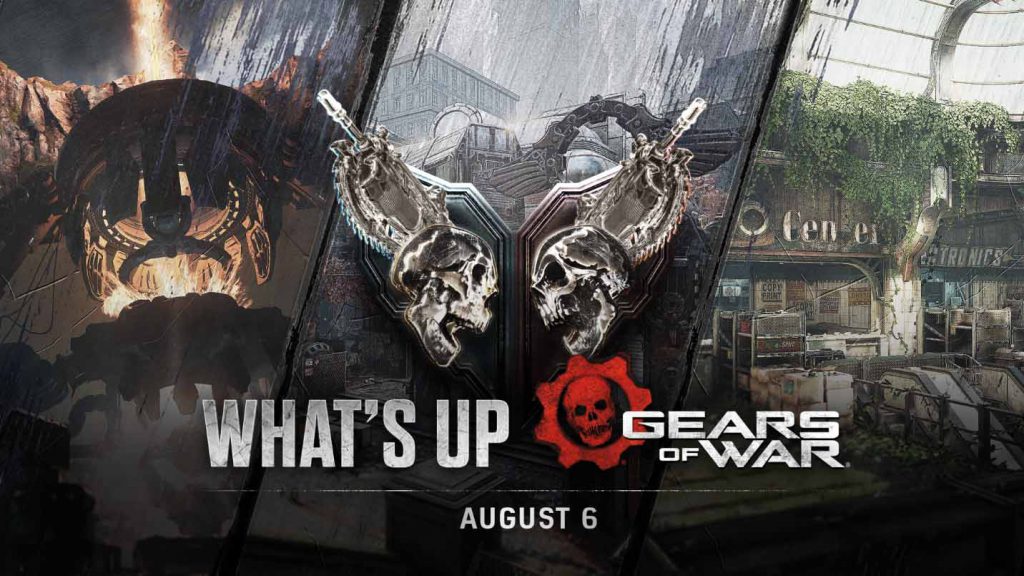 Welcome to What’s Up, your weekly overview of the big things happening in the world of Gears. After all the big news from the past few weeks, this will be a brief one.

Reminder, the Developer Playlist is live today! Check out all the details here. You can find it in Gears 5 in the Quickplay section in Versus.

Due to the extensive nature of the changes we’re testing, we know there will be lots of opinions and discussion! As such, we anticipate this playlist will be up for several weeks as gather feedback, review data and make any changes.

The developer playlist will take place in King of the Hill and custom lobbies – so you can try it out with friends in your favorite mode.

Once you’ve had your hands on it for a bit, make sure to head over to the Gears 5 Forums and give us your feedback.

Wow! It’s only been two days and the new 8 player FFA is a hit (not mention all the flashy Chrome Steel Bairds we’ve seen running around)! But we’re not done, we’re also adding 4 additional maps to the FFA rotation.

The new FFA maps are:

That’s it for us this week. Make sure to pop by the developer stream as we’ll be joined The Coalition’s Jonathan Taylor and James McAlary who were responsible for this iteration of Developer’s Playlist.

Was hoping for a sneak leak at next week’s featured horde map.

Still nothing about map rotating in guardian?? Still seems broken, although i havnt played vs today as im enjoying the xp boost.

I really don’t see the point of having two blog posts per week when one of them usually contains so little information. Just combine it together into one and be done with it.

They should get rid of them completely and only post when they actually got anything significant to announce instead of this forced BS.

I’d rather eat my own toenails than play Icebound in FFA, or any mode for that matter.

Does the developer playlist count as a Versus Event mode?

Theres really no point in a Whats Up AND This week in Gears.

Here’s a tip take all the power weapons out the playlist too . Also how can a test when I get put in lobbies with over 100ping when my ping is meant to be on 6

Now, FFA is unplayable for me :
Sticky walls + uncontrollable and slow character when approaching an opponent + and today, the key to shoot doesn’t always work or no bullets come out of the gnasher when firing…
So, I spend my time waving to others that I’m an easy target with emotes…And after, I block the players who kill me too easily and the best players without merit because there are no more merits in this game because of the bugs and the differences of ping too important between each player.

…Tired to report bugs and without solutions + with a lot of boredom in several matches,
I give up : I quit after 1min, and I don’t care about the penalties since it’s unplayable.
Maybe I’ll come back in Gears 6.

Whats Up should be renamed, to Whats the point

Damn nothing on custom FFA. Welp.

It’d be real nice if we could keep Boost at a 200% bonus currently rather than the 100% bonus it usually gives which really doesn’t make a big difference at Reup 20+. With the current bonus provided it actually lets you get somewhere if you put the work in.

Agree, this xp return we’re getting just now should be the standard rate BEFORE any boost is used.

Anything that might make it a possibility to actually reach Reup 50 before Gears 5 is down and out is a good thing in my book.

Not sure why people are down on TC communications. They never say a whole lot.

At least they have been fairly consistent in posting.

It’s not like they are ever going to change the model of not telling us anything specific about the future.

Things they should have added:

@TC_Sera any progress on what the symbols in the bottom right corner of the screen mean?

@TC_Sera replied to me yesterday regarding gears 4 achievements for skins, it was being discussed and its still gona be updated at some point

Which thread? Didn’t see it.