Welcome to What’s Up! Your one-stop location for everything in the world of Gears. Let’s get into it!

This Tuesday we rolled out a title update with some much-needed bug fixes, changes to the Ranked, some new content and more. Unfortunately, the update didn’t go as smoothly as we would’ve liked.

The good news is you got new characters early (see below) and the team was able to address most of the hiccups. Unfortunately, the announced PvE changes didn’t get deployed as intended due to last-minute localization error. We will provide an update on timing as soon as we know. 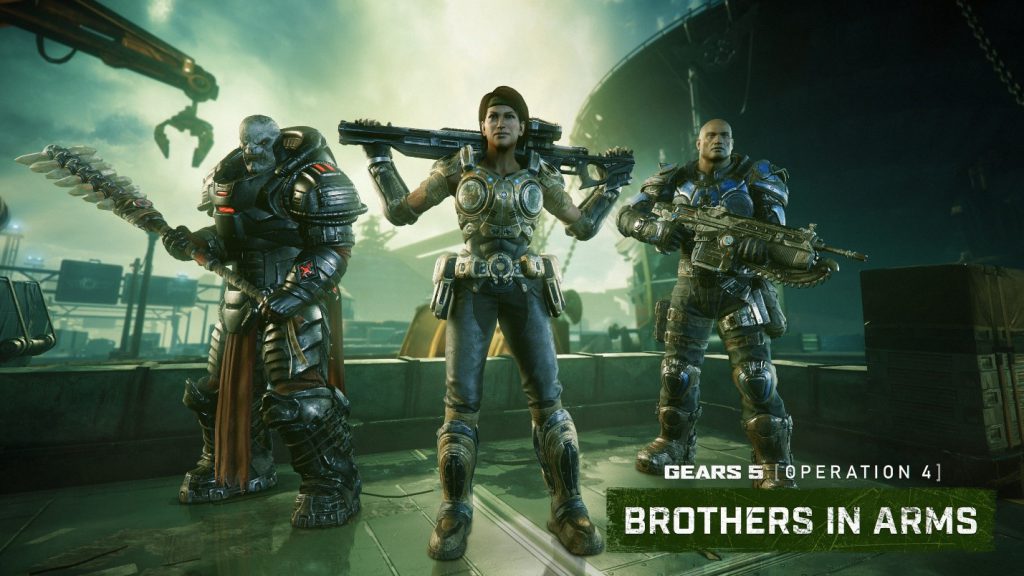 For those of you that missed it, the contents of our Gears 5 Anniversary celebration made an early debut this week so we moved up their release to today. All items are in the store now!

For those of you asking, the contents of the pack (we love V-Day Sam too!) will eventually be available individually in the store but it won’t be for a while.

Calling Xbox Game Pass Ultimate members! We’ve added Perks so you can get free content just for playing Gears 5. The Gears 5 Perks Starter Pack is available now. Claiming your Perks is easy, just visit the Perks gallery on your console, the Xbox App on Windows 10 PC, or the XGP mobile app.

That’s it for us today! Make sure to join us on the stream today as Lead Designer Andy McKenzie will join us to talk about achievements, events, and more!

Unfortunately, the announced PvE changes didn’t get deployed as intended due to last-minute localization error.

PSA: Game Pass Ultimate has a deal now where the first month is $1.
You can claim the perk, then cancel.

It’s just a shame that despite the promising nature of the update, the Gnasher’s hit detection is seemingly worse than ever before and the movement is slowed down to the point it’s thoroughly unenjoyable.

My Horde crew and I were excited for these PVE changes especially for the Engineers. Really annoying.

This deal is only for people who previously were not on Gamepass right? I see the icon in the store for Gamepass Ultimate where the original price is crossed out and repleased with £1, but when I actually click on it, the next page reverts back to £10.99 per month.

I guess I am not sure. My wife has Ultimate and I did this to get the perk as well. I have had Game Pass before, but it worked for me.

Was that weapon set a esports pack a while ago? Good day for freebies. Got a walmart $60 coupon and now this. Free is my favorite word.

My Game Pass only expired about 2 weeks ago. I decided that it’s just not worth the money as I’m old fashioned and like to own physical copies of games, and I don’t play a super-wide range of games so I don’t get the benefit of being able to have a taster of everything on offer. I went back to XBL Gold instead as it’s just cheaper.

I wonder if maybe there needs to be a cooling off period before I can be eligible for these kinds of deals?

It was in a bundle around launch.
Sort of disappointed that it was the version of Winter Marcus that was in the TOD, but the weapons, boost, and coins are very nice indeed.
@Bleeding_Pepper I hope you figure something out.

ok thx for the info. I had a friend that bought them but sadly she has moved on to other games so I knew it wasn`t a new skin. Disappointed with marcus skin too but happy for the other things.

When you say you had game pass before, was it game pass or game pass ultimate?

And @Bleeding_Pepper The dollar deal is a 1 time thing. I was trying something out on my smurf account. You’ll get offered a cheaper rate after awhile

I had regular until my wife got ultimate. I have used Ultimate from a free month code that came with my Xbox, but didn’t actually subscribe.

Would a code for 14 days free work?

They don’t work to add days when you already have it.

What if we already have that Collectors Marcus?

The weapons are returning content as well, but there is boost and free coins.
Nice, for a give away.

What if we already have that Collectors Marcus?.

You get the new item symbol over the Marcus card but that is it. It is not like Gears 4 where you could get several duplicates without being able to scrap.