I am seriously curious as to why 06 vets are obsessed with the original Gears 1 or more specifically how it’s “dark and gritty.” Never about Gears 2 or UE. Every single time I see the words “dark and gritty” and any other complaints about 4/5’s graphics, it’s almost guaranteed to be only about OG Gears 1 and nothing else. On top of that it’s followed by claims about 3/4/5 are “too cartoony” whatever that means and the lack of gore (anyone who has played Onslaught Act 2 with DR1 spawn on X1 would know why there had to be a compromise).

This is not an insult by any means, just curiosity.

Well i can’t speak for the 06 vets but the reason i prefer the dark and gritty asthetic of the first 2 games over later iterations is because they suited the story better in my opinion. For me it gave them that classic B movie feel, similar to the early action films of Shwarzenegger. Gears 3 felt a bit more Holywood blockbuster in it’s story and the added colour and brightness helped reinforce that shift in perceived quality.

People don’t just talk about the graphics when they say “dark and gritty”. It wasn’t just the grey filter that made the games feel more dreary. Everything about the way characters talked with each other and reacted to the environments made the experience just feel more personal and grittier(

Personally, for me, GOW 3 felt more cartoony because of the way bodies reacted to getting gibbed and the larger set pieces meant that plot armour was more prevalent and easily noticeable. It at least made up for this through the characters and the set pieces were fun and awesome, unlike Gears 5 where the characters just didn’t sit right with me and set pieces were just not all that fun, like for example the truck ride at the end.

Gore was one of the big things that peaked my enjoyment of GOW 1, and seeing it get the treatment it got from 3 onwards was a bit disappointing.

You had to be there… Mannnnnn

For what it is worth I’m 06 player albeit campaign and the graphics suite the tone and atmosphere perfectly as does 2. UE was far too “clean” I do love the gameplay though both in sp and mp.
My fav Gears is 3 though and I think it mixes things up perfectly from Sandbar to RD. J does a good job of this also.

4 and 5 are more “cartoony” certainly the blood and gore, but I think a lot of the maps in 5 do harken back to original Gears.

why 06 vets are obsessed with the original Gears 1 or more specifically how it’s “dark and gritty.”

Imagine If Dark Souls shifted its environment away from gothic buildings. It would by no means be the same game. Bloodborne took place in a more up to date time period yet was still able to keep that dark horror vibe.

By no means will I ever use the term “dark and gritty” unironically and I think most people saying it are brainwashed drones who can’t come up with their own opinion but I can understand being upset coming from Gears of War 1 and 2 scenery to Gears of War 4 and 5’s bright Tundra and Desert look.

I hate Gears 5 setting and story with a passion.

If I could go back and experience that 2006 glory again I would. The game was beautiful and absolutely outstanding for it’s time. The very dark shading and lack of vivid colour added to the feel of a war-torn and miserable environment.

Anyway this all added to that “horror” element of being consistently hunted and assaulted by monstrous beings. Not to mention the introduction of the Kyrll in Act II. This design and feeling has just never been reached again, even in UE despite getting close.

Gears of War 2 took a slightly different turn, as it was a much larger game in terms of level scales to match it’s new emphasis on the size of the war. It was absolutely beautiful in it’s own way. It’s gore was also great and very detailed, no complaints there.

Gears of War 3, the beautiful thing it is, was similar to it’s direct predecessor but being much brighter due to being set in Sera’s variant of “Summer”.

Gears of War 4 and Gears 5 both had good graphics but the design was far too cartoony and only got worse with the latter. Gore is still very much present but there is little effort in the detail of both the blood and the dismembered body parts. The blood just looks like cheap red paint in both these games.

on xbox.
Speaking of Gears 6 I wonder if we will get “proper” Gore back, I would like that, maybe at the expense of banners and the blooming laugh emote thing, unless Myrrah or Sam of course

You’re not a true fan if you like the current graphics style
-06 gears vet, circa 2021

If it means I actually get value out of the system I’m paying money for, I’m all for not being a “true fan”.

Maybe it’s just me being a zoomer or being so used to 4/5, but I have no idea what people really mean by the newer games looking “cartoony” outside of the gore and the emotes I guess? I am genuinely confused as I have a hard time finding out where people are getting the idea of them being “too cartoony” is coming from outside of those two things.

My issue, as I’ve outlined in other threads is that alot of '06 Veterans present themselves as being superior and use their status as an '06 Veteran alone to slag off other fans and their views without presenting much substance.

A good solid opinion stands on its own two feet. A poorly made point condemns itself.

Another side point, is that the art aesthetics, means relatively little to me (especially comapred to other issues). To say that GOW5 is now like Fortnite is inaccurate, a misnomer and a gross exagerration. Secondly graphics in itself does not address gameplay issues. I just think it’s often a distraction away from far bigger issues about the game (and sometimes the industry as a whole). I don’t mind the aesthetic look of GOW5. I’m much more concerned about the PVE side of the franchise. As a PVE player I won’t comment on the PVP side of things, but for me GOW5 PVE started out as an unbalanced mess which was a mess for a fair while (several months) before it slowly and gradually got better. It wasn’t until around Operation 4 that there was a big jump in improvements and it was in what I’d call a decent state (and then Op 5 and subsequent Ops improved it even more).

Ditto. For me it’s a massive exagerration when people say that later GOW games are too “cartoony”.

Maybe I’m biased to a point, but when I see threads making these points of view and read them, I personally find that the threads themselves have either no, or very little substance and don’t adequately explain what they mean. All I see are very vague statements and words. It may be that the writer knows what they mean, but they don’t seem to be able to articulate it clearly for other people in word form.

The emotes, blood sprays and marks are pretty rubbish additions, fair enough. But I think that’s more reflective of the microtransaction side of the industry so TC could create and sell these things. It’s also to pad out the cosmetics side of things in earlier Tour Of Duty’s - you just reached Captain 5 - you unlocked a gingerbread man blood spray instead of an actual weapon skin set which we would have created if we had a larger art team!

The emotes, blood sprays and marks are pretty rubbish additions, fair enough. But I think that’s more reflective of the microtransaction side of the industry so TC could create and sell these things. It’s also to pad out the cosmetics side of things in earlier Tour Of Duty’s - you just reached Captain 5 - you unlocked a gingerbread man blood spray instead of an actual weapon skin set which we would have created if we had a larger art team!

We saw little bits of it with the flower and rainbow weapon skins in 3 and then TC just went full force with the Trippy and Color Blast skins in 4 just to lessen the chances of getting the stuff you wanted in the loot boxes. I guarantee the amount of people who geniunely wanted those skins will be fewer than the amount of people who use Jinn in 5.

Yeah, that occurred to me as well. I remember buying one of the GOW3 DLC packs and it also came with the Chocolate theme weapons. I remember thinking to myself “why?!”

I even disliked the special limited edition Golden Lancers etc. I think that might even have been GOW2. It just seemed out of place.

I think this was the one you were referring to from gears 2 correct? I never liked how there was no golden gnasher and I always hated using skins from different sets. 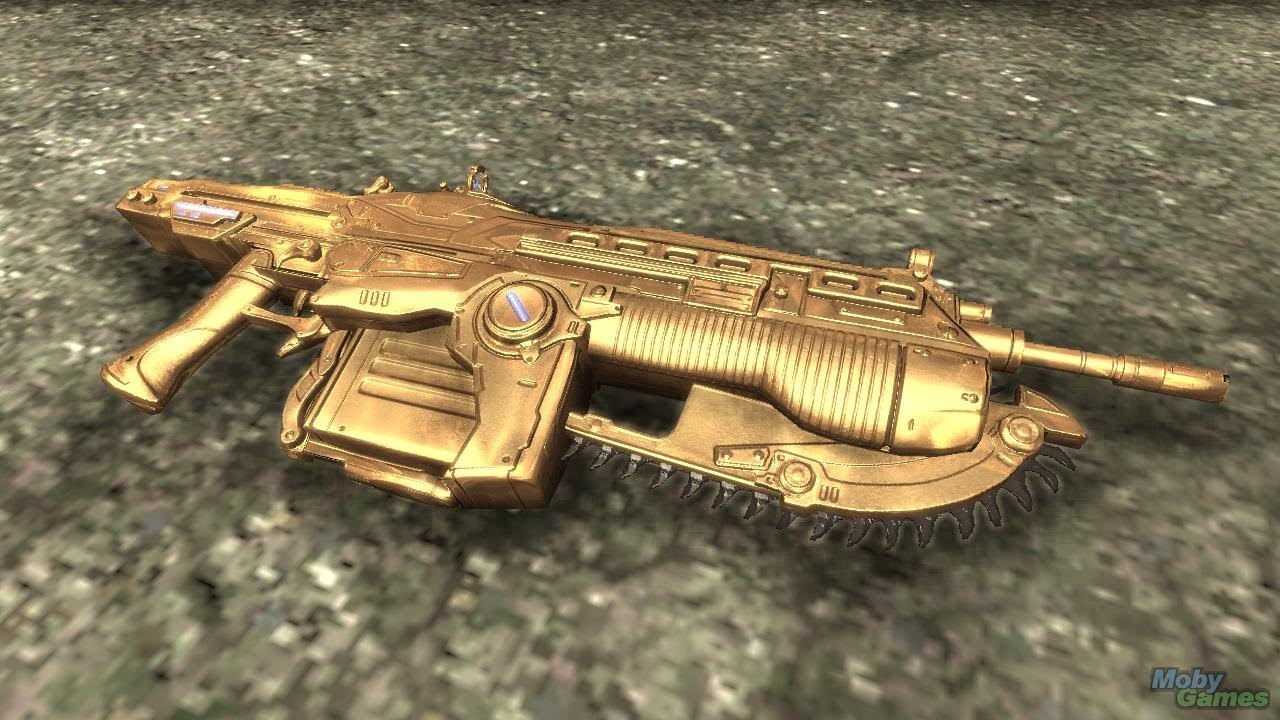 I guess these vets forget that the 360 had limitations as to what it was able to do at the time. But better to move on and try to keep up with other game’s while being left in the dark. I give props to TC for not giving up and not being phased by these “Gears YouTubers” and actually trying to keep the franchise alive.

Lets face it, the population started dying after Gears 3 and EPIC made it worse with Judgement.

Lets face it, the population started dying after Gears 3 and EPIC made it worse with Judgement.

It really didn’t help that Xbox’s popularity in general started to severely dwindle after E3 2013 and it still hasn’t recovered since then.

Only like 4-5 people I knew in High School had an X1 while everone else had either a Switch or PS4.

This hidden part is the long version.

TL;DR Asking back for Gears 1 graphics in 2020 and onward is not keeping up to date with graphics development as a whole, and is a disrespect to the hardware and software advancements made since “muh greatest Gears” came into the world. And if the fact that we get some pretty colors in Gears is the biggest issue to be had with a game, honestly, it might be time to look at something else to play, or reflect on whether you actually have issues with it instead of just being stuck in the past and refusing to admit that games can be “serious”, so much as that term applies to a virtual context in a virtual world, without being completely bland and boring to look at. The latest FNAF game sure doesn’t fail at being a horror game because it’s largely set in a vibrant arcade-esque building.

Note that I don’t count the New Day nonsense, but that is a different level of stupidity that is awful for completely different reasons unrelated to artstyle… well, besides their color choice but they aren’t even part of the “canon” Gears universe anyway, and it’s not really an argument for MP stuff anyway.

Only like 4-5 people I knew in High School had an X1 while everone else had either a Switch or PS4.

I feel this. Most of my friends in college are gamers, and not a single one plays on Xbox. Most are PC, with a couple PS and Switch players here and there

Edit: I take that back. There are two with an Xbox