In this week’s What’s Up, get the low down on Title Update 1 and some Store pricing changes. 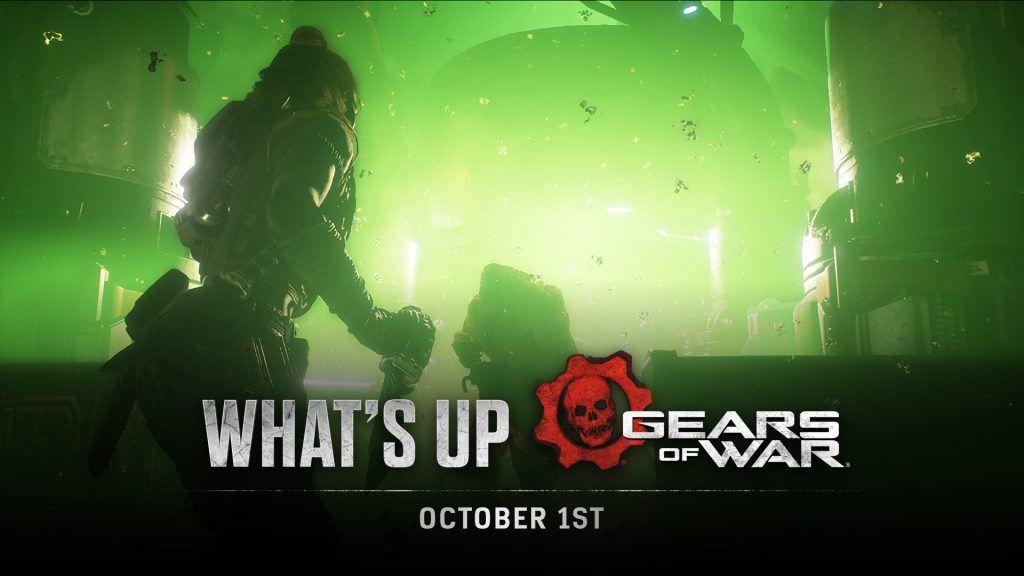 Back by popular demand, it’s What’s Up – your weekly update on all the latest news, game updates and more in Gears 5 and beyond.

We heard your feedback and reduced the prices of a wide range of store items. Please note, these changes will roll out over time as we add new items (and prices) over the coming days and weeks.

We also want to provide some clarity around how you will be able to acquire select group items like weapon skin sets. While the Rainbow Swirl lancer and gnasher are purchasable, other weapons in that set will be earnable for free in the next Tour of Duty.

In addition to reducing prices, we’re also looking at ways to increase the visibility and value of Banners and Blood Sprays before and during matches. For example, Blood Sprays are designed to be a way to taunt opponents by giving a reminder of your dominance. We’re currently concepting ways to have the blood spray appear on the kill screen of an opponent after they have been executed – hopefully that middle finger blood spray will get a lot of more personal. Stay tuned for more updates.

As always, we will continue to listen to you and make further adjustments.

Our first major Title Update will arrive tomorrow, October 1st. Our first Title Update is focused on fixing some of the most impactful issues reported by the community, with more Updates to come over the following month to address more issues with longer development times.

Here’s what you can expect in Title Update 1:

As part of our continuing support to evolve the meta of our PVE modes, new Skill Cards are coming for Mac, Keegan and Lahni for FREE beginning tomorrow!

These Skill Cards provide strong new bonuses when playing in the Venom for Keegan and Lahni, plus an additional Venom-based option for Mac. If you like to live dangerously, builds with these Cards will benefit you greatly – but only if you can survive on a knife edge.

Here’s a list of the upcoming Skills with their Level 1 Card values listed below:

Each new Skill Card will be added to the Character Progression path for each Character at the listed levels.

If you have already passed the level requirements for the Skill Cards, we will be retroactively rolling out these new Skill Cards to eligible players within 48 hours of our Title Update releasing.

WHAT WE’RE WORKING ON

While some crucial fixes have made it into TU1, work is continuing on a number of other community reported bugs and requests that we’re looking to address over the coming months. Here’s our list of some of the most notable fixes or changes we’re working on based on community reports:

(As a reminder, tuning or server-side fixes – unless otherwise noted – can be resolved with live updates. This list is just a reflection of key issues we’re working on and does not include design-related feedback.) 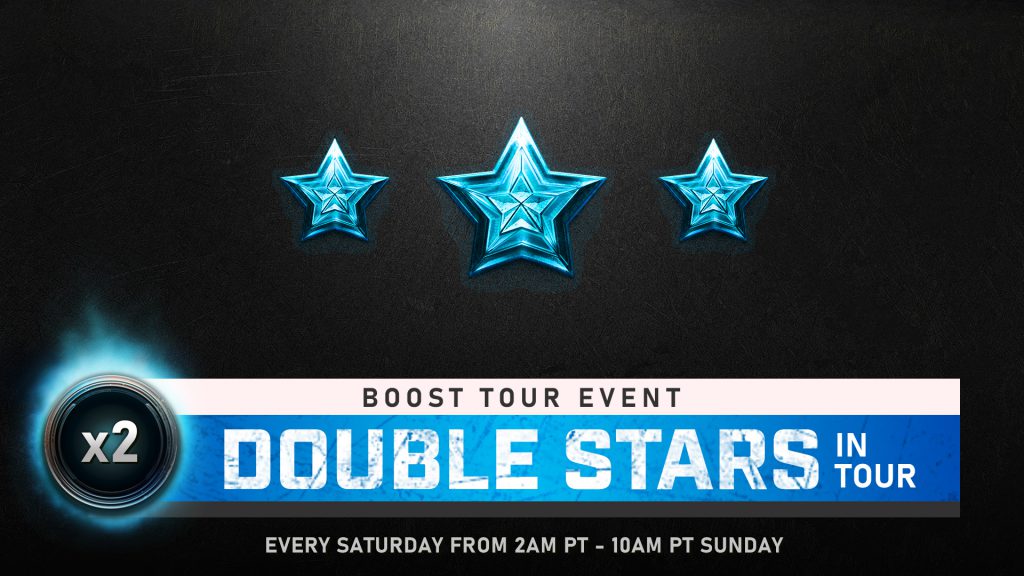 We saw plenty of you make some significant progress in your Tour of Duty during our last Double Star event for Boosted players.

Based on the results and generally positive responses to the event, we’ve decided to turn on Double Stars in Tour every Saturday for Boosted players at the same times!

As a reminder, Double Stars only applies for Tour Objectives – not medals – and for players with active Boost.

October sees the return of Versus Special Events!

Over the coming months and years ahead, we’ll be bringing you a different Versus Special Event playlist every week – from classics like OSOK to new modes to fall in love with. We’ll also be tweaking some of your old favorites based on your feedback to continue to evolve the experience our special events provide.

Arcade Double Trouble is simple – all skull gains are doubled! In this fast and furious variant of Arcade, new weapons are going to be appearing on the battlefield every second. Think fast, slay fast. 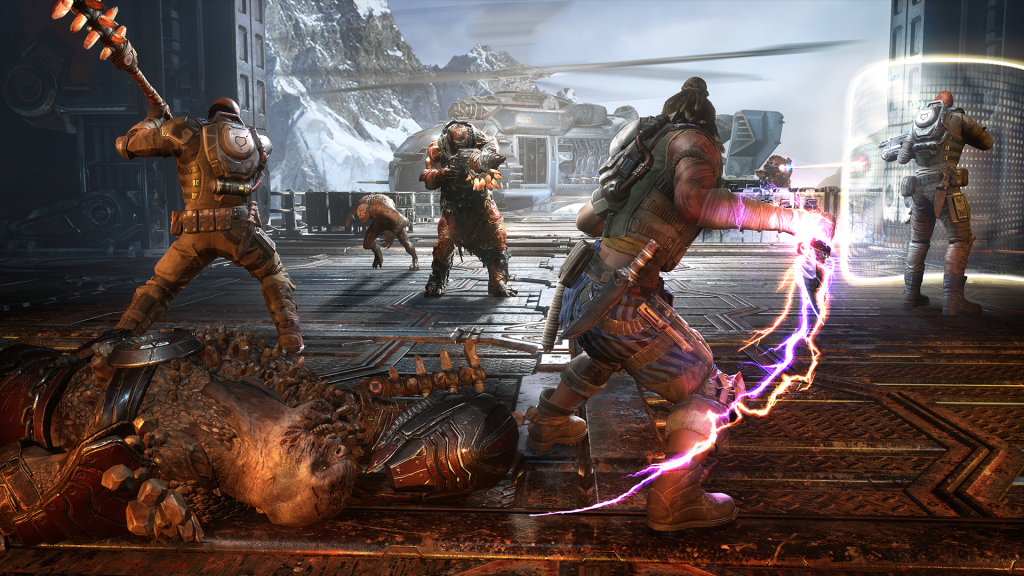 With the exploit and leaderboards issues resolved as of TU1, our weekly rotation of new Featured Hives is unpaused and ready to roll!

This week, you’ll be jumping into The Surge, a highly customizable Escape experience featuring modifiers that enable different kind of enemies. Use the modifiers to create your preferred Escape challenge, or be brave and fight them all at once!

This week, we’re adding our first Character Skins into Supply with Del’s Classic Gears 4 Skin! More Gears 4 variants of other characters will arrive in future Supply Drops. Remember – if you really want a specific skin, save that scrap and craft them directly from the Customization Menus.

Here’s this week’s drop of Supply content arriving Tuesday at 10am PT: 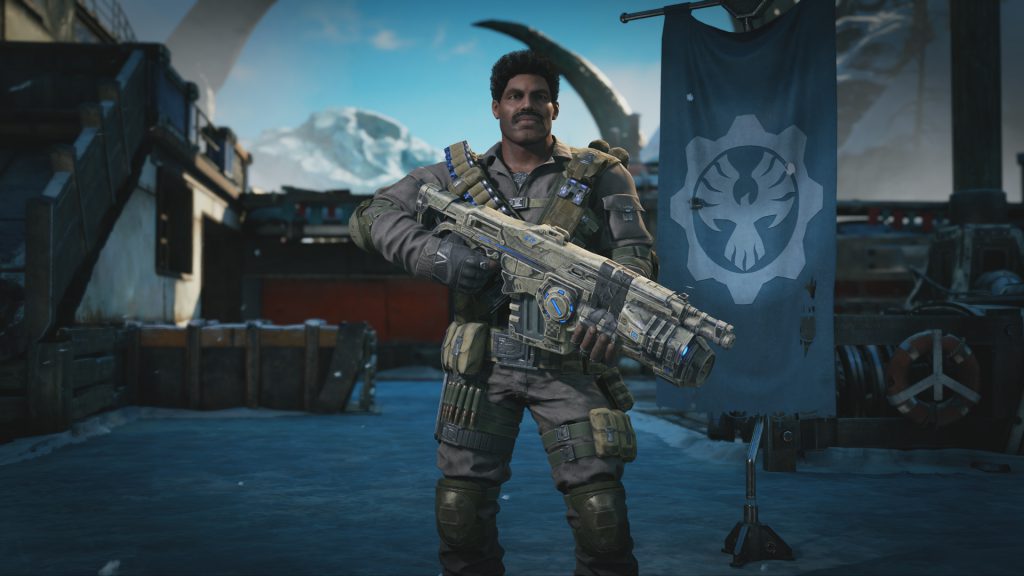 Don’t forget, next Tuesday will see a brand new collection of content available in the store while this week’s collection is vaulted.

Ryan Cleven, Multiplayer Design Director for Gears 5, will be joining us on this week’s Community Stream to answer your questions and address hot topics in the community. Don’t miss our Gears Weekly Developer Stream at 3pm PT on Thursday on live.gearsofwar.com.

We’re also close to finishing a blog on bullet mechanics in Gears 5 based on videos circulating in the community. This blog will include transparent comparisons to other Gears games and explanations for the mechanics at play – which are not aim assist related – in the videos captured by community members.

Stay tuned for more info in the future. See you on Thursday!

No patch notes yet…

Probably putting Delivery Driver Mac back in the store

Lol we can only hope! But Shadows was just using quartermaster Keegan in stream so that’s likely what we’re getting. All the DDM fans are preparing to revolt.

By popular demand! (Not!!! ugly character and it’s even worse when it’s one of the first featured characters)

Should have specified, sorry, console for me.

4.28GB for my PC. Dont know why it’s different from your download

The new What’s Up was just posted as well a few moments ago.

Beat me to it.

Yeeeah, none of it really excited me too much lol.

Hmmm, so nothing critical patched nor noted as being worked on i.e. balance, servers, general hit detection problems.

Unless they cover that on the next stream of course.

But on a side note, I like the Double Star Saturday thing.

Disappointing to see the new characters aren’t in this update.

Was looking forward to trying out the COG Gear in horde/escape and seeing what type of ult and skills he has.

nothing on horde really…like how you can play multiple days of the game mode and not receive a single purple or yellow card while on insane or higher difficulty. this is why people try to exploit it. it’s impossible to have all the cards needed to really find the balance to.

Doesn’t this tour end beginning of December? I thought we were getting new characters. I wonder when they plan on releasing them.