In this week’s What’s Up, we reveal 4 new Characters coming to Gears 5, TU1.5 patch notes and more! 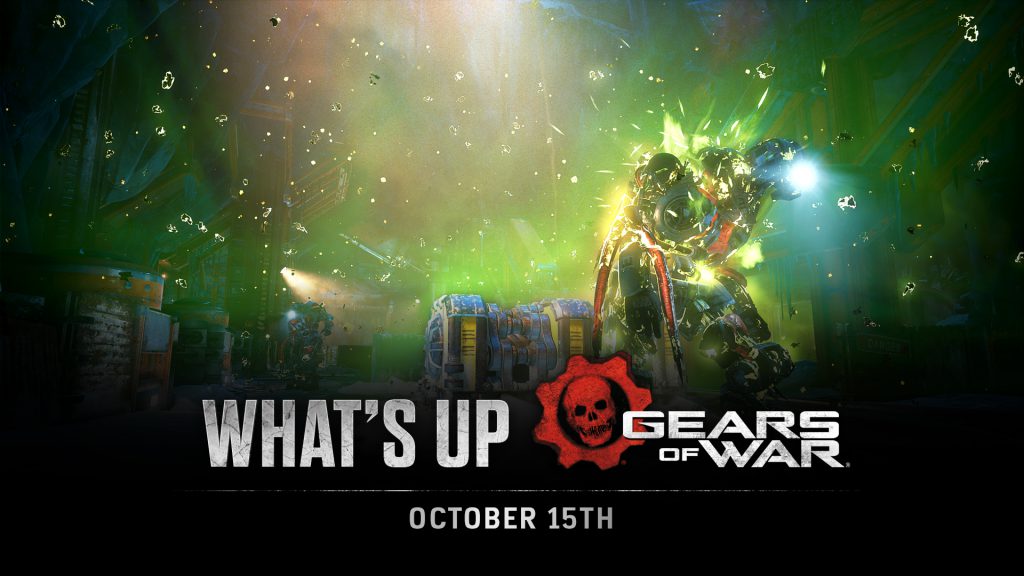 New Characters will arrive with Title Update 1.5 on Wednesday!

Keep an eye out for a full announcement tomorrow, where we’ll reveal the entire lineup of Characters coming in the update along with a first-look trailer.

Title Update 1.5 falls out our usual monthly cadence of Title Updates to add gameplay and functionality to support the new Characters, making it smaller than our usual Title Updates.

Unfortunately, a last minute issue was discovered with blocking Flashbangs working through cover in the hours prior to submitting this update to certification. Due to this, we were unable to resolve this as planned for Title Update 1.5, and we hope to resolve it in time for our next Title Update.

We have another update on the way in early November to add further improvements and bug fixes. Stay tuned for more information over the coming weeks. 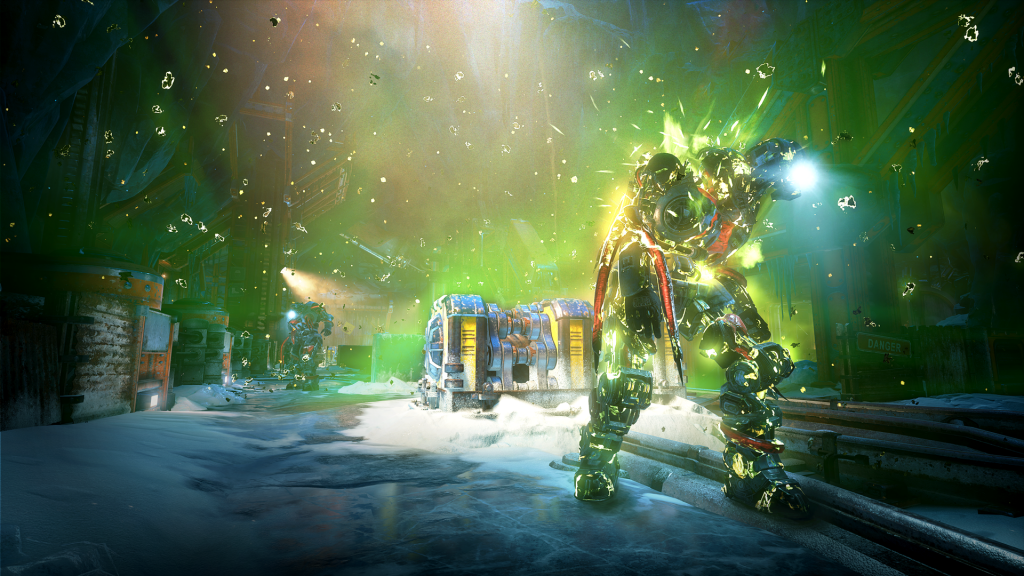 The next weekly Hive to drop for Escape is known as Venom Run!

In this one act Hive, the focus is on pushing forward fast thanks to an aggressive Venom behind your back.

Tougher Mutators include Ultra Stopping Power to slow down your advance, Even Faster Venom that is barely slower than your roadie run speed and Deadly Close Range that adds additional threat to your close quarters encounters.

The weekly Escape Hive will be playable from our weekly reset at 10am PT on Tuesday, October 15.

Arms Race Unchained is this week’s Versus Special Event playlist!

In Arms Race Unchained, you’ll play a shorter high action version of Arms Race in a first to 2 rounds format. The Arms Race Unchained weapons list focuses on new weapons introduced in Gears 5 with a couple of favorites mixed in – from the Lancer GL and Claw, to the Talon and Breaker.

Arms Race Unchained will be available with the release of Title Update 1.5 on Wednesday, October 16.

In case you missed the news, every player in Gears 5 will get this Curbstomp free once Title Update 1.5 arrives on Wednesday!

We’ll have more Curbstomp variants to come in the future, including some old favorites we know you want to see make a comeback.

Here’s this week’s drop of Supply content available ~4 hours after the release of Title Update 1.5 on Wednesday, October 16:

This week’s Weekly Store Items include a variety of new items including an homage to the spinning Curbstomps of yore and a Gears 1 themed Jack skin! 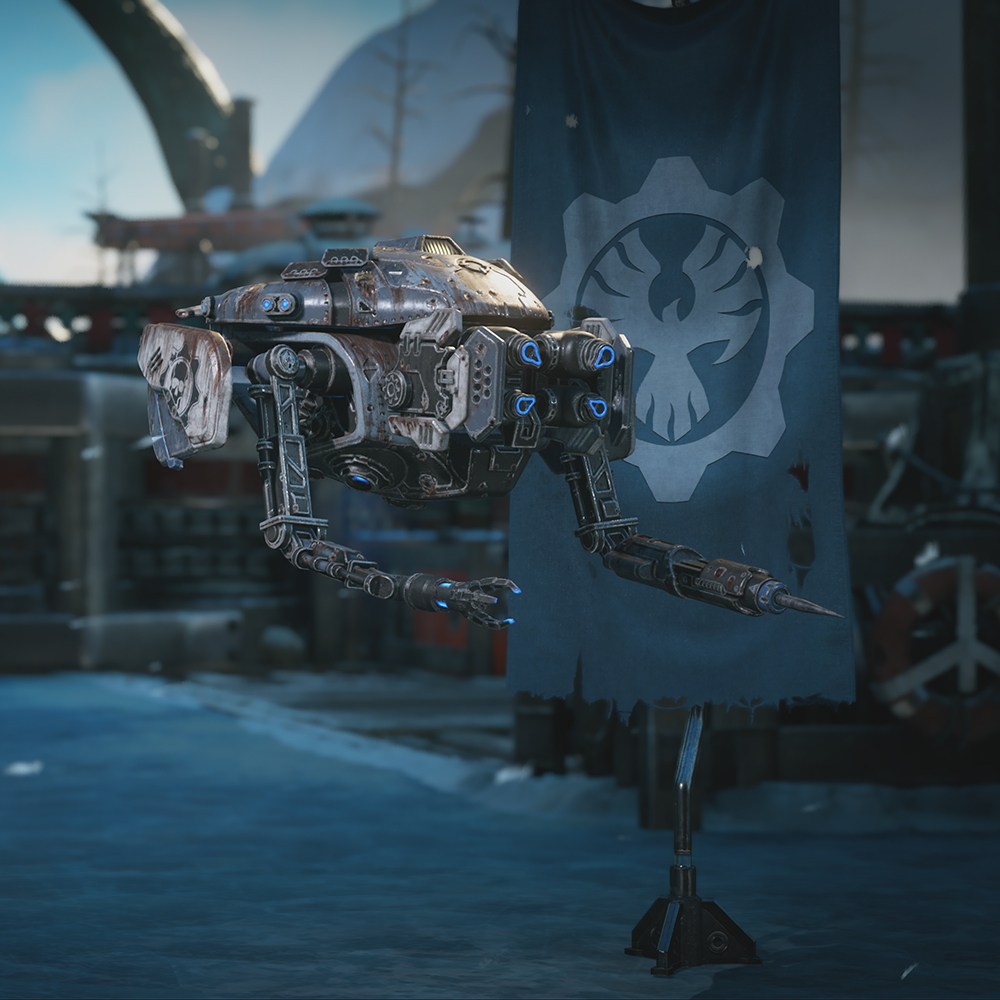 Don’t forget, next Tuesday will see a brand-new collection of content available in the store while this week’s collection goes away.

Combatting quitters is one of our top priorities at the studio, and with our launch settled, step one was to re-enable time suspension penalties for players who quit.

Behind the scenes, we track quits with a value known as RCR (Ranked Completion Rating). Every match you quit adds a significant number of points to this, and finishing matches will reduce your RCR total gradually over time.

For players who have a disconnect or issue that causes you to leave once in a blue moon, you’ll be fine. For players who quit often, you’ll see an increasing time penalty for your actions – from hours, to days to months.

If you enter into Ranked, you are committing to playing your match in full, win or lose. Don’t quit or face the consequences.

The team is continuing to work on a number of improvements and fixes for Gears 5 that you can track on Gears 5 | Gears 5 Status.

We are also continuing to examine your gameplay feedback to determine future changes, and we already have active conversations on a number of hot topics throughout the community such as how we can improve Tour of Duty for Operation 2.

For now, we hope you’re excited to get out there and earn some new Characters as we approach Operation 2 this December! Stay tuned for a juicy trailer just before we go live on Wednesday to give you a taste of these new Characters in action.

Meet the four new Characters joining the Gears 5 lineup today, including how to unlock them! 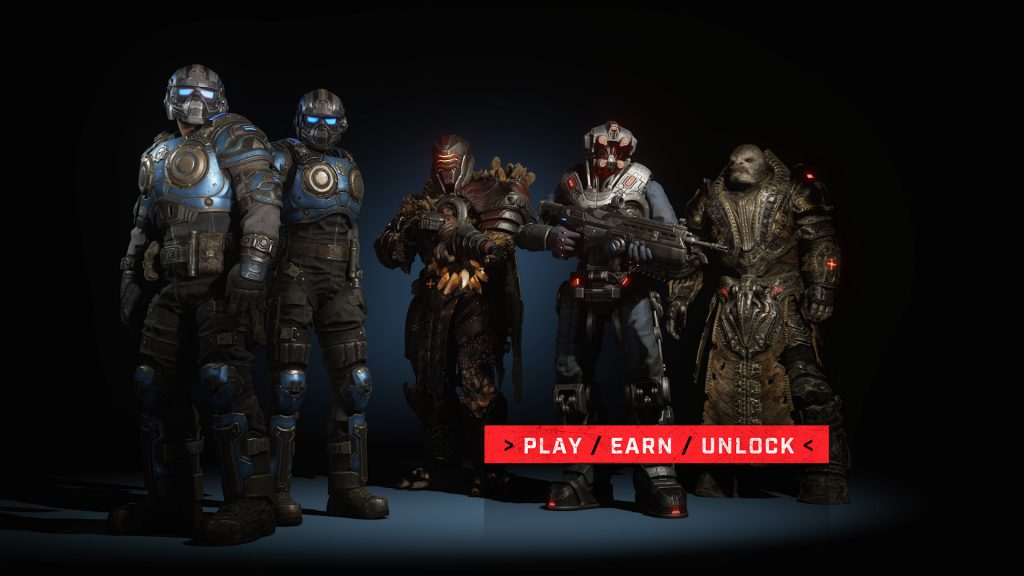 The first wave of Heroes and Villains characters for Gears 5 are about to arrive this Wednesday with the introduction of the COG Gear, DeeBee, Warden and General RAAM!

In Gears 5, a character is their identity – for example, Fahz, RAAM or Swarm Sniper are all considered Characters.

A character skin is usually a version of that character that looks different from their base look – for example, Batista is a skin for Marcus.

Unless otherwise listed, COG Team Characters – known as Heroes – come with unique gameplay for PVE with new Ultimates and Skills, along with Arcade Passives and Loadouts.

And of course, outside of the gameplay they bring, all unlocked characters can be used as skins in standard Versus Multiplayer.

Now that you know what characters mean, here’s a look at each of the four characters joining the Gears 5 Roster.

PVE Passive: Enemies that die with your mark reduce the cooldown of your Ultimate

The backbone of the COG Army, the COG Gear is a strong support character that brings teammates back into the fight!

Their Ultimate Ability instantly revives teammates from across the battlefield, saving the day in both Horde and Escape. Their PVE Skills focus on supporting allies, including providing Stim to teammates and tougher damage resistance to keep them in the fight.

*Note: Due to DeeBee units being present in PVE modes, the DeeBee is one of the only exceptions where a COG Team Character (ie. Hero) will not have gameplay abilities in PVE.

*Note: Players who earned Gilded General RAAM through the Road to Gears 5 Challenges in Gears 4 will automatically unlock General RAAM as a Character for Arcade, including the base RAAM Character Skin.

ADDING CHARACTERS TO YOUR COLLECTION

Adding characters to your collection can be done one of two ways – earning them via the new Totems system or purchasing them directly through the Gears 5 Store. We believe each character will take approximately 10 hours to earn – even faster if your good! If you don’t feel up to the grind, each character is also available for purchase {INSERT PRICE}. The choice is yours!

Totems are your new way to unlock Characters in Gears 5, opening up a path of Challenges to complete in order to add the Character to your collection.

Under the new Totems section in the Customization Menu, spend 100 Scrap to craft the Totem of any Hero or Villain character you want to unlock.

Equip your Totem to activate tracking for character challenges associated to the Totem. Note: Only ONE Totem can be active at a time and must be equipped to track progress.

Versus: Complete 40 Rounds of Versus

Horde: Survive 50 Waves of Horde (does not need to be in one match) – any difficulty

COG Gear: Get 200 assists as a COG Team character in Versus, Horde or Escape

DeeBee: Get 100 Reject kills in Horde or Escape

Once you complete all Challenges, your character will unlock!

Characters are also available to purchase for instant access via the Gears 5 Store for 500 Iron, including 3 days of Bonus Boost.

In future Tours and the Store, character skins will become available for characters you may have yet to unlock.

While you can purchase or acquire these Skins like any other, you need to have the character unlocked in order to use them. If you do end up in this situation, your character skins will be ready and waiting the second you unlock the character.

Speaking of character skins, we know you’ve been keen to get your hands on the Gears 5 Onyx Guard. In our next Tour of Duty, coming in December with Operation 2, you can earn the Onyx Guard skin for the COG Gear. The wait is almost over Gears fans!

All 4 Characters are available beginning today at 12pm PT! Who will you unlock first?”

Wait so are they locking the curbstomp animation we all actually wanted behind 500 iron and the new one is free as part of the update?

At least we’re getting Classic Kait, Laugh Expression and new Characters tomorrow. They’re the only interesting things from here.

Yeah but what I’m wondering is which model they use. Gears 4 Anya’s Armour or the one from Act 1 with beanie.

Can’t wait to see some of the characters that we should already have xd. We probably won’t even get all of them. Paduck will probably come in december for example.

It’ll just be a reskinned Gilded Kait. The model is already there, just needs recoloring.

So what would you call this one?

This can either be Classic Kait or another Kait skin which they may release in future.

This wording worries me lol. I’m hoping they just mean for the team opposite the quitter, instead of all players in the lobby.

Having the quitter on your team should result in reduced skill rating calculations, since you’re now gonna be getting pummeled.

Yea after reading this people are gunna be pissed, and TC knows that people will buy it, it seems like a cash grab to me

I’d call that the default skin that should already be in the game. I’m not sure what the Gilded Skin is based on since I don’t have it, but I guarantee you it’s going to be a recolored version of that.

Gilded was based on Anya’s Armour from Gears 4.

If you ignore all of the other words, then yep, that’s exactly what it is.

Yeah. That’s the exact one people meant. The greed. Ah well, not forced to buy it.

Edit: I say it like that because its apparent their greed won’t go away.

Ummm… anything about the weapon duping glitch?

No, ok. Not like it’s absolutely game breaking or anything.

I’d be happy if they added that Act I skin to the game though. I always liked that look for Kait, and I prefer the chunkier armor they use here in 5. I’m really not sure why it’s not already available because you’re right, it is different from her Gears 4 default.

I gather they won’t fix the ammo capacity of the lancer neither the scarcity of ammo boxes on horde as I understand.

Most of their efforts are towards Versus and Escape wich I couldnt care less.