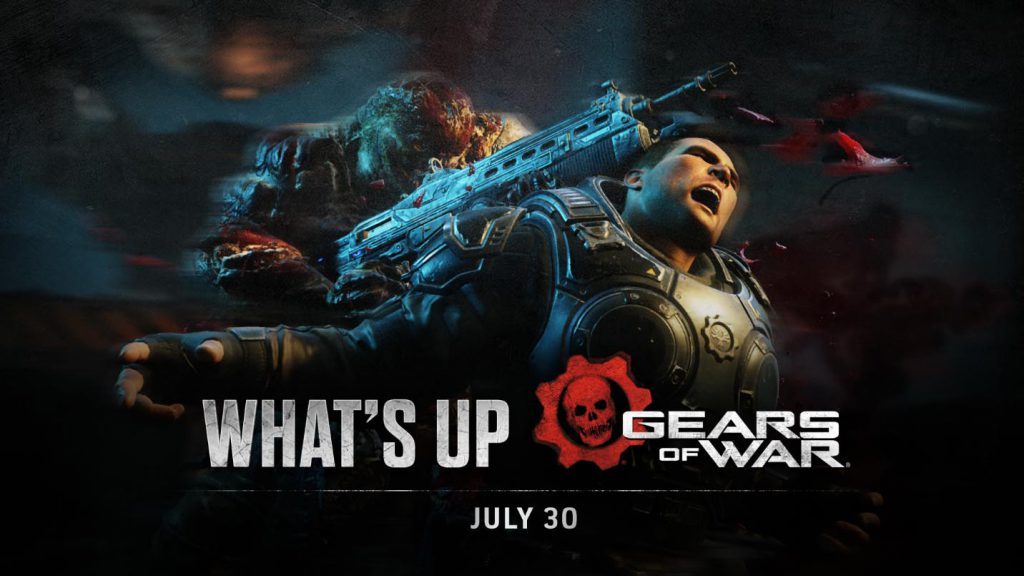 Welcome to What’s Up! our weekly blog where we recap everything big in the world of Gears. In What’s Up this week:

We’ve got some exciting updates for Ranked that we believe will improve certain modes.

Note: 8 player FFA will also be the new mode in Quickplay. These changes will be live on Tuesday, August 4.

Due to the significance of these changes, we’re extending the Ranked preseason until August 18 to give us more time to monitor the impact of these updates and make the necessary client changes for TDM.

One of the best things about Gear is the way you play is a reflection of your skill, style and individuality. In some ways, we feel this has been missing in Gears 5; so, next Tuesday, August 4, we’re rolling out the latest Developer’s Playlist. The goal of this playlist is to add more depth to combat by balancing the viability of each individual playstyle (wall bouncing, strafing, roadie strafing, or a mix of all).

To be very clear, these changes are going make Gears 5 harder and more demanding on the player. In fact, we’re sure it will initially be quite jarring to the user but, due to the deeply connected nature of weapons and movement, we felt this wholistic tuning approach is the best way to help the game to evolve.

In short, we’re raising the skill ceiling in a BIG and ambitious test. It will take time to iterate these tunings based on data and your feedback but we believe it will be worth it.

This playlist will be added next Thursday, August 6.

A certain level of bullet magnetism has been one the foundations to making the Gnasher “feel” consistent in every Gears game (and all modern consoles shooters).

While this mechanic gives you a sense of consistency, it can impact your ability to dodge shots, e.g. it reduces the effectiveness of the strafing at close ranges.

In this playlist, we have reduced the Hipfire and ADS values to push the consistency of aim onto the player’s ability to land a shot.

Note: ADS values are different to Hipfire because ADS distance values are measured from the camera as opposed to barrel which is the case when hipfiring. The ADS will feel a lot like the competitive tuning but will still be a viable option at very close range.

We’ve kept some assistance within chunk range to maintain a level of consistency across ADS and Hipfire.

There are some legacy mechanics that have existed in every Gears game since Gears of War 2 which continue to cause a level of inconsistencies with the Gnasher.

The goal is to make the same action achieve the same result so you are always in full control and understand where your shots will land so we have adjusted these mechanics.

At some ranges, bullet magnetism would kick in and cover up the level of randomness. Since we have reduced those values, we need to make the gun itself as consistent as possible so the responsibility can fall more onto you the player.

Based on all the changes above, we know that landing ADS shots will naturally be harder; so we slightly tightened the spread to help players land more pellets on average with well-placed shots.

We are balancing this out by rewarding players that can land high accuracy shots so they will deal more consistent damage at further ranges (Approximately 8m+). 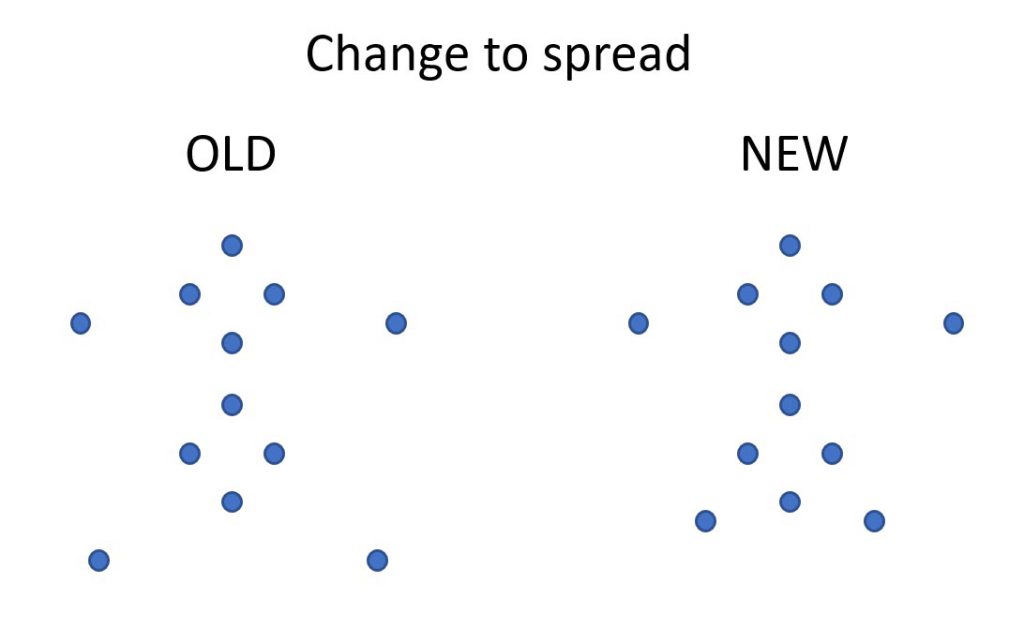 This means any movement action a player does; strafe (walk), bounce or roadie run will keep the spread at a consistent size.

This will increase the number of pellets a user can hit from slightly further ranges but it also increases a player’s ability to dodge stray pellets that may have only landed because of a wider spread. (Previously the range affected would be different depending on the type of movement action the player is doing)

Previously, players that landed a Gnasher shot first were rewarded by disrupting the other player’s aim.

As we’ve made landing shots more skillful, players will now have control throughout the fight. Basically, if you are shot by a Gnasher it will no longer throw your aim off resulting in a genuine Aim vs Aim battle.

Note: Other weapons will still cause camera shake, this change will only affect Gnasher vs Gnasher combat.

We know that weapon balance and movement go hand in hand – it’s what makes tuning Gears so tricky.

With these proposed movement changes, we want to make all movement styles viable in combat.

We believe the slower slide speed correlates with the goals above and other changes listed.

The slower slide speed leads to smoother and more readable movement. With the changes to acceleration (Increased by 50%) and the slide speed being increased from launch heading into Op2 (630 > 650), some players have found it hard to react efficiently to the faster movement.

Remember, the goal is to make all playstyles a viable way to outplay and make your opponent miss more effectively. The slide will always be the fastest movement option in the game, we are trying to find a balance between it being a choice rather than a necessity at the highest level.

We understand that some of you may interpret this as a nerf to wall bouncing but we don’t believe it is. When combined with the other proposed changes, players will need to be more accurate to land shots; so we still believe that wall bouncing is a viable option to close the distance on/out maneuver your opponent.

The intention is to keep the transition from Roadie Running to Slide to Cover Slip to Roadie Run as smooth as possible without the feeling of seeing players quickly accelerating out of a cover slip or players feeling like they hit a wall (if it was completely removed).

This mechanic is key to making navigating the map feel as smooth as possible, but we also want to maintain balanced gameplay within close-range engagements.

By slowing the game down, we feel it’s critical to slightly lower the damage output of the Lancer. We’re also improving the consistency of damage at close ranges to make the gun more intuitive to the user.

The removal of the damage drop off at closer ranges means players can now follow up already established Lancer damage confidently knowing how much damage they will be dealing. 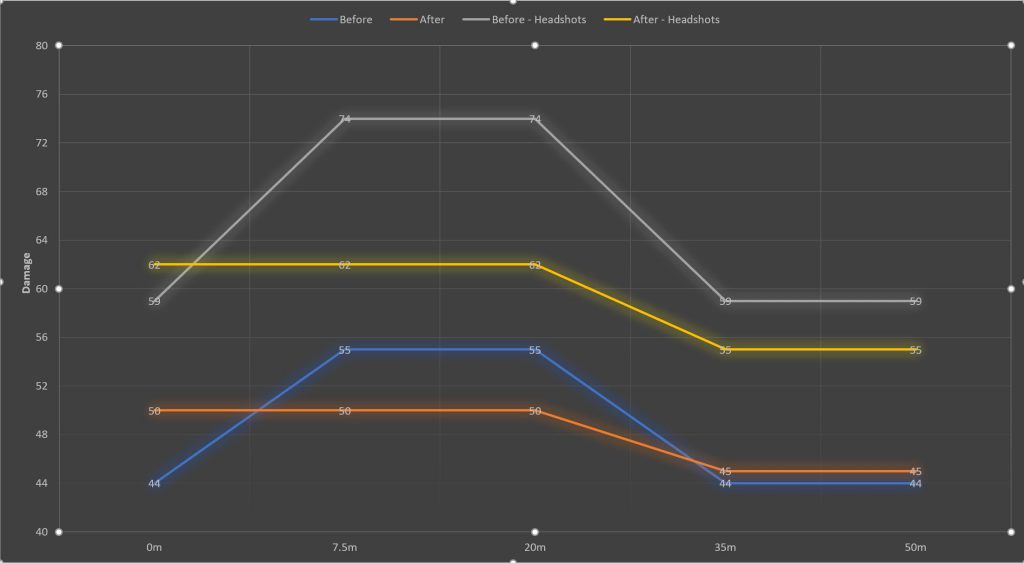 The responsibility should fall on the shooter to stop their opponent regenerating health and we believe this change better correlates with all the changes listed above.

This equalizes the assistance given to players coming out of a slide.

With the reductions in those mechanics (Bullet mag and slide speed) we believe this is a suitable change going forward that will increase consistency within chunk range.

This also benefits all weapons when cancelling out of a slide, but the Gnasher will be affected the most by these changes.

That’s it from us! Make sure to join us today on our Developer Stream where Jonathan Taylor, Lead Gameplay Designer, will join us to talk about the Ranked changes and the developer playlist.

Regarding to Character fixes and bugs.

A lot of these changes are what the community wanted, and whether this is enough, too little or too much is to be seen.

But TC are listening guys, and that’s the important thing.

Lots of cool/good changes in the playlist. Looking forward to trying them out!

Exploring the chunk range should be priority. They need to lower that. Everything else is supplementary. The dev playlist is a great way to experiment these changes. Overall I’m happy with what they’re trying to do here even if I don’t agree with some things, it’ll be great to test.

But the gib range once again… should be TOP priority.

EDIT: making tdm 4v4 is an AWESOME improvement. Bravo. I’ll be checking it out.

I guess we’re back to pretending PvE doesn’t exist.

Monkey paw sh*t of course. TDM is back but 4v4 is questionable. Also making it solo and duo queue is kinda a bummer atm since I’m gonna have to limit certain friends joining me. C’mon.

TDM back is nice, it limited to Solo’s and Duo’s is even better.

Nothing about server kicks?

Nothing about paduks broken medal?

Nothing about card upgrade broken?

Nothing about the final toxic skins?

I’m a fan of everything in this update. Though if eliminations only worth 1 maybe lower the entry cost gold on up? Just spitballing

Slower slide and less magnetism with a consistent spread from gnashers is gonna lead to higher skilled gnashers duels. Looking forward to it

these TDM changes are ridiculous.

basically this is a mode for the people who ■■■■■ about getting beat as a solo players in team based modes.

Monkey paw sh*t of course. TDM is back but 4v4 is questionable. Also making it solo and duo queue is kinda a bummer atm since I’m gonna have to limit certain friends joining me. C’mon.

exactly, this was the mode me and my group played before TDM was axed. this is absolutely pointless, lets limit a 5v5 mode to 4v4 and on top of this limit the game to only playing with 2 friends then put it into Ranked…

wtf is the point of any of this?

ok great, your Masters in a game mode with more Asterisks than my cell phone plan.

One of the best blogs theyve ever put out.
Honestly I’m actually more excited for the devs playlist then I am for actual ranked, those changes look amazing and should make the take play so much better.
Still can’t wait til the nerf the gib range, but looks like that is next at least.

Great, another PVP update. I suppose I’ll see you next week with the information I actually give a sh** about? Or do I have to wait 4 months for that too?

Can you fix the lancer reload bugs? People are starting to call them lancer cancer, because it kills you.

Another step in the right direction. Now lets just hope they can put one foot in front of the other instead of 2 steps back.

Finally something to brace TC for in PVP…TDM will be back?!
Insert terminator meme here*
Nicely done guys!!!