Operation 2: Free For All 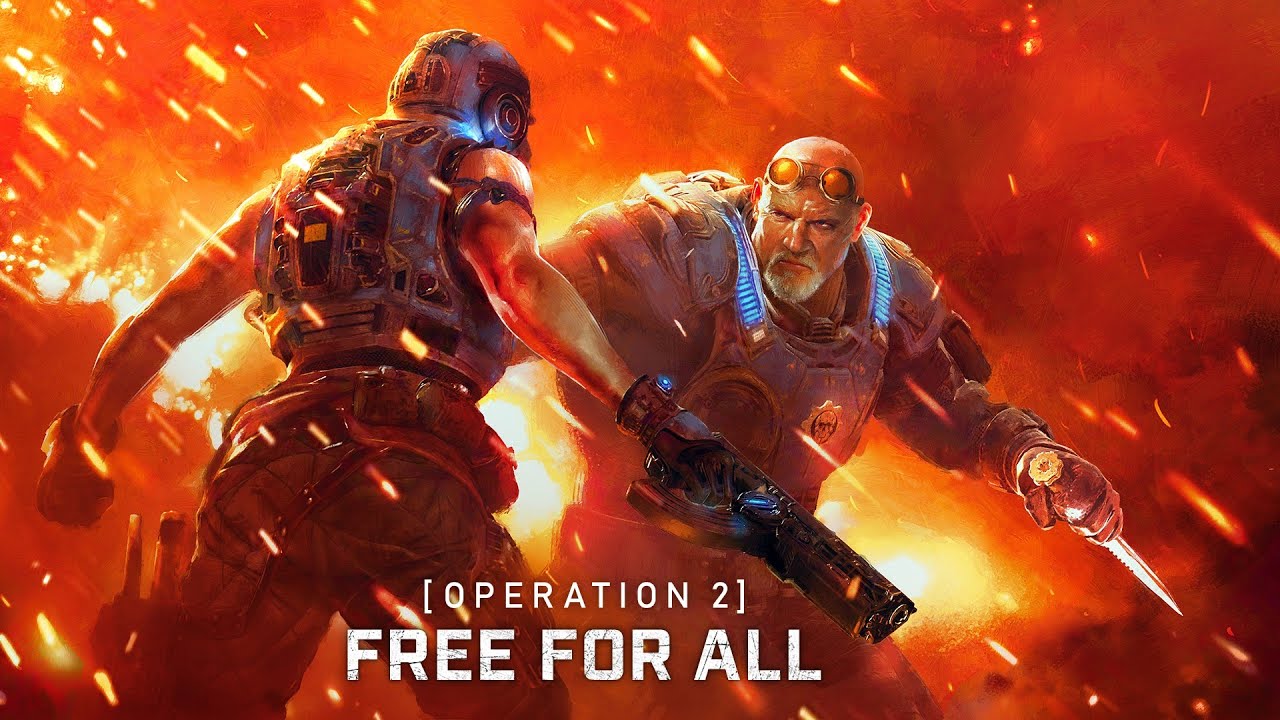 Get your first look at Operation 2: Free For All in action in the trailer above, then read on for all the details. 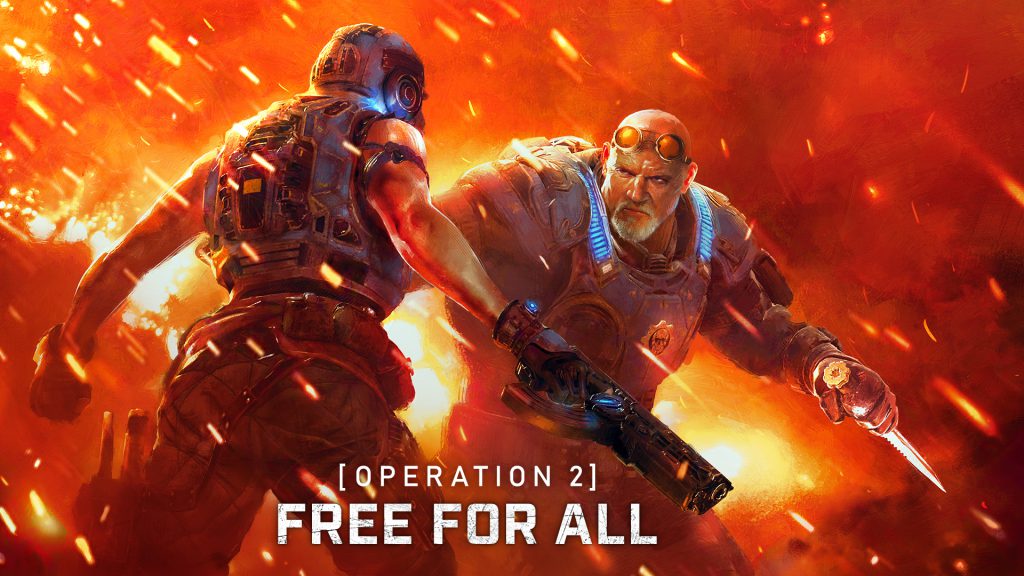 Free For All is back and better than ever as the biggest Versus mode in Gears history. Fourteen players will battle against each other in a holds-barred fight to be the first to 30 kills.

Free For All will initially be launched as a featured playlist with the launch of Operation 2, and will convert to a Ranked mode in early January.

FFA in Gears 5 keeps it simple – core tuning (not Arcade tuning), standard loadouts and quick respawns. To dominate in FFA, you’ll need to master the fundamentals while taking advantage of any weapon pickups on each map. To support fights this big, we’ve created three brand new maps built specifically to support a great FFA experience, each with their own distinct style of gameplay.

This mining excavation frozen in time features huge slides that funnel combat into a dangerous central pit. Venture into the depths of the Pit to be rewarded with the best weapon pickups – if you can survive.

A claustrophobic battle in the heart of a machine with fights that will be defined by bridges separating the two main sections of the map. 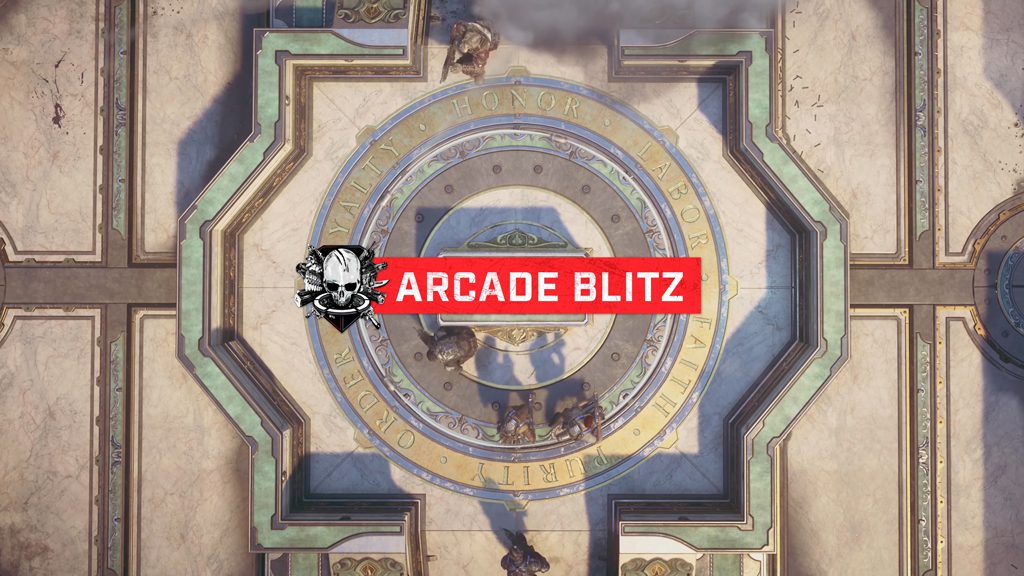 Arcade Blitz is a no holds barred fast paced objective mode, where hills move quickly and points can only be captured by standing within the hill.

This is an Arcade mode, so choose a character whose passive abilities and weapon upgrade trees will help drive your team to victory. Do you take a more survivable Character and focus on capturing rings, or do you play a more defensive Character and keep your opponents away from the hill? The choice is yours.

Arcade Blitz will be available in Custom Lobbies and the Arcade Quickplay playlist alongside Arcade Deathmatch. 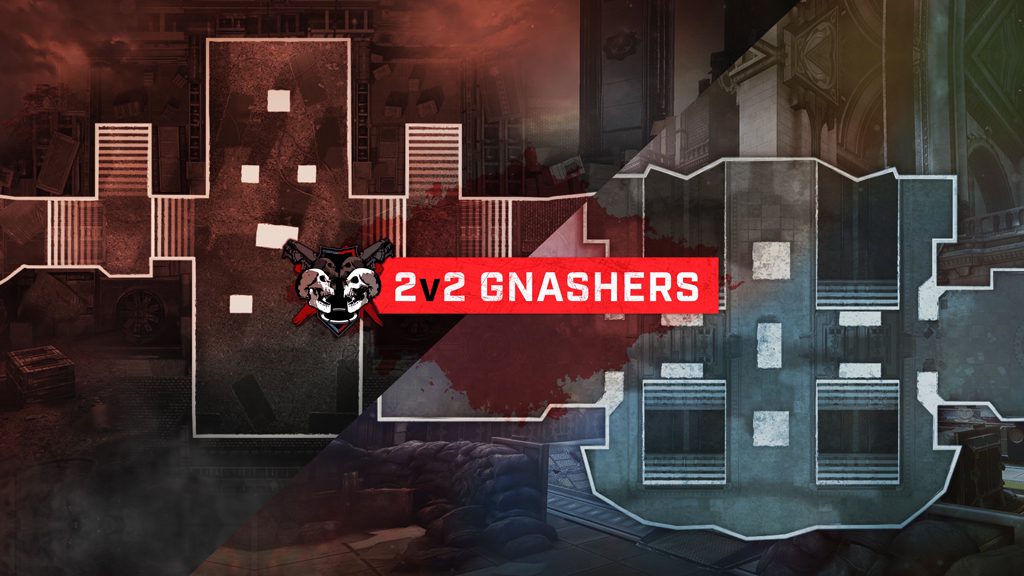 Grab a friend and warm up that Gnasher – 2v2 Gnashers is back in Gears 5!

2v2 Gnashers is all about intense duo duels where hitting shots and covering your teammate is all that matters. To serve these deadly duels, two maps will be returning for 2v2 Gnashers.

The OG showdown in the middle of War Machine. Positioning is everything to come out on top of this intense fight.

Fights in Foundation Mid leave you nowhere to hide – risk going wide in Closed or fight pillar to pillar in Open.

2v2 Gnashers will be a ranked playlist with competitive tuning. One more thing, more maps are coming in future Operations. 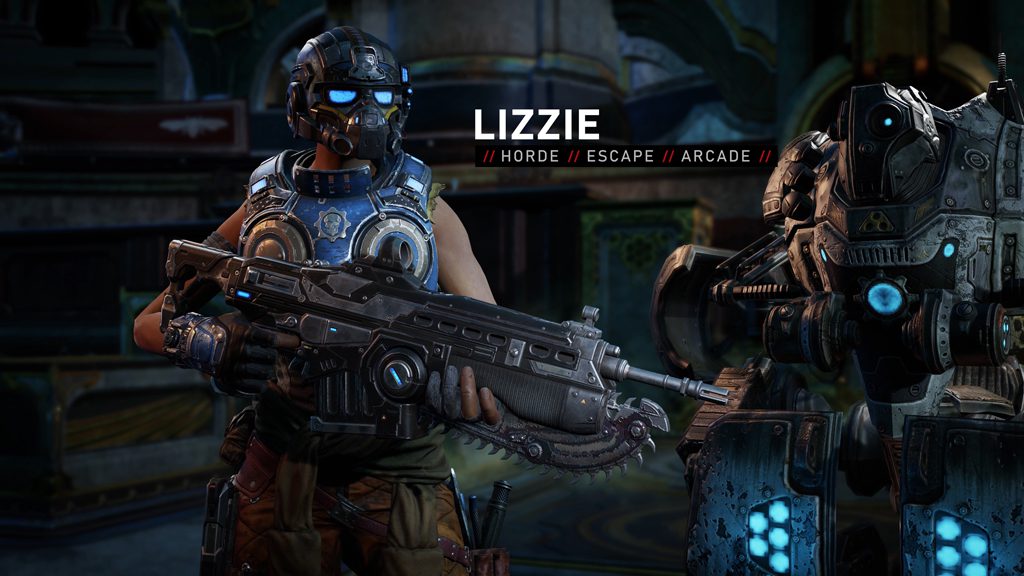 A driver for the COG and member of the iconic Carmine military family, Lizzie is a total badass that never backs down from a fight. In Horde and Escape, she can summon a Silverback with her Ultimate to wreak havoc on the battlefield.

Use her Skill Cards to customize the Silverback with different weaponry to create your own recipe for Swarm destruction and to maximize her on-foot potential to draw aggro. 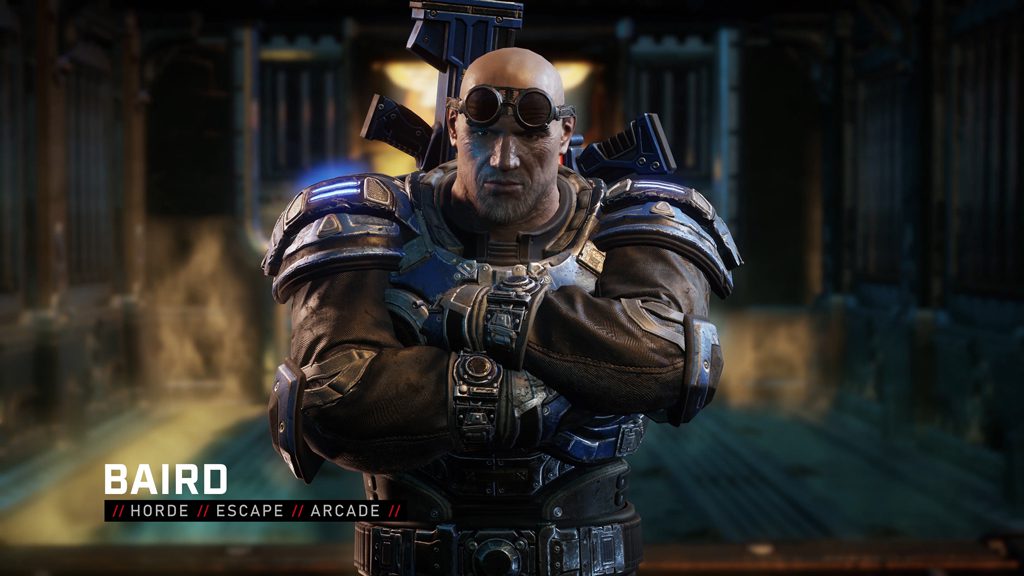 Use his Skill Cards to buff and get bonuses from using precision weaponry or specialize in boosted fortifications like the Weapons Locker Overclock or higher damage MG Sentries. 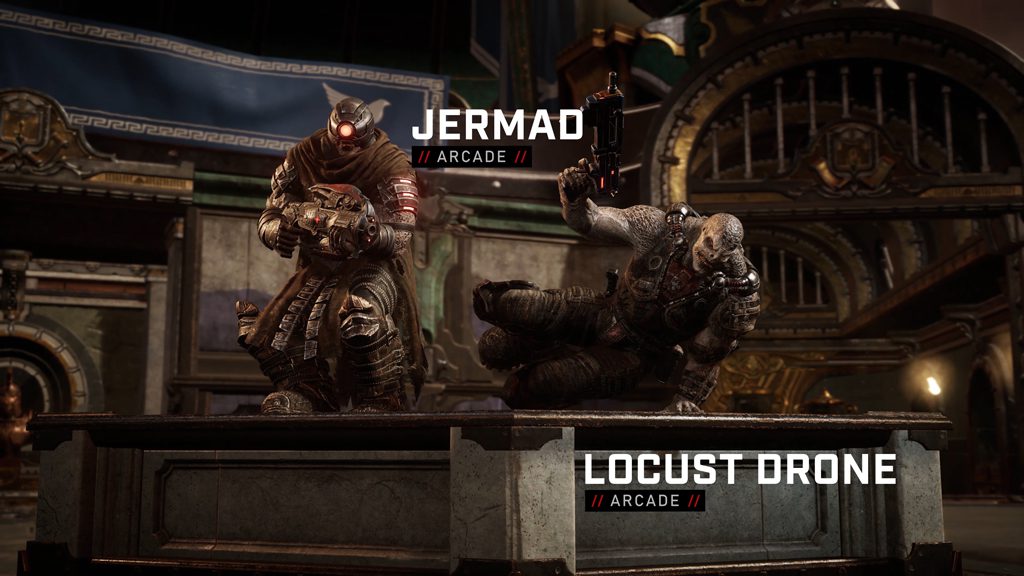 This Locust sniper hails from the ranks of RAAM’s vicious Bloodied Vanguard where he played a key role in the defeat of Sraak.

As a capable survivor, Jermad has reduced headshot damage, making him a significant threat to Heroes using precision weaponry.

The iconic Locust Drone emerges once more into the fight! With a highly adaptable nature, the Locust Drone has recoil mastery over DeeBee weaponry (Baird mirror).

Coming in early 2020, the iconic Kantus will be added to the ranks of the Swarm.

Beginning with Operation 2, Mac, Keegan and Lahni will be playable in Horde (all Levels and Skill Card you’ve earned in Escape will apply in Horde). In addition, each character will have perks based on their playstyle just like every other Horde character.

In response to player feedback, Fahz is receiving a significant buff as part of Operation 2 and we’ve added three new Skill Cards to Kat to increase her viability in Escape.

And finally, an old veteran becomes a new Hivebuster as Marcus makes the jump to become playable in Escape! How will you use Living Legend to best your time on old and new Hives?

In addition to the 5 new maps for FFA and 2v2, two new Arena maps will also be added for both Public and Private Play with the launch of Operation 2! 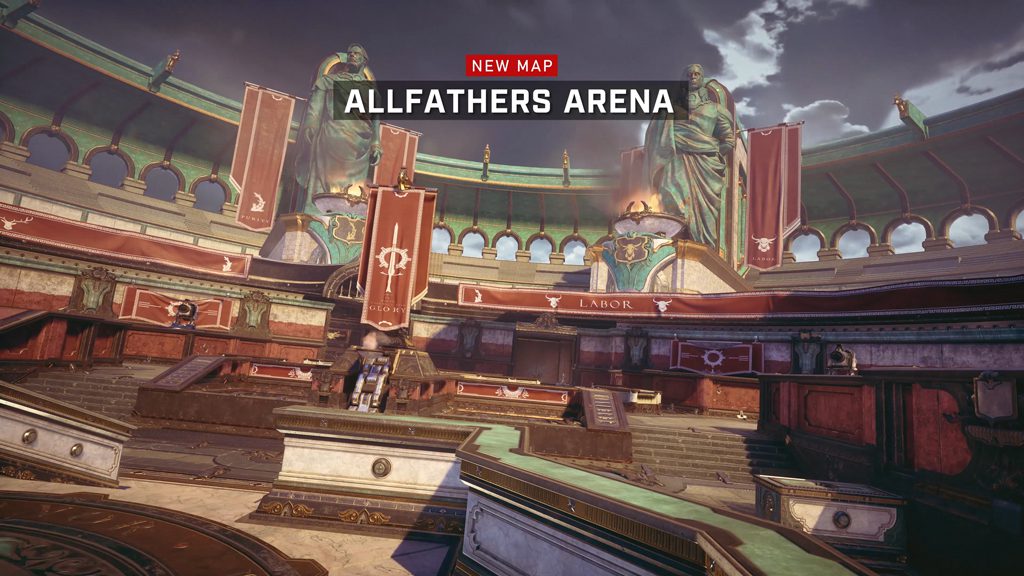 Set in an old coliseum dedicated to the founding members of the COG, Allfathers Arena is now destined to once again be filled with the sound of battle!

Available in Horde and Versus, this unique arena is home to an exciting, never-before seen feature in a Gears map. The middle of the map showcases three dynamic areas – the Room, the Field and the Hall. Each area has three different cover configurations, resulting in a total of 27 possible map layouts, each a new way to fight. Be prepared to learn fast if you want to survive the Arena.

In Title Update 4, Allfathers Arena will also allow players to choose the combination of zones they want to play in Private Match.

Lift is returning Gears 5, with improved lighting and texture quality, as well as a few new changes. The best of Lift and Lift Apex have been combined to make the perfect version of the map. The most notable improvements include the popular “Top Rocks” area’s return to the battlefield and changes to the control room shutters, which now start closed and can be freely controlled by players.

Here’s a list of all the improvements coming to Lift when it arrives in Operation 2:

Operation 2 continues your Hivebusting adventures with 6 brand new Hives still to come over the duration of the Operation!

In addition to the new Hives, we’ve also introduced 27 new tiles that give you more ways to experience – and build – Escape Hives. These new tiles for the Ventilation and Mining tile families place an increased focus on vertical tiles, from winding staircases to huge cavernous slides, and new ways to control player behavior like the timed bridge.

The Tour of Duty in Operation 2: Free For All features more than 200 exclusive earnable items that can be unlocked through completing daily Objectives and season long Medals. These items include character skins, weapon skins, Iron, expressions, executions and more.

This Tour of Duty brings more high-quality content to the Tour throughout the experience from the word go, like unlocking Collector’s Winter Marcus at Rank 1 and Onyx Guard at Rank 10.

MORE WAYS TO PLAY YOUR WAY

In response to community feedback, we have also excluded Character Skins from any of the mode specific Medal Group Rewards and placed them in the main Tour of Duty level rewards instead.

All boosted players will earn Double Stars throughout the Operation regardless of when you play. Moving up the ranks just got a lot easier!

We have broadened our range of available Tour Objectives, and sunset others, to provide a more varied experience of Tour Objectives that can appear each Tour.

Stay tuned for full Operation 2 / Title Update 3 notes in next week’s What’s Up including a detailed look at Tour of Duty and the Totems Challenges for the new Characters.

OPERATION 2: FREE FOR ALL BUNDLE

The Operation 2: Free For All bundle includes all four new characters, the complete Eclipse weapon set, 1000 Iron and 30 days of Boost, all for $19.99. All Heroes and Villains can be individually earned by playing or purchased via the in-game store for 500 Iron each.

I need Baird in my life

Wait a minute…You have to pay to get Operation 2?

This is how you respond. Great update!

EDIT: Looks like the FFA maps are mode specific which is disappointing, hopefully that is not the case but doesn’t look likely.

It seems more like a bundle to basically get weapon skins, some Iron, Boost and the characters for it while there are other options available for those who aren’t paying.

Hold that horse for a minute, pal. Three of the maps are FFA only, and two of them are useless(to me) 2v2 Gnasher maps(urgh). Only two of them are for Horde and actual Versus, unless I’m mistaken and we have the FFA maps available for those modes too, which would actually be good, instead of a rework of one of the hardest Gears 4 Horde maps, and… something new that I yet have to judge with what they call Allfathers Garden(sounds familiar to some old Gears map but I don’t know which).

Either way, it’s kind of a good deal. Might bring me back to play some Gears now

wow…really good attempt… lots of responses to the players… guess they were waiting for a big overhaul…with the added players to horde and escape it seems more attractive too…i have a good feeling and ill be off work starting next week until Jan, so beers and gears it is!!

One question: what is : “pending certification” for the launch date of 12/11

It does look to be a fairly good deal… but I’m not feeling much excitement if all we really get are two maps for Horde and Versus(I’m excluding FFA and 2v2 maps if FFA maps only are exclusive to the mode, which I quite honestly would find really stupid unless the layout of them convinces me they would not be suitable for the other modes). And the fact that for some reason we have no details on what the actual skill cards for Lizzie and Baird are, besides their number.

Not bad, I’m 50/50 on this. Only two legit versus maps though and one of them is Lift lmao. Now I’m curious how the ToD rewards will look like.

Kudos on the 2v2 mode though TC.

We do got our main man silverback as a Horde ability which is pretty rad tbh.

Edit:I got likes for pointing out the obvious thanks lads.

Do I see Griffin in your future ???

So are the five FFA maps available in VS too?

As in see all rewards or see how it works out?
I mean I put the video in 0.25 speed and looked at everything they even have a picture when it shows quite a bit of items on screen

Yooooooooo if so, I will come back to Gears for sure!!!

This all looks good EXCEPT…

The maps. Allfather’s Arena is cool, at least it’s many variations should be interesting but 3 FFA exclusive maps (made from Escape tiles it looks like) is not exactly exciting. Also they’re re-releasing Lift so I’m rioting.

But the characters look good, Tour of Duty looks less filler, 14 player FFA should be fun, that bundle is actually decently priced considering how much each of the items included cost individually, and now boost awards double stars at all times instead of just weekends so you can probably complete the TOD in no time.

Didn’t see the video tbh, just read the post. Imma have to go watch it now.

5? It says they made three for FFA