What are some good, non-traditional Horde base locations on various maps?

Obviously you should pickup & drop (well, melee/roll-cancel, why do so few people know it’s so much faster?) the fabricator to find the initial tap location(s)/sequence you’re given and therefore the best place to set up shop for maximum possible success. But let’s say for non-noob reasons you aren’t going to set up in the common locations the community has identified. (And you’re with a stack of friends/have labeled your lobby so randoms aren’t surprised you’re going somewhere strange.)

For example, on Rail Line dragging somewhere toward the upper part of the Grind Hall/drill tile (or even the lowered side and the corner elevator). Does it work?

What are some good but rare locations you’ve done and why did they go well?

Is it because you go engineer-less so “base” is already less meaningful? Was it explicitly for the extra challenge, or was it not that much harder, you just need discipline/particular strategies & classes? Do you need to luck out with tap spawns or were you still able to protect taps reasonably (or did you just forge, or simply go without)?

People disagree with me on this but staying at the top of Turbine is the best spot to setup. I dont play Turbine though bc the only boss you can get is a Matriarch.

Its a preference, both work very well together. I like building at the bottom of Tomb but this results in an empty lobby.

Depends on taps. Both spots on tomb are good.

Yeah, I find that the lower ground works perfectly okay and have done plenty of successful runs from there. The funny thing is, even when playing from the high ground I find not that many players actually use it anyway. Even snipers tend to just hang out on the left or right sides. I presume because even though you have a good view for sniping, it becomes the focal point for enemies to shoot at and on master the enemy has more accuracy, so alot of players just find it too difficult to snipe as they take constant damage.

It goes without saying that completing Horde isn’t really how well you place the Fabricator but how well the team plays. These are just some of the “weird” locations I’ve had success in with groups in the past 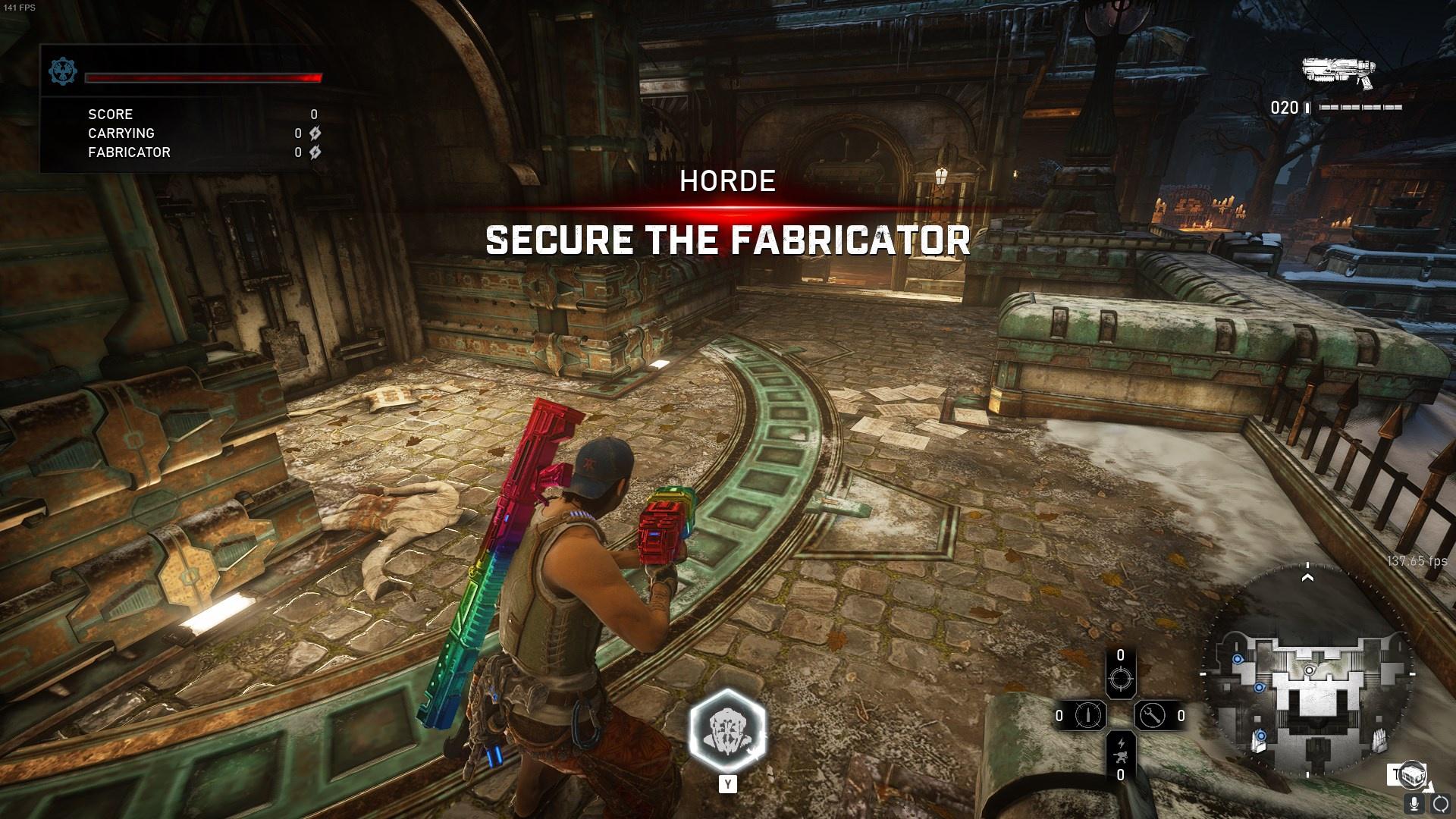 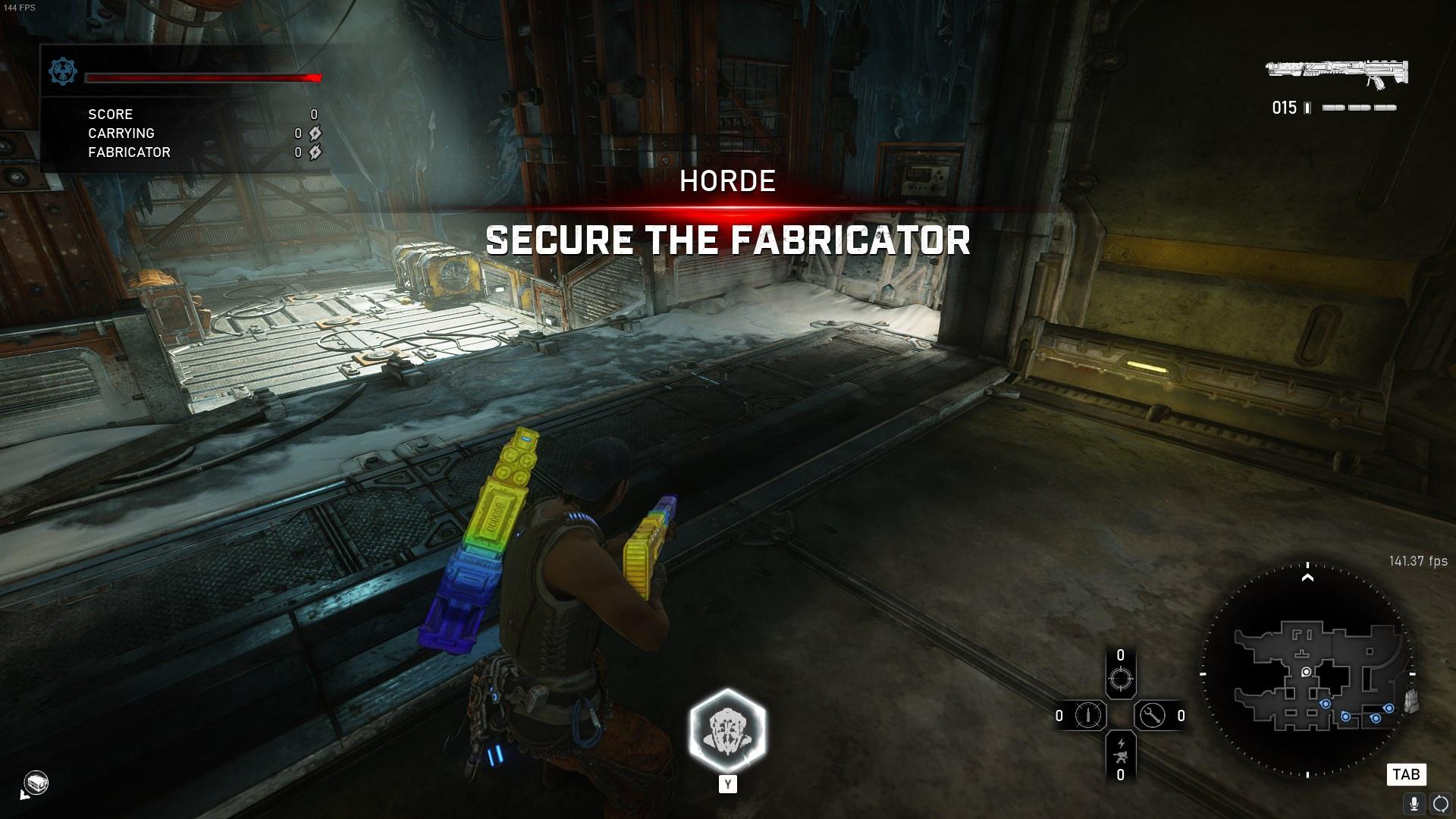 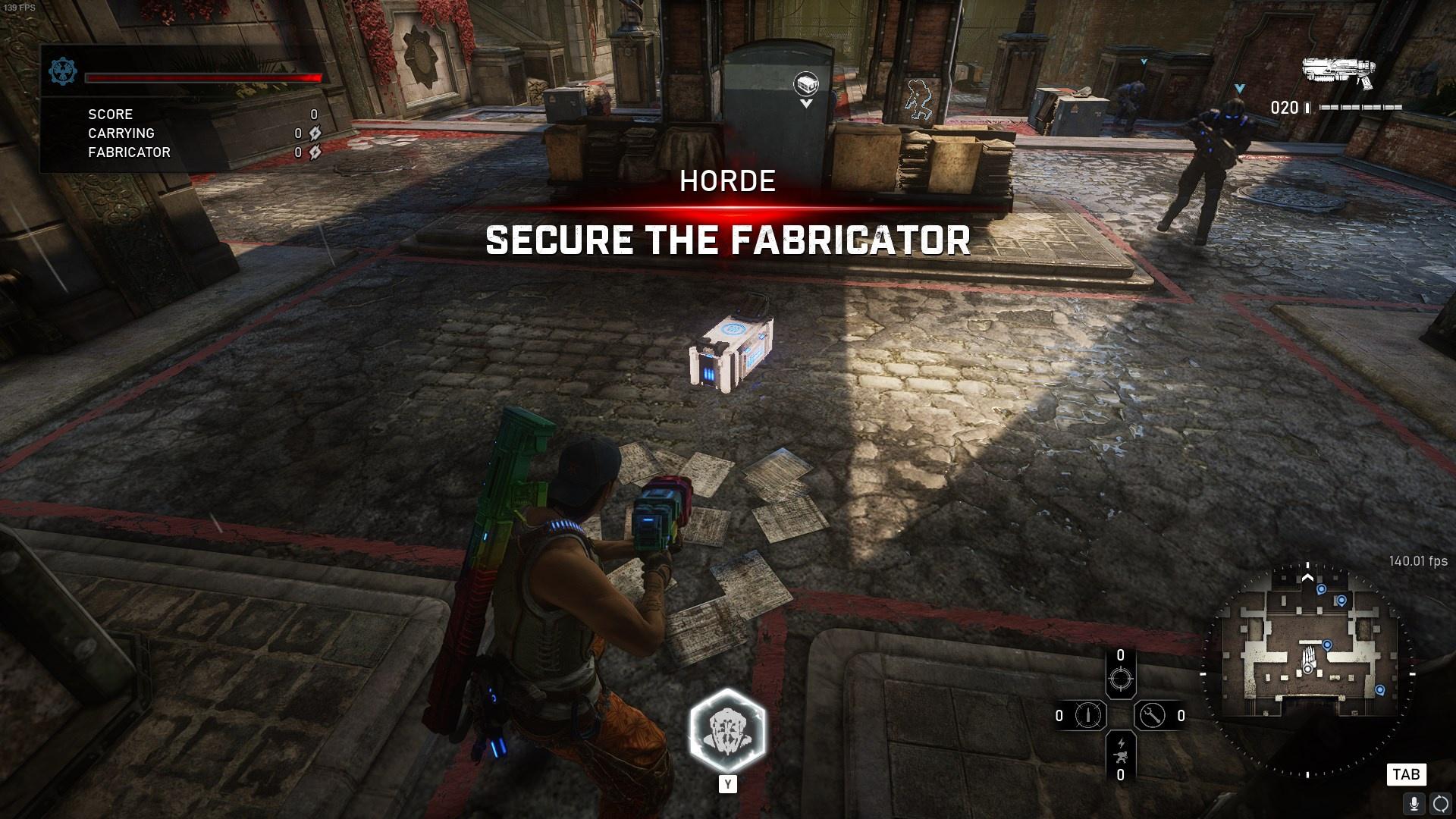 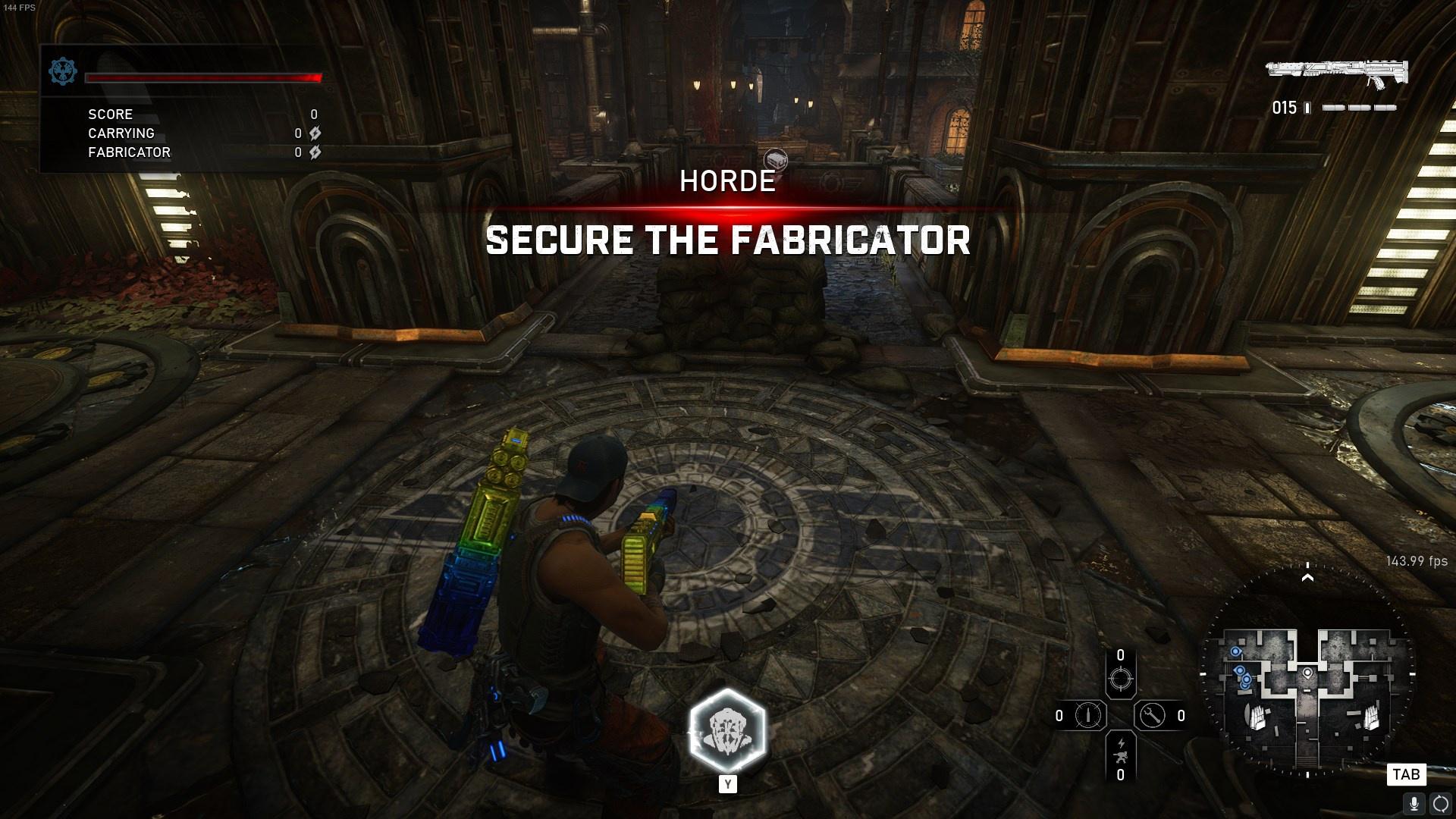 I could post more but I don’t wanna spam the thread.

I presume because even though you have a good view for sniping, it becomes the focal point for enemies to shoot at and on master the enemy has more accuracy, so alot of players just find it too difficult to snipe as they take constant damage.

This is exactly why most people don’t use the middle. I haven’t used Marksman on Tomb in a long time but when I did If there were already 2 on left, 2 on right I’d sit in the middle and pop my head out building for ultimate and just x-raying from there. You surprising have more success with xray from the sides aswell.

You surprising have more success with xray from the sides asw

To be honest, this doesn’t surprise me at all. With X-Ray line-of-sight becomes irrelevant.

Also with sniping, it’s easier to do this when you’re more or less on the same plain of ground as the enemy as you basically just have to scan your reticle left and right. If you’re on higher (or lower ground) you need to factor in ups and downs too.

Not a good one, on todays daily they set up in the middle room. Failed on wave 7, every teammate was useless and would wait to engage the scions until they were inside the base. I was jack and had 4 less kills than the tact host.
@Bleeding_Pepper i assume you would have this host blocked as there an absolute potato. Lobby says jack/engy 5k depo for locker…

To be fair, I wouldn’t have joined such a lobby. Utter filth.

I assume bottom of Tomb doesn’t refer to building underneath the overlook (don’t think I’ve played from there). But what the bottom of the overhead map calls “Entrance” is definitely doable. However, it is noticeably harder.

A key difference between high and low ground is that you’re safe from enemies outside the base when you’re behind cover on the “Memorial” balcony (same thing goes for Koty’s mention of Turbine’s raised location). Enemies have more clear shots down into the Tomb “Entrance” sunken area, and the only cover there is a simple Boomshot splash away from not being cover at all. I think you have to push enemies out and definitely do the generic “control half the map with barriers” strat.

I was similarly trying to reliably solve setting up in a Lift spawn. There’s barely any usable cover, and absolutely zero overhead. Where do you fall back while you’re trying to clear out fliers? It’s worse than how even “safe”/traditional Harbor spawn runs can end-- plenty of room to dodge back there, but nowhere to actually regen/sit out a volley if people are down and everything focuses on you. I’ve found the center of Canals that SH00BiE D00 showed works in part because it’s got help from good air cover/poor sightlines for fliers.

The issue I find with alot of players, is that they all seem to like sitting back on the back low wall directly in front of where you spawn.

The issue I have with this location is that it invites far too much pressure and as you say, there is no cover behind you so it’s easy to get overwhelmed. There’s the Shock Grenade spawn position (on the raised platform) which gives you a good vantage point; as well as the control room/building which teams can easier take control of so you can easily absorb about 1/3 of the map into your base perimeter. Sure the team is spread out, but as with any map, it’s better than being bunched up where a single explosive can kill/down multiple players in one go.

But this isn’t just a Harbor issue. It can apply to lots of maps and players (not just engineers) need to use their heads more when expanding their base and choosing their positions.

I assume bottom of Tomb doesn’t refer to building underneath the overlook (don’t think I’ve played from there). But what the bottom of the overhead map calls “Entrance” is definitely doable. However, it is noticeably harder.

I never found the opposite side of the map (Boomshot spawn) to be that much harder. The main thing is that early on when you don’t have your barriers established yet, you have to cover more approaches so I guess if players have poor spatial awareness they can get flanked (especially with flusher enemies climbing over some of the low walls). But once barriers are in place it’s easy enough to cover.

If you want to get into fab locations and base builds hit up a.i soldier, the undisputed frenzy king. He’s showed me countless crazy builds and craxy methods .

Also if you want to ever check spawns just fire up an escape from kadar wave 7, turn off suvivor and go as jack, then move fab and stealth around to see spawns, then die, move again, check again.

The most interesting wsy i’ve played is when we do mostly forts-less games and treat it like escape.

Except we put the fab in a normal location near the taps and post up on the complete other side of the map. As long as nobody is on the fab/ta side when the wave starts the enemies will ignore the taps and fab and it works pretty good.

Another cool thing to remember in a normal match is that the fab doesnt have to be static, you can move it it trap the matriach, it works super well in escape from kadar. We used it our impossible 2 man kadar on forge as marskmen/robotics.

I have tried so many time this spot on Atrium as engie, you can hold easily 3/4 taps, but most of the time they kick me or want play in boring room. Yeah “i can host”… but my ping/internet is not good to host a match.

I Can’t remember the last time I played Atrium on the balcony side lol. The map is completely ruined by people who don’t know how to play Horde even though they have those strong relic weapons and free lockers. Its the new Overload.

Last time I played Atrium was about 2 months ago on my secondary account as I wanted to clear all maps on master, and Atrium was the absolute very last map. I genuinely left it until last because it’s so horrible.

And afterwards, I genuinely had a migraine. Had to take paracetamol, a cup of tea, and a lie-down after.

Blood Drive is my favorite map.

Here are a few non-tradinonal setups that i prefer over the regular choice of setups, Reclaimed - Manor, Lift - Deck (HIGHLY RECOMMEND), Pahanu - Cave

And some more options that i like to switch things up: Bunker - Bunker, District - Cinema, Harbor - Stern