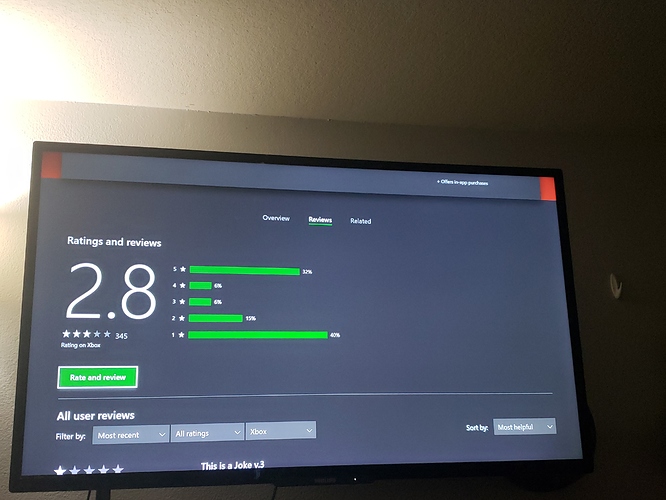 Moving back to gears 4 for a while. Hopefully till gears 6.

And even then, most of the 5* are fishy, who knows which score the game would have without those reviews.

Give it time and every rating site will be like rotten tomatoes or epic. Every thread that doesn’t say the game is amazing is flagged as offensive and deleted. Thereby only leaving the reviews that say the “thing” is good.

This game should be called gears 5 (kitty pool editon).

I think it’s more that they’re trying to combat the growing trend of review bombing. 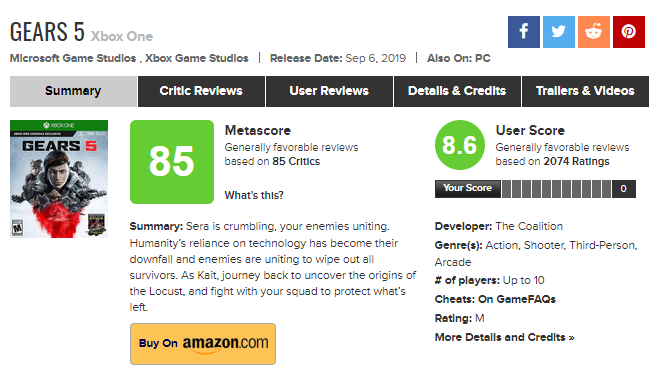 That’s not Gears 5. It’s gotta be a different game.

It’s the rating for the PC version

Doesn’t say Gears 5 anywhere on picture. That’s why I’d take it with a grain of salt. 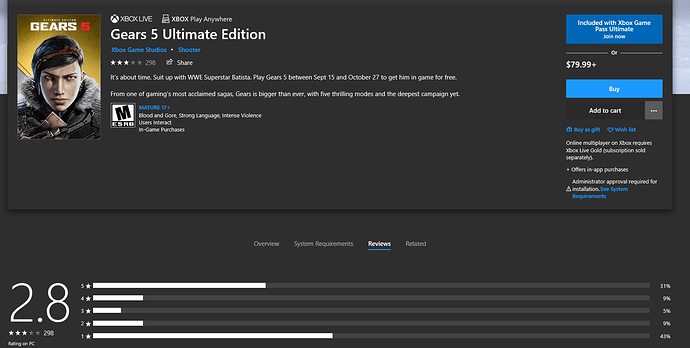 Game is trash, what more can we say

I urge everyone to give it its deserved rating.

Thanks for the reminder! I gave it a 5.

I gave it one star because I couldnt gave it zero and microsoft erased my review from the official page, Bad corporate practice I would say .

The game didn’t work and its objective also didnt accomplish, that why Gears 4 multiplayer once again its full now, and even Gears 3.

Gamers need to stop taking such polarized stances on everything. A game is allowed to be good with faults or bad with potential.

Gears 5 has a surprisingly great campaign. Escape is a very cool idea and a strong alternative to Horde. Horde is debatable; I personally don’t like the changes but others clearly do. The multiplayer is currently suffering for a litany of reasons.

So if you only play it for multiplayer, yeah, this launch hasn’t been great and, when compared to past games that already had years of support and new content, it doesn’t compare well. But calling the game trash and throwing one-star reviews at it isn’t constructive criticism. It’s easy to dismiss as people whining like children.

This entire trend of “review bombing” is killing the very concept of reviews and diminishing their effect. Every AAA game gets review bombed somewhere for some reason. It doesn’t even phase me anymore when I see it.

If the game was good I would never give it a one star review… unfortunately the game falls into the latter.

It would be a bad review if I lie to people who would like to buy it and tell them that its a good game when its not. I think its important for potential players to know that the game doesnt deliver and by having that information they would choose.

Just imagine I would rate one star Chess when I truly know its a incredible and deep game.