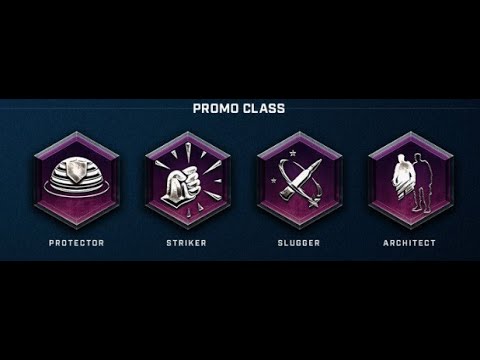 With unique I mean one of each, no duplicates. Therefore also only 4 players.

Interesting waves are probably the first 10 (Deebees + Kestrel), 35 (Sentinels with Deebees), 40 (Kestrel) and wave 50 (Matriarch) if you don’t want to watch the whole 50.

Unfortunately no Swarmak, that would’ve been our downfall anyways I guess.

The key when doing such a run is to focus-fire with your entire team towards one spot, hence why we picked Clocktower (and also that we have a chance to get all boss-types). We had runs where Sentinels wiped us on wave 45 or a Kestrel wiped us within 3 seconds on wave 40. Not this time.

Whole team in one spot focusing fire ? That sounds like old school insane horde, a play style sorely missed these days with heroes running about the map.
Well done guys

1-50 on Clocktower with Slugger? Pfft.

Slugger is basically a demolitions but without the Ult, the protector is the boss killer, architect the engi and Striker helps with bosses too but nothing too crazy.

It may sound crazy but nothing too surprising. Promos aren’ t trash, they are good if you know how to use them.

I am not sure why you felt the need that for the snarky response,

I am always happy to see people do things with horde and escape outside the usual meta, and Commander is a great player so I am not shocked/surprised when he does well with anything PvE related

Well, 4 players challenge isn’t like you said nothing surprising, but I don’t get why you don’t appreciate when players have those challenges at all.

My point was that promos are underrated. Now if you wanna call that “snarky” or whatever fine.

@Imstifu oh I do, slugger for life

Slugger is basically a demolitions but without the Ult, the protector is the boss killer, architect the engi and Striker helps with bosses too but nothing too crazy.

While I do agree to those points to some extend, none of the classes is especially strong against flyers. You really have to keep an eye out on those when they spawn because they can wipe you in seconds (which happened to us twice).
Yes, Protector and Striker apply bleed to the bosses but once they’re near the base, it can get nasty very quickly. They still have a massive amount of health and especially a Matriarch leaves your base vulnerable. Take a look at the waves I recommended above, you’ll see what I mean. There’s way more possibilities that you can wipe in a few seconds if you’re not paying attention. Don’t forget that those classes have nowhere near a viable survivability rate like the others (damage resistance or increased health is lacking).

This was also just a showcase to basically prove, that those classes aren’t as trashy as people may describe them to be. They have their moments.

Slugger can stagger enemies if it gets too hot and seriously wipe stacked enemies with frags for a cheap cost.
Architect can seriously prevent a wipe once the enemies are inside with the Hologram (see wave 35).
Protector can be a life savior with its shield and the capability to quickly melee bleed out enemies inside the base (also showcased in wave 35).
And Striker can one-shot Drones and Imagos with Longshots even with double-health due to “First Strike” applying to anything, not only melee. And of course applying some bleed with maces against bosses.

And Striker can one-shot Drones and Imagos with Longshots even with double-health due to “First Strike” applying to anything, not only melee. And of course applying some bleed with maces against bosses.

I’ve heard this before briefly, care to elaborate? Maybe I have a new favorite class idk.

While I do agree to those points to some extend, none of the classes is especially strong against flyers.

Because in GOW its so uncommon to face enemies that aren’t on the ground they pretty much are the apex predators of GOW.

Anyways man hope you had a fun run there, as that was the point at the end

This was also just a showcase to basically prove, that those classes aren’t as trashy as people may describe them to be. They have their moments.

People be sleeping on some of the ‘meta’ with GOW5, Slugger throws freakin nukes and most people think its a bad class for some reason.

It says “Melee damage to healthy enemies increased by XX%” while it really just means “Damage to enemies with 100% health increased by XX%”. So a Longshot that does 7500 damage will then do 10125 damage which is just enough to one-shot them (afaik Drones have like 9k health and Imagos 7k or so with the double health mod, with 2.5 it’s just not enough to take down the Drones with one shot, Imagos are still one-shot).

Yes, Promos are underrated towards majority of players including me that I don’t find a meaning to Level Up those Promos until now.

However, I start to play Promos and Level Up those Class now (I am Re-Up 50). I think an Experienced Player can use Their Potential,

Surely this is a reflection of your team’s skill rather than any reflection of these classes being much good? Saying that these promo classes aren’t that trash is a bit like saying that a broken clock gets the time right twice per day. I still stand by the view that the promos are bad purely because their skills are poor compared to the main line classes. It’s a class system afterall. What you’ve achieved is inspite of the classes being bad. Your teams overall ability and knowledge of the core mechanics has compensated for the deficiencies of these classes (in my opinion). It’s very impressive, but I’m not at all convinced it proves these classes are useful in a wider sense. Only top tier teams will be able to replicate something like this.

Never said their in-line with the others, just saying they aren’t completely garbage and have their moments where they can shine.

Great run, guys!
Imho it proves that it all comes down to players’ skills.

I’ve seen plenty of Tacts or Demos or Marsksmen who clearly lacked the skills. Didn’t matter if theses classes are meta, if players don’t know what they are doing they will fail.

I think you’re exaggerating a bit, in the late Game it takes a ton of those “Nukes” to kill one big Enemy.

None the less Slugger does deal a fair amount of Damage, but at the same time is the most Braindead Class i’ve ever seen all you do is: Go to the Fab buy Grenades and spam them and repeat.

Even if you ignore the damage potential of Slugger, 9 (maybe its 8?) super shock nades is pretty damn good at holding off large groups of enemies.

Nevermind you can have more capacity for heavy weapons as well, which is pretty dang useful.

They have an Ult that can be pretty clutch in right circumstances.

Now are they on the same level as Demo? No. Their Ult is by far inferior, and they aren’t as versatile so on larger maps they struggle, but they have far higher damage potential then most classes (I’d put them in top 5 maybe)

I’d put them in top 5 maybe

I don’t think you would when you think about it a bit more.
Fortunately they aren’t dependent on perks, so are handy for donations!

Very nice job. All skill. And to think, most randoms can’t even complete a game with 3 tacts and a demo. Its like their brains can’t function anymore when a flying enemy shows up.

Anyway while yes the promo classes are ok ish lol and judging by some your prefermances in other videos this was more the skill of the player than it was the class itself. I have no problem with promo classes per say but im not allowing someone in who is just going to throw grenades or go down every time they try to melee.

Ill eventually get to leveling mine out but for now ill leave them on the side line until I need a change up lol.

Putting all that aside this is something the vast majority of the community should at least be attempting. Its great to challenge yourself and experiement but I still think TC kinda needs to up their base challenge for players like yourself lol.

One can look at it as how “bad” those classes perform compared to others or how good they can be when used correctly. Therefore no nerf or buff mentioned this time.

To be fair though, they need a buff (or fix at least). Although that would nerf and buff Striker to some extend…