I’ve spent quite some time messing around with the editor and created twenty operations (Custom Escape Maps) for those who are interested. All maps was tested by my gamer girlfriend on beginner difficulty and she never played the game before. So, play with your friends and let me know what you think. Play smart. Most importantly, don’t die.

Part 20! "The Last Hive (I tried updating it to “Operation Last Hive” but it hasn’t changed yet) XFFMSD

For some reason it wont let me update the map descriptions too. I don’t know if its late response upon updating a already published map or if its gonna be like that permanently. Also I strongly recommend the developer’s to add ingame “custom escape mode” currency or add enough already ingame currency that it isn’t exploitable and yet somehow motivate people to play community made maps. Regardless I enjoy every minute of the game. ^,^ Have yourselves a great day!

This is awesome. Which one would you say is the hardest?

Also not too sure how map sharing works but we might need the codes for the map to look them up.

dude, these must of taken ages.

The last one is the hardest. I’ve done my best to scale the difficulty from one to twenty, increasing the challenge the further you go and enough enemies for three players.

Glad to see someone used the map creator to its fullest. I remember TC gave us a chance at being featured by making a “scary” hive back during the first halloween event.

They never ended up doing anything with that contest…at all and its disappointing because user created content can be very good when done right.

Nice to see you enjoyed your time playing creator

I certainly hope they add extra content down the road, maybe a new enemy type you can’t get anywhere else except in custom escape mode like bringing back the lambents for example.

I’ve been away from the forums for awhile so its good to see the community is still active.

Nice! I’ll make sure to play a few

Holy smokes dude! that is some serious work you did there.

Will give it a go if I manage to get the gang together.

If only TC put some work towards custom content, G5’s story would’ve been different.

Thanks for the effort, I will find some frds to test out all of the hives.

I have tried the first 4 parts (Master only), which the difficulty is significantly increased generally, so it’s my pleasure to finish this mission

But, it’s somehow being generous in certain act while certain acts are really lacking the resources.

Thank you for trying out my maps Imstifu. That is crazy you played it on master lol. Way to flex on them baddies.

Played Operation Dark Side on Master with Blademaster. Not a bad map. I enjoyed it and the whole time I felt I had a false sense of security lol.

I’ll try the rest out at a later time, but from that one it’s off to a good start

Part 10 is much easy than part 9…a begineer hive

Part 9 is easy having 3 nomad

Part 8 is surprisingly quite average that it doesn’t have much elite drones.

My team feel the pressure in part 7 getting wiped in the first act very much.

Part 6 is fine that you don’t have any scions.

Part 1~5 are for beginners.

I had done 1-6. The first 5 maps were enjoyable and somewhat easy, but some of the ending spawns didn’t make sense because either there was no spawner, or the spawner was too far away from outside. The ammo boxes on helipad don’t make sense either.

On the 6th one, White Fire, at the beginning where there’s the massive room (from Turbine / Hivebuster Act 2), if your intention was to make it really hard to push forwards and to make someone rage quit, you did a really good job. I remember that scenery before in another hive, and it’s proper hard to push with that setup. I was going to suggest rushing, but everyone had left at that point.

What’s the code for Part 15? There was no search result found.

So I ran into a random custom lobby in Escape and the name of the hive was Operation: Diamonds. Is this one of yours? Because it is not in your list there also if it is then you sir are a monster because I got rinsed over and over again on that one lol. Enjoyed it though lol.

Did you finish it? It would say the creator’s name “Masive Gore” at the end if created by them.

No, I rage-quit lol. Got absolutely wrecked in the second act. I’ll do an aul search and see if it is the same creator.

EDIT: It’s a different player. Never occurred to me to just the search for the map lol.

@Masive_Gore Thanks for your effort

And my final run on your Op 20 Last Hive, 2 players are enough to finish this hive

. We didn’t fail too much, but probably playing almost for an hour. 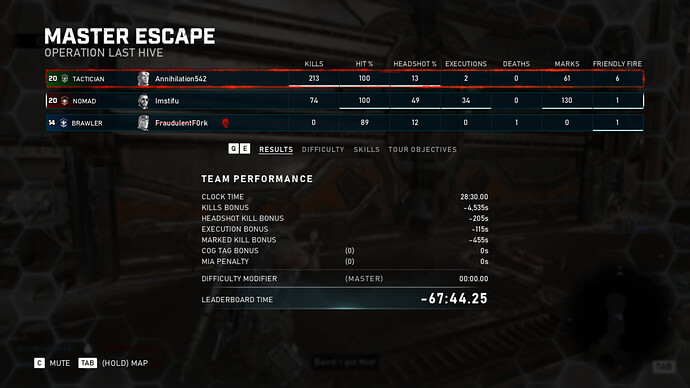 Finally, I have finished all your official hives from part 1 to part 20 (part 15 is in wrong code)in master with my friend.

Thank you for creating 20 hives.

I only feel the excitement in playing the last hive, sorry about that, but the rest of them are easy enough to play with 2 players.