We thought to make ourselves a little challenge (probably we’re not the first ones) by mastering a Horde match without JD. It turned out not to be so much of a challenge as we thought. We decided to run two characters that are mainly regarded as being “too weak” or “underrated” at least by the community to show of how good they actually are, even possibly how overpowered they can be. You’ll find some descriptions of what we did in the video description as well as the cards used per character.

PS: Video quality should improve throughout the day. Youtube is still processing.

Good work with that combination

Fahz and Marcus Nerf when?

I don’t think Fahz will be nerfed or needs a nerf. But Marcus can uphold his Ultimate for 40 waves straight even without the glitched out Claw so I’m not sure if that was intended… but we’ll see what TC decides. It’s nice to have another character to compete with JD.

Wow, will watch the full video later but fair play that’s impressive with both those two. I like playing with JD in matches on master but I’m relieved now when someone else does his job rather than me. For my skill JD has been needed in matches but I am working my marcus up to try him out more.

Just watched a few bits here and there, good stuff. Noticed you with the claw, would you mind going into what scenarios you like to use it with Fahz? I’ve always just stuck with longshot or markza for icy precision.

Its a “buffed” claw, Check the full description on YouTube for more information.

As Lena already mentioned, it’s a special type of Claw.

Mainly I kept it as a backup for Marcus in case he died. I only really used it against bosses since I can output more damage that way. Working with the Longshot just feels like more fun (and also outputs slightly more damage with one shot).

I don’t use Icy Precision, I see no point in using it.

Is Marcus using the buffed claw to extend the ultimate? Or can it be kept going with normal weapons?

As far as I’m aware the “buffed” Claw isn’t necessary to do this, the regular Claw and Retro are apparently entirely sufficient to keep it running for a long time, particularly if your team’s good at skipping the between waves timer.

I guess this is the thing - I can keep the ult going for complete waves with the lancer and claw, but with randoms the timer is usually the full 30s between waves. I dont think TC should nerf marcus ult for this reason.

For Commanders next challenge - It would be interesting to see if Mac could be substituted for Fahz in this case to get bleeding boltok headshots. A bigger challenge would be subbing out Marcus. Or Subbing out Jack.

Mac is still terrible in Horde and so is Lahni. We don’t consider using them in any of our runs. Mac relies on ammo boxes (due to hand-gun ammo not being able to be refilled by lockers) plus his damage is still weak even with maxed out cards. He relies on Trishots eventually.

Marcus’ Ult can keep going even with just Retrolancers (my highscore was from wave 13-50, we didn’t particularly skip many waves but JD was holding back a little bit). With randoms it can be a pain to even find a match where they don’t kick you…

Getting rid of Jack is not the biggest issue. It means you’ll save 33k on the Forge which you can use on other things. You’ll have less power to get perks running though and powertaps are more useful in that matter. Collecting power on the field is is also handy which makes Kait a good option (even if she’s already pretty good).

I can keep the ult going for complete waves with the lancer and claw, but with randoms the timer is usually the full 30s between waves

Which cards are you using? Most ppl playing Marcus are using the gold stim card but thats a mistake. Use Last Ditch instead and make sure to take dmg so you can profit from Last Ditch. With the stim card you take less dmg.

With a buffed claw you dont need any perks but without it its always good to have your dmg perk leveled up asap.

My marcus set up is stim, lancer,feedback, ditch and dug, but not extended mag. I might swap that out.

The thing about jack - is the healing beam, that quite literally is a massive lifeline. The positioning and the fahz reviving/revives in that run really helped you. I would have imagined not having jack would be really tough, not even thinking about power.

I take your point with Mac - something drastic needs to change to make him more horde viable. - ability to put boltok on WL, venom cards in horde, rebuff his bleed. Something similar for Lahni too.

It’s not the character, it’s the player.

Yea I used to run this setup too for savety measures (to stay alive). But with more damage comes less threats since you take them out more quickly. Band of Brothers and Last Ditch in combination is not a good idea since they’ll kinda rule eachother out. Use one of the two. The Extended Rifle Mag is also nice since you’ll pickup more ammo for a single pickup.

Without a Jack you just have to play a bit more defensively and you should still be good to go. Marcus can provide Stim and so can CoG Gear. Kait can also use her ability to revive downed teammates when needed. It’s just a matter of finding good balance. Playing without an Engineer would be the big difference here in my opinion. No upgrades for fortifications and they can onlybe repaired from bought Repair Tools (not to mention that these are expensive, you lose them when you die and you also have no benefits on them). 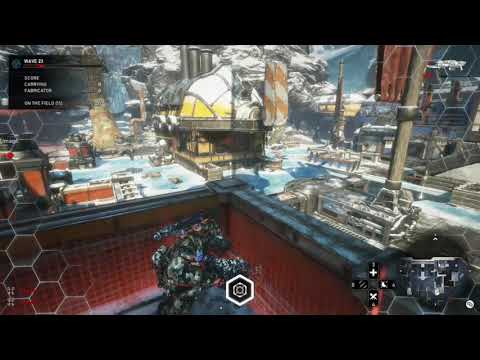 Marcus mvp Icebound wave 20-something without a claw… (No sound

I LAUGHED when once this one guy kicked me because he wanted Emile, because Emile had “health”, hahaha…

Just finished a run on Harbor, this one using a claw, see results:

Yes, there are options available now which were probably not originally intended, but the characters are soooooo broken, balance wise, having something positive come out , even if unintended, it’s a good this. They should embrace this, and adjust lockers to support it (like they did with lizzy barriers). This “exploit” isnt game breaking (unlike baird’s bleeding barriers were), doesnt flow over into escape, and just lets people use the claw in place of a trishot… Which is waaaay more fun…

And makes games without this overbearing dependence on JD far more feasable.

I am all in favor of this being embraced by TC.

Of course i have little hope of that happening, lol…

Just ran the hijacked claw & hijacked hammerburst strat with friends on 5 consecutive Master Frenzies. We breezed through all of them. The person playing Marcus topped over 2.5 mil damage every match and even pretty much soloed a Wave 12 Kestrel on one occasion.

Marcus mvp Icebound wave 20-something without a claw… (No sound

That’s a run with JD right? The challange is to do it without JD

This “exploit” isnt game breaking (unlike baird’s bleeding barriers were), doesnt flow over into escape, and just lets people use the claw in place of a trishot… Which is waaaay more fun…