Just watch how the kait downs me. Literally shoots air and it downs me mid roll.
Now imagine this happening every match every other gnasher battle.
This is me with 5 ping BTW

And heres an example of how the game plays when i encounter people with a better connection than me. EZ mode 1 shots and people barely hit me lmfao 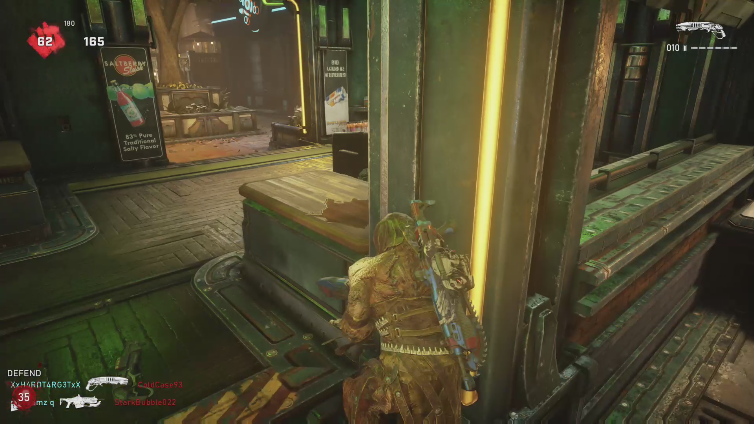 This is the same trash you see in GOW4. Absolutely pathetic that it returned.

Honestly none of those videos look out of place. You just got wrap around shotted in the first one which isn’t a lag issue. The other videos you it your shots and the enemy was missing shots so you won the battle.

You’re letting the pings make you think that’s the issue. Gears is a TPS which does allow for some funky looking stuff with its cover system. But you would have been killed in the same manner even if you both had equal 5ms pings. As I’ve said before to many others I’ve played with a higher ping and it’s in no way an advantage. The low ping will have the advantage and there’s nothing out there that can prove otherwise. The one thing that will break the game down, at least Gears 4, is high fluctuation players. But so far in the tech test it hasn’t been an issue.

In the end, just realize shots like this happen. You’re not a bad player by any means but don’t let lag be your first thought. The videos look legit although if you don’t do many of these wrap around a (which I do a ton of) you won’t understand it.

you first mistake is expecting a unfinished game to work flawlessly. it says tech test right on the client,

Your helping the Coalition test their servers, not yours.

I agree with you here. There is no advantage. The problem to me is the inconsistency, but as far as I could tell this was reduced in the Tech Test from
Gears 4. I dont care about having an advantage i just want to see less variation in damage and shot registration.

you first mistake is expecting a unfinished game to work flawlessly. it says tech test right on the client,

Your helping the Coalition test their servers, not yours.

The problem is that this stuff is actually in Gears 4. And devs. have a history of not fixing things from tests. Are they testing the gameplay or just the connection stuff? And what part? I will almost guarantee that in Gears 5 I will walk up to a player from behind and hit them full on with the gnasher. At so close it is an instant kill. But the player will just react and take a second shot and then kill me. I will get 98% in 2 hits while they get 100% in one hit.

Now, you could argue a lot of angles on this. Except the fact that the first shot was dead on up close on a stationary player. Or the fact that they missed part of their shot. I have seen this in Gears 4 AND Gears 5. Almost, a little, like it is part of some coding issue with the game.

Hell, I know people that can run through two people hitting them with the lancer and kill them with a gnasher. Talking about people with perfect active reload. Yet in Gears 4 and Gears 5 I have had situations were a player would just roadie straight to us. Both shooting with perfect active and the game acknowledging the shots hitting. And they visibly look like they are hitting. I mean, the player was sprinting straight at our position. Player gets close and gnashers us. Cool. 1 hit for 100% on both of us. We both get only a few hits each. In one instance it said I hit 4 shots from a full mag. No way and most definitely 100% hit way more than that. Watching clips it appears I was hitting. The hit markers were there. So what is the issue?

The thing is, some Gears fans could have these issues every game and never would admit it. They could literally run through lancers from 5 players and win and they would just think they were good and the other players sucked. Never questioning it. And how unlikely it is that all 5 did not land enough shots on their straight dead sprint to down them or anything.

I love the Gears series. All of them. But I see the issues and see that they are not being fixed. And Gears 4 has some really bad ones they never fixed. Seems like they never even tried. And then to see them in Gears 5. That sucks because I want to love this upcoming game. I am almost certain I do not play it for more than the campaign on GP. And this is a thing with a lot of the Gears fans I know who have played enough to get wings and stuff in 4.

I think I’d be more upset that 5 ping meant you instantly had an advantage. The majority of people don’t have that. Just because you either luckily live in the right area or pay a stupid amount of money shouldn’t automatically give you an advantage. Buying an advantage is what cheaters do with software. Win through skill, not your supreme ping.

Bruh my “supreme” ping gives others an advantage, its a disadvantage for me. Im asking for equality, being punished for better specs is ridiculous. Same ■■■■ in pc gaming when turning your graphics low removes all the foliage .

Oh ok. I read it as if you were saying a better ping should mean advantage. My bad. I agree that bad connections give players a latency buff, which usually leads to some major wtf moments. Sorry for coming off hostile like that.

This will never be fixed. What we could hope for is matchmaking works and prioritizes pings. There should be pools based on your average ping.