This is the perfect Example why i don't like the return of Chainsaw Drones... lmao 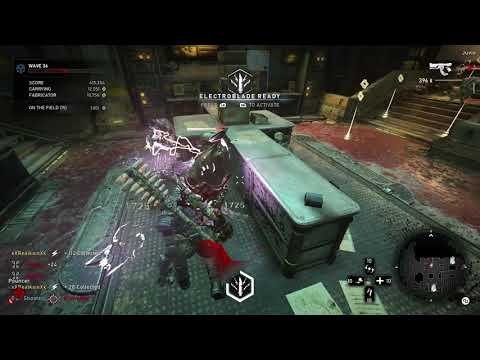 I dont mind them.

Did you have a lag spike or similar? You jumped from the top of the stairs to the corner, where you got murdered.

What ever you take i’ll take some of that.

You really tryin’ to blame my Connection for this, do you work for TC?

Another day they cut me in twice playing gunner during ult.

Yes, any invincibility status doesn’t include executions. That includes the Veteran’s passive ability; and Nomad’s Execution Shield too.

Sometimes the game makes them starting the animation a bit too far. I had faced some situations where I was unable to melee them although the AI succeeded to chainsaw me.
Other than that I think it’s cool to have this threat in the game.
In your clip it seems that you had some visual lag.

I think it’s cool to have this threat in the game.

Not everyone would agree that having an arbitrary insta kill mechanic on a non-boss or ‘elite’(eg Scion and bigger) enemy while they can prepare it faster than you can melee and said enemy is commonly spawned is “cool”. Especially when ghost melee still exists, and said enemies randomly decide to melee instead of attempt to rev the saw, as well as Shock Chain just deciding to not transfer over to enemies clearly within range.

The only ‘fun’ aspect of them is to bash their head in if you have the Claw out.

What difficulty is this? in what world does someone survive a Palace Guard Tbow stick on Wave 30+ ???

Tut-tut. You should’ve seen that Cyclops.

I don’t have any problem with Chainsaw-using Locust, I’m happy to see the Palace Guards and the return of Cyclops’.

It’s only annoying if they manage to chainsaw you through an attack that’s clearly landed,

It extremely rarely happens. I’ve had weird instances of getting stuck by a Theron or Guard with the damage poison active and surviving with low HP. Could be a bug as it also occasionally happens with Hunter Elites where their Torque does oddly low damage.

This is exactly what this whole Thread is about, also when they rev up the Chainsaw while you already performing the Melee-combo lol

In the world of using Shock-shield

Tut-tut. You should’ve seen that Cyclops.

I did see him, did you even watch the clip? Thats the reason i rolled back, but somehow teleported into his Chainsaw

that is what a series of my clips are called

As for OP, unlucky mate, can get your frustration.

Classic server-side correction of a players position. He jumped back while the Reject was about to block off the path. Since essentially every server is lagging, it meant the Reject was actually faster at the spot than he was, hence correcting the position accordingly.

I know, I was being sarcastic

I don’t have a problem with them as such, I think it adds balance to the game to have that threat to deal with, particuarly for CQC classes. What I do have a problem with, is the distance that execution animation begins. That drone was some distance from you, and shouldn’t have been a threat, yet you still got executed.

The distance that execution animation begins should be reduced in my opinion. In other words they need to be much closer to you for that execution to begin.

The distance that execution animation begins should be reduced in my opinion.

Surely if you were a Pilot using Cold Finish they wouldn’t be as much of a threat, being frozen and all.