Things that grind my gears in mp

1: The gnasher .
Pop shots with the gnasher are pointless . You don’t get rewarded with accurate shots because the spread of the is bigger than the reticle , (what’s the logic in that ?) . Might aswell not have a reticle.

Damage is just so random it’s stupid . 5 hits with the accumulation of over 15+ pellets you don’t get a down . Yet a hit from a distance eg the middle pillar on foundation to the box in the middle of the map . Doesn’t do any real damage yet the next shot that hits you as you half the distance puts you down .

Delays when pressing the trigger you either get a shot off or quite frequently a shot doesn’t even come out which I’ve notice a lot since this new tuning has been put in.

Delays shooting over cover and shooting players opposite your cover . Brings me to my first point your full square reticle is on the player yet half the spread only registers . I’m mind blown by this and not being able to shoot right away is even adds more to it . When we went through this in gow 4 people wanted instant shoot over cover , you put it in then take it out after a year the game had been out.
Big delay on the slide cancel shot is ridiculous.
This needs to be instant like before . It counters people that up a you or baits people out of cover which I find more tactical than your I’m playing with this tuning you’ve put in the game .

Why does the gnasher or how can it perform a headshot /instant kill when your players back is facing the barrel because you can’t shoot through a enemies back in line with their head to get a head shot as it doesn’t work ?
Also why can it just randomly give someone a kill by headshot when the player has full health ?

Why is the gib range so random it either gives you 99% which is a lie to the player when they have been robbed of a kill yet , this evidence here baffles me beyond belief 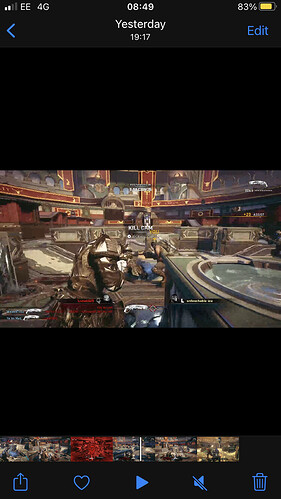 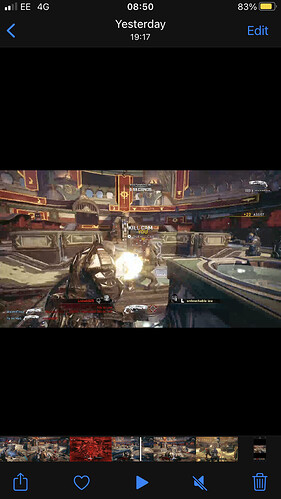 The hit detection is dreadful , I’m seeing peoples shots to the side of me when I’ve already slid across to cover , to be told on my screen they have it hit me when I’m literally the other side of the on the screen for at least 1 sec . Also I am wired. On 6ping . So don’t bring this internet connection comments to the table .
Here’s some evidence here , maybe aim assist and the hit detection 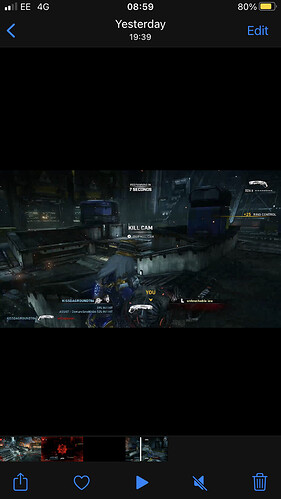 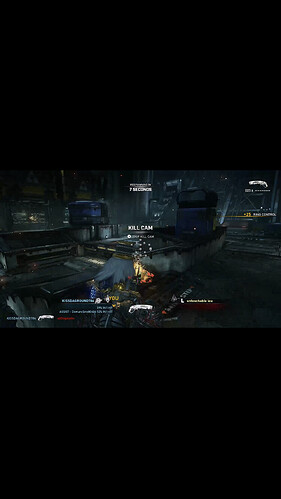 Since this minor update that you can slide quicker again I notice that my look speed aiming down sight seems a lot quicker for some reason , is that a bug?

3 .Power weapons .
Personally I think we should not have them in ranked .

Escalation works well without them the first few rounds so why can’t we just have loadouts only . No pick ups either
Or if this abit to extreme only have one power on the map like a boom or sniper .

I personally hate power weapons to me it’s just free kills for people that are bad at the game .
And with the maps like nexus and river there’s too many powers on the map . Especially river with the torgue bow people constantly say in the house the full match . Its pathetic. Every single time guaranteed when river is chosen .

Scorcher op , too much ammo , can’t see anything on your screen when getting damaged by it has far too much range and leaves trails of fire on the floor.

The most hated of them all the buzzkill . This weapon has aimbot on it , it magically bounces off multiple walls to hit you perfectly at the most stupidest angles you can think off . No way a blade should or can bounce off walls like that . Get it out of the game or leave it in arcade mode.

Last of all , Aim assist .
This game doesn’t need aim assist .
It should be removed from the game or if it’s too extreme take it out of ranked .

It literally carrying people thinking their good at the game . You can blatantly see there reticle is not even on you and the pellets sway on a curved angles to hit you . It’s pathetic .
Yes I know pc don’t have on it . But there’s no need for it on Xbox / controller.

Sorry for the big vent but I feel this game is very flawed at the moment and doesn’t really reward much to a player with good movement and accuracy.
It just seems the game is getting worse and worse .
I think a new developer should take over now .
People can fly are good candidates but i know they have a game they are working on so . Guess we are stuck with tc freelance developer studio

The kill cam is known to be highly inaccurate, isn’t it?

Yeah but come on now look at the distance of the first ram photo the reason I took the photo is because I knew he shouldn’t of killed me from that distance . I normally have kill cam off but this new tuning I had a few concerns so I turned it on to check and I was right . Kill cam can’t be that far off though

Says who? I’m not doubting you but I’ve heard this said a few times and wondering if someone did some research on this or if the devs openly spoke about it. If this is the case it makes sense why we don’t have a theater mode yet.

or if the devs openly spoke about it

They mentioned it in one of the dev-streams a few months ago.

The Gnashers behave differently each round and it’s not only the Gnasher is with all weapons one time you Play with boom cartridges and in the next Time wit Popcorn cartridges. This game is a big Joke

I remember when I was on strike for 2 days and didn’t play the game I seen a lot of people complaining about boomshot being terrible now but it feels pretty alright to me? I’ve had maybe 3 or 4 times where I noticed the nerf out of 30 uses of the weapon.

The only weapon I truly avoid now is the Embar. Weapon feels garbage now without it being able to one shot outside of headshots. It’s a great weapon for being annoying/forcing cover but thats it. Embar vs Longshot used to be a debate but now I’d say the sniper wins by a Longshot.

I’d say the sniper wins by a Longshot.

Oh that was painful.

I’m generally on board with this sentiment and have accepted that there are a number of frustrating inconsistencies that come with the Gears online multiplayer experience, particularly with the gnasher. That’s not to say that I’m ok with it, more that I know it’s either an immovable object or that it’s going to take a long time to turn this ship around.

The tuning discussion has been passionately debated and, having played enough recently where I think I, personally, have a feel for the changes, I can’t say I’m a huge fan. I’ve gotten accustomed to the movement speed and it doesn’t bother me really, I’m not much of a wall bouncing God in the base case. I do, however, despise the shot delays and the weapon swap lag. That fundamentally changes the game, for me anyway, and it takes a away some of the enjoyment.

In a quick twitch / reaction shooter like the Gears environment, that kind of stuff makes a big difference.

Taking power weapons out would be a mistake on many levels.

Buzzkill is annoying but then again it’s only present on like what, 3 or 4 maps at most? If you want to talk about an OP weapon let’s talk about the trishot.

Scorcher is fine IMO. A lot of people don’t even bother picking it up. It does have a ton of ammo I’ll give you that.

I just hate the delays. Shooting over cover delay is insane. The weapon swapping speed is terrible. Pop shots as you said are obsolete now. The spread should be tighter in a pop shot than hip fire.

The movement speed is bearable. It’s the delays that need to go.

Kill cam would be accurate IF the netcode worked correctly. 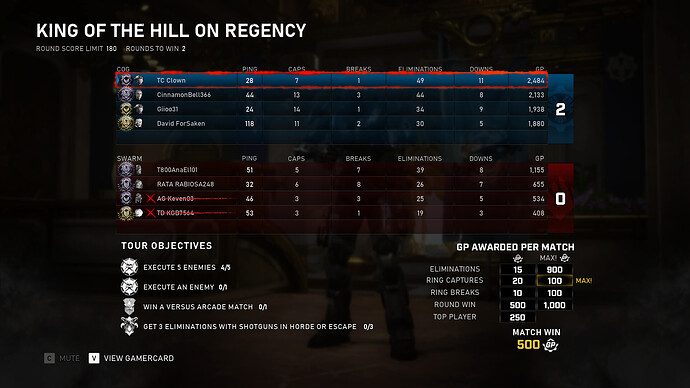 I hate teammates that don’t cap

Problem with the community right here . Trolling .
Give no real feed back .

So you like it when teammates don’t cap? Is that what you’re saying?

Some impressive progression I would say.

Yes exactly.
Oftentimes, people will complain about things that people do in the game, and yet do the same things themselves. Just making sure people stay off their high-horse.
Btw I love explaining satire /s.