There are plenty of challenges to be had, in Horde

I once set up on the side, it was tough because you get the enemy using the walls on the ends as cover and stay there. It was tough indeed. But, it was fun at the same time. The game forced you out of your comfort zone, and the game was made even harder with Bastions. being on the side, you are surrounded by walls, and Bastion love to hide whilst doing their thing.
Being in the middle is fine, you have a commanding view, you also are more of a target, and when you get to them 40 to 50 waves where you are insta downed by Snipers, it sure is an ouch moment.

I just want to max level all my classes so I can get back to playig for fun.

The downside to grind-y games is that the grind is always on your mind. My favorite classes got to lvl.20 within the first, like, week of OP5 dropping. Since then I’m not sure I’ve ever played them.

Granted there’s fun to be had on other classes, but it’s also decidedly not as fun playing an underleveled Protector or Striker when my Infiltrator is sitting there untouched.

These days I just play PvE when there’s an EXP bonus on the daily. When we get another 4x XP weekend, I’ll try to lvl.20 as many as I can.

If I play Demolitions or any strong class, I’ll use it with its fullest potential. No matter if I wipe out waves,

Yes, it is sooooo awesome when Demo show up to finish off 1% health left enemies which I’m shooting at, as Anchor, thus constantly preventing me from getting the bullet chain benefit… It’s sooo awesome, his help, yeah… Much appreciated. or when he keeps blowing crap up, preventing others from getting damage to re-set their ultimates… Yippy…

I prefer to play games without Demos; I’d much rather have a tactican on the team, he helps other classes, a demo just gets in the way, most of the time, I find.

it’s also decidedly not as fun playing an underleveled Protector or Striker when my Infiltrator is sitting there untouched.

Then why TF do it?

Play the classes you want, and enjoy… Why bother playing something you don’t enjoy?

I play classes I enjoy playing… I refuse to be a slave to TC’s grind mentality and trap.

Sounds good, but you don’t get to legend as fast as you did this OP without playing the grind no matter how you shake it out.

Man I do love horde on gears 5, I’ll give them that

There are people who i enjoy playing with, so i play with them, and we go.up in the tod just because there so many medals…i dont consider that grind…

But i dont play games just to advance classes i dont enjoy playing… And i dont keep running surge/clock hundreds of times for cards… Thats grind, to me…

levelling up the beast tactician

Tbh it’s severely OP so I can see why a nerf could be coming. Got a few classes I alternate with anyways and enjoy playing.

Yes, anything which makes Horde fun and not an annoying, stupid struggle is OP, and has to be nerfed, right?

Tactician allows several other classes to be useful, damage wise. If they nerf it, they are nerfing those classes too…

You know, Kestrel STILL stops shooting at gunner the moment the shield goes on, the demo still doesnt have marks which last twice as long, anchor’s shield still doesnt give 50% boost to numerous weapons… Stunned enemies still shoot at you…

In the elevated area? We’ve done that… Or do you mean down below? I think the only problem would be a swarmak because it would spawn close to the base, by definition…

You know, Kestrel STILL stops shooting at gunner the moment the shield goes on

Latest video footage from Xbox Live of HerrKätzchen playing Gears 5. Sign up on TrueAchievements to share your game clips!

That was fixed when … oh I dont know lol … but it was fixed. Never happened again to me.

I encounter more issues with enemies deciding to straight up never start shooting at me while my ult is active… even while they’re looking straight at me. Yet when it ends they suddenly become trigger happy again. But that is also random for when it does and doesn’t happen and with what enemies it does.

Mulchers are always very eager to shoot at me during my ult but Boomshot, and Dropshot Scions often are not decided if they want to blast themselves to death or not(even more annoying because Heavy Shell doesn’t get extended with the ult perk in Horde), as well as Guardians and more rarely Elite Grenadiers.

hahaha, happened to me 2 night ago! it was an identical situation to what I captured here 5 months ago : 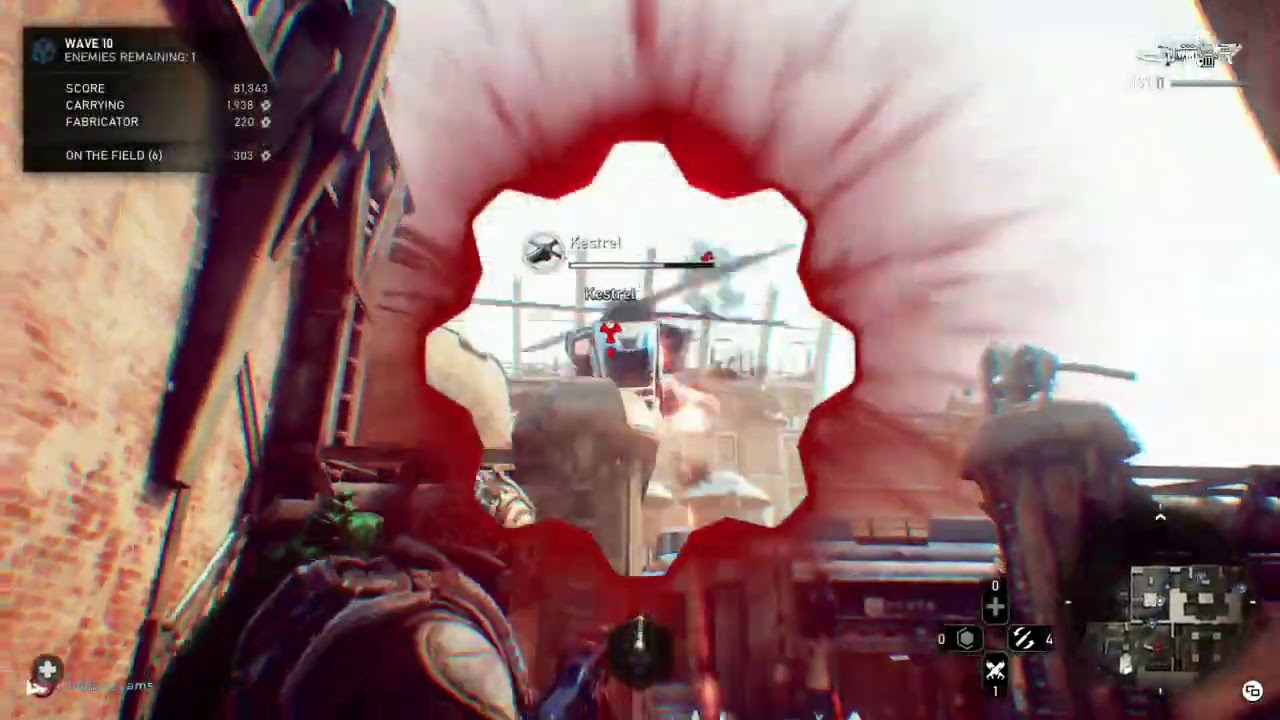 I’m sorry I didn’t capture the video clip this time, I just assumed it was the continuation of the same problem, so I didn’t bother recording it…

Stopped happening once they said it was fixed. Might have just been a once off. Sure if it is continuous then hit that record button and send it off to them.

Nope I’ve seen it 3 or 4 times this week alone. Both myself and others of my usual group. Only way I’ve been able to combat it is to group up. Even if it starts firing it stops when I fire the ultimate. Same with fliers. I can stand there right in front of them and they won’t fire again until my ultimate runs out.

Hmmm well im about to hit Regency with Clayton so ill see if its broken … again lol.

I honestly didn’t know it was supposed to be fixed. So I wasn’t recording it as I just assumed it was a long running bug.

There are ways to almost trick it inro doing it. If everyone else is down/dead, then it will fire at you…

But when it is like in my video, where it targets you, starts shooting, leading the bullets to you, you pop the ultimate, it stopped every single time i or anyone on my team did it… 100% of the time…

As recently as 2 days ago…