since the entire gears of war franchise (1,2,3, judment, 4) began, many people or players discover new theories about how and why it started:

In this occasion I will tell you about the carmine family that still existed within gears of war.

in the comic of gears of war rise of raam # 4 appears a pendulum war gear with a carmine name but old, that makes us think that he is the father of the 4 carmine brothers, in a certain way we can confirm it by the name that is Will or by thinking William Carmine would be his full name already taken from the rise of raam comic that I investigate, by the youtubers and by the comic, that we confirm that it is not the fourth brother but the father.

also with the conversation of Benjamin carmine for what he says: “if the four of us are, well now three, he knew some”. with this conversation phrase we can know that the fourth brother of the carmine family is alive, and some will ask how do you know if he does not leave the game? good simple in the comics do not lie and I possibly heard it from a youtuber but I did not know who it was because of the confucion of the one who was hehe. good forget it, participated if the day of emergency and fight against the UIR who knows possibly was a recruit like his brother Clayton who was part of war soldiers or pendulum soldier as they call (to be precise never appeared in gear pack) , then we can know that Diego Carmine (for inventing it) fought with his father in the wars of the pendulum.

To finish this theory of mine, we know that William carmine died in the hands of General Raam (uzil raam) during the day E. It is not known if he was with one of his children but it is not likely since some would be traumatized and killed by the horde locust , then with all our knowledge Antony and Benjamin carmine died in combat but two survived, it is not known even if you are missing in combat Diego Carmine but I will continue investigating.

Well this would be all I hope you liked this comment of mine on my theory I hope that TC can place the fourth brother carmine or even better in a gears 4 campaign but that it is a free DLC and gear pack to enjoy his last days of play. thank you and have a good day.

An interesting theory, except… 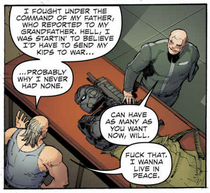 …its specifically stated that William never had children, didn’t plan on having them, and ultimately never would.

Very good point of view on the comic that I could not see, it will be because my English is a little rusty (to study). Then what we can say in the comic, 4 theories: