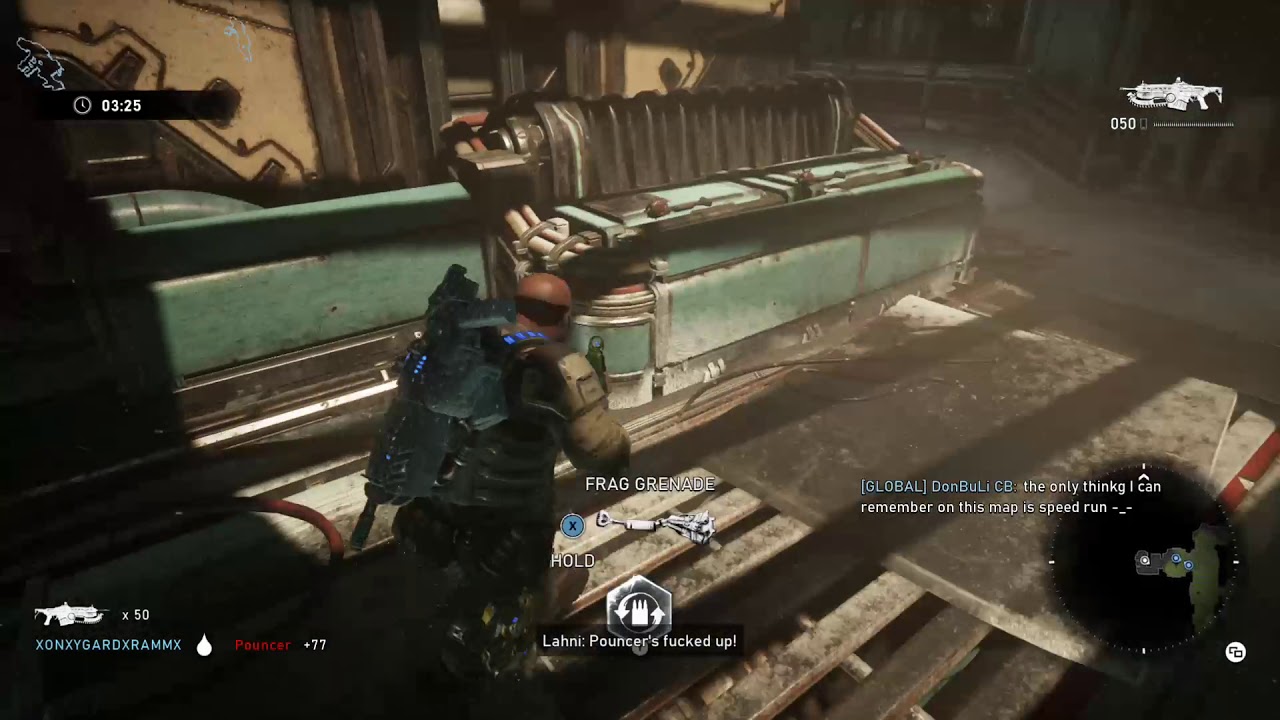 Check out the strategy used before the first safe room to get a Salvo for Keegan.

I mastered it with Cole, Lahni and Keegan and we used the same trick as above to get the Salvo for Keegan.

My master run was in early OP3 though, so I can’t say for certain if currently neutered Lahni can still do this. Alternatively, a Cole with high level cards can last forever in deep venom, so perhaps he could also retrieve a Salvo.

@BcuzimDRAGON If you were only giving me sarcasm, why comment. I don’t give a ■■■■ what you have to say if all you wanted to do is be sarcastic. ■■■■ out of here.

@HerrKatzchen Thanks for the tip. Never tried Kait but using her cloak would be smart. Used Keegan, Clay, and Paduk but had a rough time. Didn’t quite make it to the pad, but came close.

@NoLmtSoldier I’ll give it a look. Thank you.

I heard TC made more spawns after people started speed running it. Is that true? Lol

Edit: Yes I know. First line was a bit rude. But we can’t always handle putting up with people’s ■■■■ now, can we?

Any high tier characters, mac would also be fine on this hive, and Clayton is SUPER good especially if you want to solo the hive sole survivor can do most the work for you (such a broken card still)

I don’t know that I’m good enough to solo. I’ve heard many great things about Clay’s sole survivor card though lol. I’m pretty good most of the time in escape, but this hive is just giving me a lot of trouble at the moment. Thanks for the tip.

We did a Duo-run a while ago with Kait/Clayton and I was able to take out every drone on the right side in ch1 and every drone in ch2. You need to be REALLY fast though. Lv6 cards are a must.

With Paduk you could go to the left instead, there’s a Lancer there If I remember correctly.

I’ll definitely give it a try with Clay and Kait. And with JD and Keegan working together just for ■■■■■ and giggles lol. Thanks for the info. I really appreciate it!

Stuck on the Surge now. It’s my last one to go. Probably wanna say it’s the hardest hive. Then again, I haven’t had anybody on my team that actually does anything lol. So far my only progress is I can consistently get to the second act solo as Cole, while my teammates die then get resurrected in the safe room. Then they die shortly after starting the second act when they try to speedrun for the exit. I’m not trying to speedrun the second act though. Instead, I slowly kill the juvies, drones, and pouncers, and the few scions I can while I progress towards the end. I made it all the way to the LZ but then got killed by the scions there once. Nobody can handle dying more than once or twice so far. Mostly everyone leaves after one failure. I’m surprised they even join up when none seem to have any strategy in mind except trying to speedrun it like it’s insane, which barely any characters would be suited for on Masters with more lethal and more scions on.

Just beat it today playing with a god tier Cole and @RezRoller09. The Cole literally made it feel like a cakewalk lol. Don’t think they’re on the forums, but if anyone ever sees Led Zeppelin 69 in their lobby as Cole, you’re 99.9% sure to win. Amazing player.

Yeah played with him before. He’s alright, lol. Don’t feel like asking people to carry me though. If someone comes and helps, then I’ll accept the help though. I made it to the LZ once solo, so I reckon eventually I’d get it if I kept plugging away. On the other hand, maybe I ought to be more realistic and try the Keegan, Kait strat that HerrKatzchen recommends. I think I’ll try running through that on a lower difficulty first to see what it entails before turning it up to Masters.

I didn’t ask for his help either lol. I’d played with him before, and I was actually telling Rez how a Cole player like him would have been great right then, and I kid you not they joined the lobby a second later😂. I’d never been happier in my life.

Don’t bother speedrunning unless you’re just trying to get lucky. The Scions at the end of the hive and on the helipad are going to make it near impossible to complete that way. Any character that isn’t Cole probably won’t make it that far anyways.

Patience is key. The venom is so slow on this hive that you should just let things come to you. Build up ults and get explosives for Keegan.

Yeah I keep getting sandwiched at the end. I can either take out those two scions on the LZ, or that last mob rush with my ult but not both. Then when I use my ult to take one out, the other gets me. Gonna have to take a closer look at the Commander’s vid and pay attention to how he dealt with that.

I got MVP but Led Zeppelin is really good.

But nah seriously Led ■■■■■■■ carried us on the Warren and ice queen.

I’d recommend that method too - take the right side path as there’s Grenadiers there for Kait to lift a Gnasher from. It’s a hard encounter as there’s also two Salvo Scions and Drones, but the weapins are better (especially if you got Keegan and/or Clayton).

As I said, part 1 is basically preparation for act 2, so it’s not much use if people die and are resurrected at the saferoom as they lose their weapons. You ideally need to raid the last supply room before the saferoom for ammo (bear in mind part 2 has no supply rooms or ammo boxes). I’d recommend that even melee characters carry a spare weapon if possible in case someone dies - e.g.: Cole carries a Gnasher in case Kait dies and loses hers. If Keegan dies and drops their Salvo, someone else needs to grab it for latter.

I’ve already done The Line. I’ll tag along though if I have time lol

I completed this map on master with Cole and Keegan. I was Paduk.
I had the cards set up for a standard execution build.
I have seen a lot of users above state that they took the right most path.
I however took the ‘left’ most path.
There are a handful of drones at the far side of this room. However they are shielded by cover and they keep gunning you down. You and your team would end up spending most of the time taking cover, so a lot of patience is required.
Also keep in mind that a pouncer would also appear soon and ambush you head on. Cole can take care of the pouncer.
But eventually the drones start to mantle above the cover and start taking cover positions closer to your team.
All Paduk needs is to execute one drone so that his ‘Faze’ card can work (setting up a ‘fear’ chain reaction so after you kill an enemy, you go to another enemy who is afflicted with fear and kill it too. RInse and repeat. )
After that this room becomes relatively easy as Cole and Paduk can eliminate the rest of the drones.
At the end of this room, a supply room is present at the left, which contains lancers.
Once Paduk has his lancer, the journey to the saferoom along with your team becomes very simple (Also the rest of the map too. Any map which has a lancer present means that Paduk shines his best there).

The second half of this map is not a challenge at all. Go any way which you personally prefer.
I personally took the right most path. I had some juvies and some poppers.
At the far end of this room, some elite grenadiers started to spawn.
Eventually some scions also started to spawn. However due to rng, I was lucky enough to get a salvo scion to spawn. Cole took care of that scion and Keegan picked up the RL-Salvo.
Eventually pouncers and more scions would spawn in, but due to Keegan’s Venom resuply, he was able to blast them all.
The only annoying enemies are elite hunters in the second part of this map as they are armed with torque bows and could down you pretty quickly.
That’s all there is to this map. Just need good teammates and communication among yourselves would get this map done quicker. I was lucky enough to complete this map with randoms.
Hope I was of some help

Well finally pulled it off! Tried it once again today solo, but got frustrated, so then made a lobby asking for only Keegan, Clay, Kait, or Paduk to join. Got it on the second try. Just required decent players using the most survivable characters which are also suited to dealing with Scions well: Cole, Paduk and Clay. No speedrunning. That will screw you up when you get shot in the back. We didn’t take the left path in first act. First, took out the mulcher scions in the middle for Clay, then went into an ammo room so Paduk could get a Retro. In the second act, we slowly, methodically took out as many enemies as we could before the venom overtook us, drawing them out by firing at them. Me and Paduk stepped on each others’ feet a few times, resulting in Paduk going down a lot, but we pulled through anyway. Used the ult to kill the two scions on the helipad, then flashed the incoming mob and killed the ones that got out, just a few juvies and drones. The scion never made it out. There were a few DBNOs, but thanks to the survivability of these characters it never felt like serious danger. And now I guess I’m in the club! Feels good man. Welcome to help anyone that needs it. I’m not a god-tier player, but I don’t think one is really required. Just need three competent people using the right characters and having a good plan!

I’d recommend that method too - take the right side path as there’s Grenadiers there for Kait to lift a Gnasher from. It’s a hard encounter as there’s also two Salvo Scions and Drones, but the weapins are better (especially if you got Keegan and/or Clayton).

That path was pretty harrowing especially with the scions raining mortars from afar. None of the randoms wanted to do that, and tbh, I didn’t either. We ended up going the middle path with Paduk and Clay, getting them the Mulcher and Retro.