The State of Gears 5

The worst Gears? I guess. How is that important ?

Nah, 2 was awful with the exception of the campaign. 3 and especialyl Judgment were a lot of fun in MP.

Can’t speak about the PVP side of things as i’ve never really cared for it besides Overrun on Judgment. I do know from reading the forums past and present that pleasing the majority of the PVP community in every game since the first has been a thankless, possibly impossible task.

With regards to the story i really struggled with it on Gears 5. In most cases i would blitz through the campaign in a day or two but on 5 it took me around a month. I put that down to having less time to play these days but also because it didn’t grab me. I found the Hivebusters dlc much more enjoyable and almost a return to form after the series went too Hollywood with Gears 3. Peripheral stories around the main plot whether that be Delta squad and Locust or the current lot and Swarm could be the future of the series. I hope so anyway.

As for the state of PVE on 5, well let’s just say i don’t have a lot of kind words to say about the launch version of horde. When i first loaded it up after playing campaign i was shocked at what they had done to horde and completely baffled by the decisions taken by it’s creators. It was such a deviation from what made horde horde that it should have been called something else in my opinion. I’m not saying i hated it but at that time, i couldn’t be ■■■■■ with it.

Since OP4 the Horde side of things has improved ten fold. There are still some minor issues largely born from overcomplicating the mode with cards, classes, superhero skills, power etc but there are still minor issues with the older horde modes (Gears 2 1st game ammo box glitch for example). Some things you just have to learn to cope with at the end of the day.

So the state of Gears 5 is a mixed bag

Regardless, i will continue to play it whenever i get chance despite saying i’d leave it alone for a while a few weeks ago. New horde got me by the cahonies

State of Gears 5…I think it’s unpredictable that feel negatively towards the whole Game.

They try different ways to promote the advantages of Gears 5, but it’s not our expectation.

However, it seems currently TC are trying to put everything together that makes Gears 5 more finishable.

3 and especialyl Judgment were a lot of fun in MP.

Youre high, gears judgement played nothing like a gears game. gears 3 had a gnasher that nukes cross map and rifles that instant downed. You clearly never played a real competitive game stack vs stack on gears 3 if yiu think it was a good Balanced multiplayer game

Neither claimed or said any of these things. All I said was that I enjoyed them and had fun. Period.

Night and day difference compared to launch. IMO it doesn’t even feel like the same game anymore.

So yeah…for someone who has been playing Gears 5 since launch day, IMO the game is in a very good state right now. It’s still getting supported with great content (Locust back in Horde), fun events, and rewards…and overall it’s just fun to play. There is pretty much always something to do or strive for on a daily basis if you’re seeking it whether it be leveling up, ranking up, progressing through the Tour, completing the daily hives or horde, etc. The game is just way more engaging than it was at launch.

I actually agree with this…

When the netcode, pings, lag (whatever it is) is working…I love playing, but sadly that’s only about 5 percent of the time.

There’s just something wrong with this game that doesn’t happen with other games.

I think it went from a 4/10 at launch to a 6/10. Hivebusters (Campaign) is the best thing to have come out of Gears 5 so far in my opinion. Didn’t care for the Campaign, not in love with the current VS tuning. Escape was fun but it got old fast for me.

Horde improvements were fun but none of my friends play Gears anymore because the rest of the game is lacking… so.

I play Gears…
Am I not your friend?

Game’s in a way better state but man its crazy how often something breaks or bugs out.

When the netcode, pings, lag (whatever it is) is working…I love playing, but sadly that’s only about 5 percent of the time.

I walk away from a game when that happens saying “that was amazing” but as you said they are far and very few occassion. If this game played like that all the time I would spend very little time here lol because its unbelieveable when it does goes so smoothly.

I genuinley think there is something in the foundation of Gears 5 that is just messing everything up and the only way they could fix it is to do a complete overhaul of the game from the ground up.

Yes unfortunately the network performance isn’t always great and can be impacted by various factors like netcode, ping, matchmaking regions, server stability, etc. When it’s stable as you said, or matchmaking is on point, PVP is fantastic.

I enjoy playing Horde and I feel this is where TC focused a lot of their energy in making the PvE offerings as great as they can. I hope that this continues in Gears 6 but can we just transfer the classes as well as our progression rather than starting from scratch again. I am sure TC can come up with new classes to add and level up alongside the existing 15 - 19 if you want to include the Promos.

I love Escape but the fact they stopped supporting it makes the future of Escape uncertain for Gears 6. TC could have solved the problem of creating new maps if they just gave creators more tools and a higher spending limit. Giving these maps the ability to earn exp and cards would increase replayability of the mode.

PvP was great during Op5 in my opinion. Op6 came with another change to the bloody Gnasher which apparently was to make it more consistent but somehow has made the Gib range larger. So either the gib range was always supposed to be that large or it was a stealth change.

Shotgun battles are a rare occurance now and when players upload their gameplay which is all gibbing it just looks so boring. Play for chunks only lobbies when?

Am I not your friend? 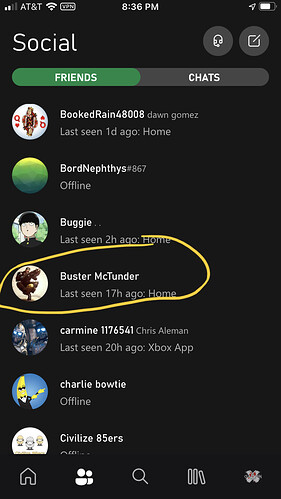 That just means you follow him, it doesnt mean he is your friend,