I’ll get this out of the way, I’ve played with many friendly and helping players since the game dropped but lately it has become out of control and unrealistic.

So I am Re-Up 20 and have a level 18 Marcus with almost all level 5 cards and still get kicked from lobbies multiple times a day just for asking for some cooperation from other players, I am sick and tired of this notion that unless you play as an Engineer JD, Kait, Jack or Lizzie you cannot contribute on higher difficulties.

It’s just how the Horde meta/culture has panned out unfortunately. People want the easiest route to finishing Horde games and only want to use the established powerful team set-up and are unwilling to try anything else even though it’s perfectly possible; and some of the other non-meta characters are pretty powerful.

My only advice is to play with friends; or at least host your own lobbies so you’re in the driving seat.

I only play Horde with friends.

Yeah I can’t get my friends to play with me like that, most either don’t do Masters or just playing Versus.

Honestly the only character who can come close to JD in terms of damage is Marcus but people actually think Lizzie and Kait are better lmao.

Make your own lobby.

I will say it wasnt Master difficulty, but playing Experienced (leveling Baird and playing with a very very nooby friend of mine) on lift without a JD, Kait, and Lizzie (coming from a normal Lizzie main) was a blast

I believe the squad we had was

never had this problem tbh… however as my fellow friends has stated, it would be a good idea to play with friends and make you own lobby

Block the host he will have to accept the Marcus

Extreme solution, but it would work…

Except there is a workaround to that host blocking. But I’ll leave it to people to figure out how to do it. In part because the person I helped figure this out refuses to post it on the forum themselves.

Sometimes, they would rather end the match.

I wanted to add a bit here… I don’t get how people can tolerate this JD game(because let’s face it, if there is a JD in the match, that’s who will most likely get the majority of the kills). Putting aside the fact that I think it is ridiculous a single extremely easy to aim GL rocket easily shaves off 50+% of a Scion’s health while other characters have to put minimum 3-4 shots or more to bring that same Scion down(besides perhaps Fahz in X-Ray), it is just so damn boring and lackluster. Bosses mean absolutely nothing, they just die to bleed. Everything else also gets nuked to death immediately. Hardly anything happens that makes things get more interesting, and if it does chances are you won’t be able to salvage the match if the base was not built really well and/or the other players can react quickly enough with the base setup specifically made to maximize JD’s killing and not that of the other players. People should tell if they see this screenshot whether they thought that the game was any fun for Kait(me), the Lizzie player or even Jack and Del. But sure, JD is perfectly fine and there’s nothing that needs to be done about the character. Totally requires so much skill to spam fire and forget rockets that require little aiming too. 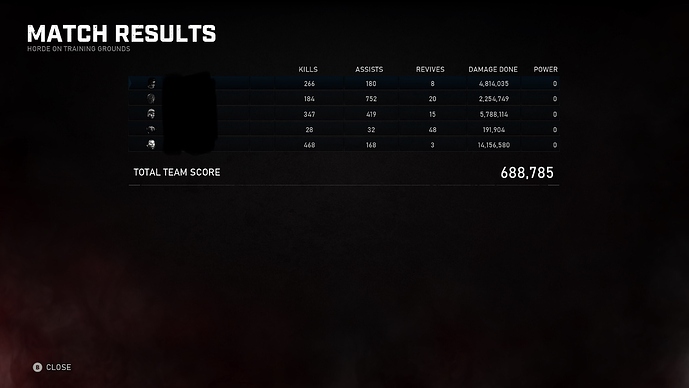 The only arguments I see in favor of the JD meta is the stupid Bastions that are way too annoying to get rid of even with Kait, especially if they’re shielding a Mulcher and keep coming over and over and over, or if a Matriarch and Carrier spawn at the same time on Frenzy and there is little you can do to stop them from waltzing in and wrecking everything while you can’t really leave the base, but that goes more to show how terribly underpowered/inadequate the majority of characters is for boss killing and/or damage dealing to flying enemies in general, and how badly the enemies are made. Even when you’re just playing a difficulty like Elite.

And then there’s the subject of how 90% of the playerbase seems to be caught up in grinding over actually enjoying the game, or constant Master runs. The maps found in the Horde lobby browser(Gears 4, or the “easy” Gears 5 ones) or the majority of Escape runs being on Clock and Surge at almost any given time are good indicators for what I’m pointing at. That’s something else I could go on and on about.

The major changes they’ve done to hoard is the main reason I don’t play it anymore, if you want a good hard game you got to go back to gears three, four is only slightly better than five.

Bring back Guardian and the REAL horde!

Ame to that man

yes, it sucks, but you can host your game, and maybe some other players join

The worst thing they ever did was introduce regenerating health. Why? Since when has this ever been a thing in Gears? Enemies are already bullet sponges as it is, now if you don’t do enough damage in 5 seconds they get all their health back? Stupid, stupid idea.

Probably the only reason for Master difficulty is to make modifiers that make it harder.

Atleast in gears of war (1 to 3), It was health, accuracy then damage received.

Unless it was all 3 modifiers but times the difficulty.

@AmicableWall421 dude, your read pm about it all being about “just grinding it out and getting it done”. Just like you said with Escape and custom.lobbies being all clock and surge. And the JD meta with Horde. Nobody seems to play just for fun and for the hell of it.
That’s why id rather just play the weekly hive with Randoms or fart around in private H orde with bots. People take the shiit way to serious. The horde elitist act like there is some flowchart we are all supposed to have memorized. We are all suppose to only use these 5 characters. If you wanna play someone else just for fun, get the hell out of here. All Characters must be level 15-18. The “base” if played on Dam goes here. Played on District must place here. Engineer must have 3 ,level 4 lockers built by x… barriers done by Y. Jd gets all ammo. Players must deposit x in the fabricator at round 1 and deposits proceed on a sliding scale per round and per character. Any.power used for personal perks results in an immediate kickk Jack must do nothing but smelt and revive. Yes he has an ultimate that can be used offensively or defensively…but that would get in the way of his power output. Blah blah blah. Dont see how any.of that is fun.
Id love for TC to attach a randomizer mode to Horde. Along with a really great skin set to the mode. And for every time you and 4 others complete all ,50 waves using ,5 completely randomized characters you get 1,skin of the set.And, every.time you go to completion, you have to play the next 50.on the next skill level. Something like that. I think it would be awesome.

This is basically why I only play Horde with friends and have done since launch. We make our own rules and challenges.

We’re grinding to max out characters right now but alot of our Inconceivable runs are without JD, and sometimes no Kait either. We’re using Kat as an engineer too (very underrated with my favourite ultimate ability of all three engineers!)

Eventually we’re planning to do a no-JD Master run; and then some no-bleed-card runs, just to challenge ourselves.

I agree on the Bastions though, they’re real pain. I’d like to see them nerfed a bit. Maybe allow players to destroy the shield if it takes too much damage, or change the shield so it’s smaller and doesn’t obscure firing lines as much. Or make them frontal shields similar to Mac’s ultimate (so splash damage behind the shielded enemy can still hurt them)?

Tried to get some game(s) on horde,This very morning was a nightmare,Tried 3 games either the host left or the game was throwing you around the map,currently re-up 18 (57),sadly I’ll take a break til operation 4.Sorry Op If this was off topic.