Any character with a taunt card like Clayton or Mac are extremely useful. It buys melee characters space and time to go in close range. Lizzie’s one is less useful as it only applies to full health enemies. Fahz is good but you need to get to the supply room toward the far left side of the map to get the Longshot. Cole or Lahni are good melee choices.

The last few times I’ve mastered it has been as Fahz with a Cole and an Emile.

There’s a Longshot in either the left or right supply rooms at the beginning. Try to pick a side that doesn’t have a Freezing Mulcher Scion if possible. They are quite deadly.

Except during his X-ray, Fahz can’t one shot the Scions (even with level 6 cards) because of the More Scion Health mutator, but he can do a lot of damage. A melee class is great for cleaning up weak Scions.

Save Fahz’s X-ray for the last big room before the helipad. He can clear that entire engagement really fast. 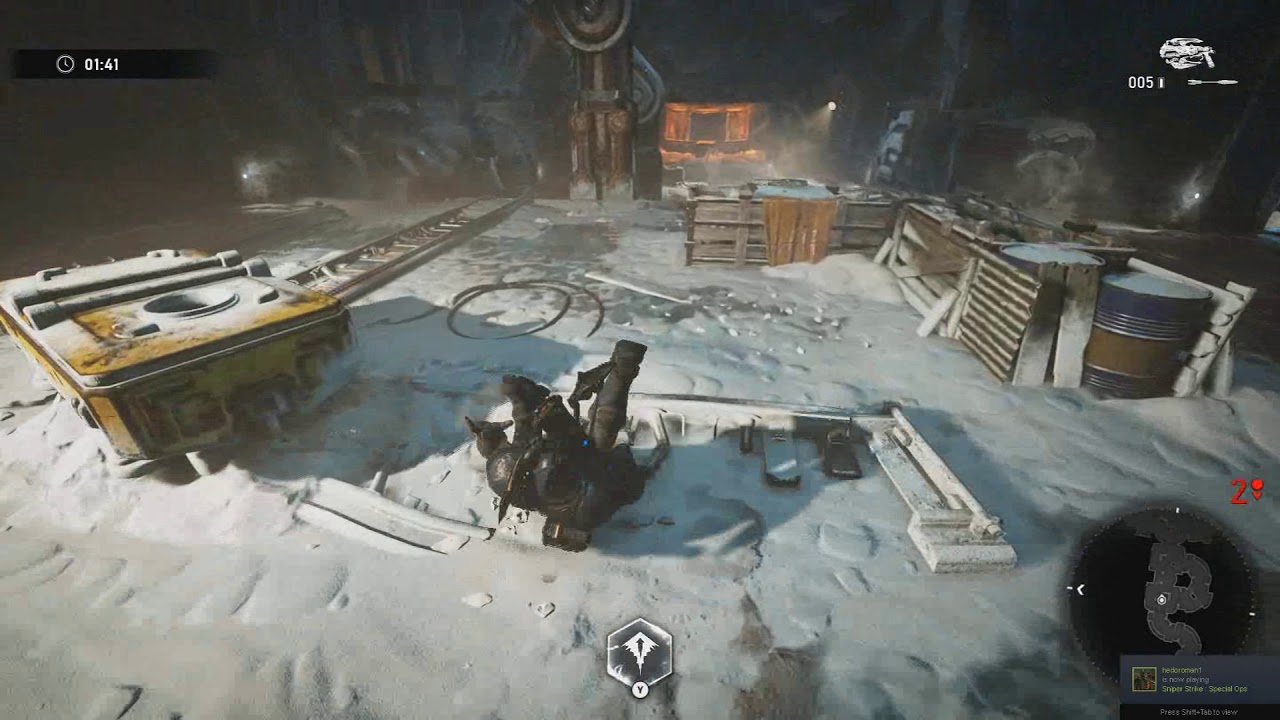 What I recommend is having a Keegan, Fahz and Cole. Cole is very handy on taking out the big boys in close combat. It’s a little rough at the beginning which is why Fahz and Keegan could go into the ammo room on the left. If you just walk, you should usually be able to sneak into the ammo room undetected. Keegan can then get the bow to easily get rid of the Scions there. After that I recommend going for the ammo room on the right so that Fahz can get his Longshot and from there on it should be pretty straight forward.

Things as Cole you should know:
Ice Scions are your worst nightmare. You can only tackle them once. Similar thing applies to Mulcher Scions. Anything else can be tackled endlessly.

But after playing extensively and a few runs with @SPARGELKOHL I can safely say a Clayton over Keegan is the way to go after a number of runs.

Reflect shredder doesn’t do ■■■■ this Hive because the mulcher freeze modifier doesn’t redirect the bullets back. So I can say it’s a dead card this Hive. And Heavy shell only works with the BuzzKill and Dropshots (Only if the latter hits you on the way down)

So I’ve found running Clayton as the distractor with grub magnet and the other two dealing damage to the scions while Clayton tanks ■■■■■■■ everything is a good way to advance in the hive.

He also does good damage with the torque with torque bleed VS Keegan.

It’s frustrating and I’ll definitely give it another shot tommorow with a fahz and Cole.

I wouldn’t rule out Keegan though. There are plenty of Dropshots, Frags and red ammo boxes (if my memory serves me correctly) so Keegan will have the means to dish out damage. Clayton doesn’t have that, but as you say is tankier and his abilities can support the team by distracting them, or stunning enemies with Concussive Explosives.

The first time I did it was back in the Op 2 days and used the launch characters Lahni, Mac and Keegan. I know some people used Emile with some success too, and this team relied on Mac using In Your Face and hitting headshots to buy Lahni time. This team had to ride the venom to be effective.

I did it again last week with Cole, Clayton and Fahz and this was straightforward too. Same principle - Clayton uses Grub Magnet to distract Scions while Cole goes in to tackle. Once Fahz got a Longshot he was able to help out too (although our Fahz wasn’t that great). Clayton also grabbed a Dropshot and Frags to use to help out as well.

If Cole has his melee immunity build, then you can isolate single or pairs of Scions who are close enough by standing next to them and keep punching them until they are dead. The Scion’s melee attacks will just go through Cole.

Clayton is great since he can shrug off the heavy weapons (92 percent resistance with Heavy Deflect and Bait Armor) and can wreck the Scions with Mulcher, Cryo and even Buzzkill. Fahz can kill the Scions easily with the snipers you can acquire from the left and Cole, well is a tank and with Clayton support, can even become impervious to anything short of Cryos and Dropshots.

Keeg, Clay, Lizzie, Cole are good picks. We did it a couple times. One time, I was Clay and died over and over, but still helped by stunning Scions with explosives and using the mulcher mastery and ult to kill scions, and then Cole kept getting me out of the pod. There’s no ironman, so you can come back as many times as necessary so long as Cole stays alive. Another time I think I played Keegan and we made it out everyone ok. Yeah, it was one of the harder hives. Don’t think it’s really that fun to play either. Just one overpowered scion after another and not much room to move around or time to think.

edit: yeah almost forgot not a good idea to use reflect shredder on mulcher scions. Learned that the hard way, lol. But once they drop their mulcher, you can use mulcher mastery to take out a buzzkill pretty quickly and charge your ult up too with heavy charger. The ult with heavy shell is good against the buzzkills though.

Revisited this hive today with randoms and didn’t have much luck. Looking back now, I was probably with some really good players when we did this. On a positive note, I was able to test some things out with Clay, who is interesting on this hive even though he needs some good teammates still. Serrated Edge with the torque at the beginning should be enough to take down the first scion who comes to the door at the ammo room. In my case it was a freezing scion. He drops his Cryo cannon, which, if you have flash freeze and freeze resist on, you can outfreeze the next ice scion. LOL. I literally stood in front of him as we blasted each other with the cryo and I won. Once it’s frozen, it takes a ton a damage. One torque headshot kills it, otherwise everyone can start headshotting it with their pistols and it should die rapidly. After that though, there wasn’t much strategy. The freezing mulcher is too overwhelming for any of Clay’s freeze resists or ultimate. You might try popping your ult, getting up close and freezing it with the Cryo at the same time. That seemed to work, as it will start to melee but you won’t take any damage with your ult on. but kinda hard to pull off. But by that time, the venom is closing in and other scions are closing in. I really needed someone else to take down one or two scions for us to progress at that point.

Yeah that’s probably what I should have done. Good idea. It’s really those mulchers that are wrecking the team.

Did manage it again wearing a bunch of resist cards including uncle Clay and Lizzie. Seemed to be going well for a while. I could tank all except the dropshots, and was able to freeze the unshielded scions. Unfortunately, Liz and I perished at the LZ and we just relied on Cole going ham there with his ult to barely scrape by. So I’ve been able to just get it done a few times now, but not very convincingly. Would like to get a strat down that didn’t rely on Cole.

He’s legit the most tankiest character in the game with uncle Clay, bait armor, and heavy resist.

Probably beats out Cole at his best.

Update: Did finally get it tonight with a team of Lahni and Keegan and no one died. I wore:

I owned all the freezing Scions and took their Cryos for ammo. It’s funny, with all those cards, the freezing Scions become Clay’s *****. You can just stand in front of them and tank them and freeze them so long as you don’t let them melee you. Then kick them a couple times and they die. I could also help freeze the Mulchers and Buzzkills, but the Dropshots were my weakness. Thankfully, Keegan and Lahni danced around enough to take care of them for me. Keep in mind, this was after like 10 fails, so it did take some perseverance and some randoms that really wanted to get it done without Cole.

I was playing with sparge and told him. “■■■■ it’s like they’re spitting water at me”

I just realised that there’s a spawn of 3 Scions that you can actually block from spawning if you progress through the first bit fast enough.

Basically there is a map tile which features on the Rail Line (as well as several other Escape Hives like the beginning of section 2 of The Warren, at the end of The Gatekeepers, the main room in The End, and the 2nd section of The Choke to name a few). It features two stairs opposite each other and a kind of bridge across the top middle. On The Line there is also a weapon locker on top of this as well. Anyway, there are normally 3 Scions that spawn here, but I noticed that they don’t appear if you progress there quickly enough. I presume the spawn is on a timer so the Scions aren’t there at the very beginning. Worth making a note of this detail if anyone is finding this hard. Score runners also make note as you’ll no doubt want to fight these for the extra points.

Thanks to @todo_ese_jugo and his Clayton build!

When it comes to heavy weapons and explosions (if Blast Shield is on,) yes provided a Lizzie is with you. Otherwise, he hits 90 percent damage reduction to everything which is less than Cole’s 95 percent and his 60 percent more health.

Ha! I can’t take all the credit. It was partially your idea! Still waiting on that Solo Clay vid. Don’t think I could ever pull that one off.

It’s coming whenever my cable company decides to come out, they got to rewire the cable in my walls for faster internet and with Lil’ Rona they’ve suspended home visits indefinitely

As far as I can tell that spawn is not scripted to be there at the start but instead triggers when you enter the tile. However in Op 3 or 4 TC added some spawn patterns which do not have it. So if you get lucky you don’t have to bother with them, not that it’s nearly as ridiculous trying to deal with those as it was back in Op 2 while you had venom behind you and the Scions from everywhere you didn’t cover in the starting section deciding to march through the cloud of death to come after you.

Am I right in thinking that there are no shotguns on The Line?

I don’t recall there being any in the supply rooms, and obviously Scions don’t carry them and they’re the only enemy. Is that right?

It’s just I see lots of people wanting to go in as Kait/Infiltrator. I presume they’re just looking for a cheap carry?

No shotguns. The only potential use an Infiltrator has is to use cloak and nuke one Scion out of existence with one active Longshot or Torque Bow to the head. Maybe useful in a pinch, not so much otherwise.