I currently am #4 on the leaderboard, though I don’t imagine I’ll stay there long with no Ironman mutator.

This Hive was difficult, the close quarters and the fact the minibosses can swarm you in 10-20 seconds if you’re not laser focused on taking them down.

It’s a tough claustrophobic Hive at first. With bosses that hit hard and kill you pretty much instantly.

The later half with the snatcher and swarmak were pretty straightforward easier than the first half.

I took it down with Kait (Me) Fahz and Mac.

This was on my 4th attempt, the Mac stayed the whole time. We couldn’t beat it with Keegan, Lizzie, or Paduk.

Fahz really shines in this Hive with the abundance of ammo and the open ranges at the later stages as well as freezing precision with the snatcher, he was legit the reason we were able to beat the hive, and Mac with his barrier that can kill the swarming juvies was really clutch. His boltok speaks for itself.

There isn’t a single gnasher in this Hive (That I’ve come across) and the Overkill while effective at long ranges acting as mini sniper with reduced Recoil on. Doesn’t have the power up close as the gnasher.

Being able to stun for after one or two shots due to the high DPS it’s able to shoot out in close quarters action. Was something I had grown accustomed to, and I had to get used to the fact that the Overkill doesn’t do that.

Staying back and picking off their health shot by shot was way more effective and efficient than running up and trying to Rambo it with the Overkill.

The part I struggled with was the DB encounter, whether it be the guardian and sentinel or the DR-1’s with bastions.

They’re quick, the Sentinel and Guardian can hold you to the room and make you wait there till the venom kills you. Trying to push and you can be obliterated in seconds.

We’re waiting in the room so long my cloak was able to be activated. So I cloaked, ran out and was able to sneak kill the Sentinel ignoring it’s shields and then Fahz activated his ultimate and killed the guardian.

Rest of the hive was stayback, plant traps with the shocks and let Mac kill the juvies.

The swarmak was piss easy because of shotgun bleed but

we all assumed it was going to be anyways.

Also 30 cards this time but 15 for past hives? Keep it this way.

Keegan and Clayton is a combo I see working really well, Clayton with ultimate battery and team resist could put in some real work if you have competent enough teammates. Just keep re-rolling until you have the salvo and mulcher scion at the start and you’ll have an easy time I imagine.

I think people deserve a warning that you can also get a Matriarch in the second act rather than a Snatcher… while you get Juvies and Grenadier Elites coming at you. Fun.

I completed it just now. It was okay. I did it with Fahz, Cole and Keegan. The hardest problem is the Juvies, Elite Drones and Grenadiers who constantly push you so you need to watch/listen out for them. The bosses themselves seemed reasonably straightforward. Cole had to run back and forth to deal with the Juvies while Fahz sniped Drones etc, and Keegan primarily dealt with the bosses.

From my limited plays, I believe the rooms feature the following combinations of spawns:

(1) 1 Cryo Scion and 1 Dropshot; or 1 Mulcher and 2 Pouncers (CORRECTION: It seems that the Scion combinations vary much more than I originally thought and what kind of Scion you get isn’t restricted as I mentioned above. For example if you get Pouncers, then the Scion won’t necessarily be the Mulcer - you could get a Cryo as well. However if you get two Pouncers then you will always only get one Scion).

(2) Bastions and DR1 Opressors; or 2 Sentinels (CORRECTION - the last combination is actually 1 Guardian and 1 Sentinel)

(4) Always a Swarmak. However from my observations if you previously got a Snatcher in the previous room you will get Elite Snipers too with the Swarmak; or if you got the Matriarch you will get Elite Hunters. Regardless there will be extra Grenadier Elites and Drone Elites, plus Juvies in this section.

Bastions and DR1 Opressors; or 2 Sentinels.

Add Sentinel + Guardian backed up by Deadeyes and Shepherds to that.

You mean to the second spawn? I wasn’t totally sure - I just X-rayed them and saw two Guardian/Sentinel shaped things. So it’s one of each?

I had a Guardian and a Sentinel spawn together in the second boss room of the first act.

Okay, my mistake. Looking back, I remember ripping out a Trishot while my team mate got a Salvo from thay room. I’ll amend it.

I had completed this previously in a PC lobby but will need to do again for the Leaderboard. Wasn’t hard at all first time round.

Trying to Solo with Clayton, definitely possible. Got to the Guardians and sentinels.

Killed Both of them, died to a peacekeeper

I got to the Matriarch and will try again later. The first room I nearly always got a Dropshot and Mulcher Scion so far. The second room is a PoS when there are Bastions because they get stuck high up sometimes and can still shield enemies, like DR1s with Salvos in the other section. The Matriarch room had Elite Grenadiers pushing us as well and those got us down. It’s pretty tough so far.

Seriously though, when will people learn to mark enemies? It’s getting very tedious and nearly every time it seems like I’m the only one doing it.

Here’s a tip, retreat back up the ladder and blast the Matriarch with Keegan, while your Kait and Fahz shoot down on the Grenadiers as they struggle to reach the ladder. 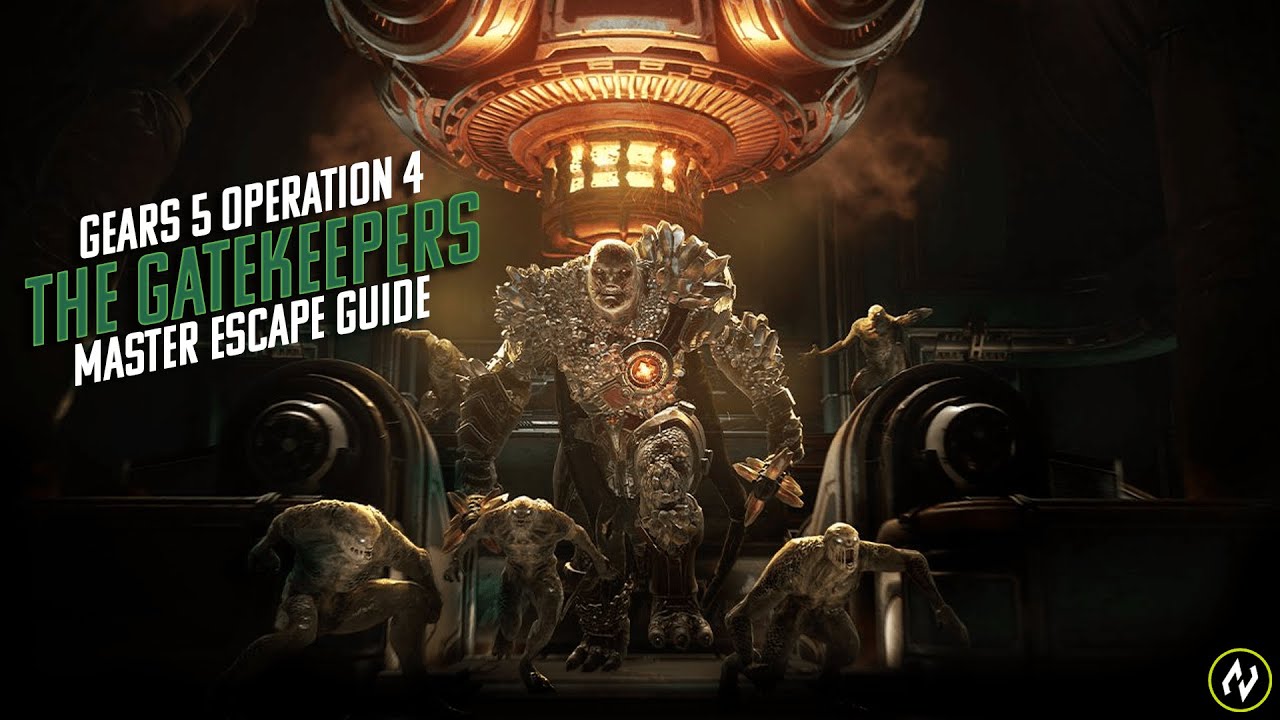 What makes this hive different from the others is there are elements similar to Horde. What we mean by this is that The Coalition decided to add more bosses into a hive. In this particular hive, you meet the Snatcher or Matriarch and most importantly the introduction of the Swarmak in Escape.

The team composition that worked best for my teammates were Keegan, Fahz, and Cole. While this team composition worked for me, it may not work for you. It’s critical for your success that your teammates be high leveled and have level 4 cards at minimum.

As Fahz, use X-Ray perfectly and be sure to aim for the head and land them. Ambush, Exploit Weakness, and Modified Longshot will provide Fahz with 200% + on Headshots. Assuming you one-shot kill an enemy Fahz will inflict splash damage to surrounding enemies as the enemy killed by the Longshot will explode.

Unrelated question or maybe not. Any know what the hive rewards are? Everytime it comes up that I made the top 1% or the 5% it never says what I am actually getting for it. It just has the little cog symbol constantly buffering.

As a comparison, getting into the 6-10% bracket gets you 750, so not much difference.

I liked the mechanic of having Gatekeeper enemies. However it felt a bit weird that the final gate couldn’t close until the Swarmak was dead and also the Venom got out of there…

Well at least it certainly was the most difficult hive to solo.

People are overestimating how effective they’ll be with the usual boss killers when getting harassed by large amounts of filler enemies. Tried it a few times. I kept getting into rooms with Kait and Fahz who demanded I be Keegan. Trouble is, we couldn’t get out of the first encounter what with all the juvies and drones that bumrush there. Lot of help I could be as Keegan with my hammerburst and lancer with few bullets. These people were stubborn though, as they would keep restarting over and over until finally I just had to throw in the towel and leave.

Finally got into a room with a Kait and a Paduk who let me be Cole. Mopped up all the filler enemies no problem. Every encounter was so much easier. No more stress when a herd of juvies or two overkill bros were closing in. Died once at the Swarmak as we did get overwhelmed quickly when he trapped us on the platform.

On the second try I had another idea. I ran towards the LZ to split the herd. Then mopped up all the juvies and drones, so my teammates didn’t have to deal with them and could focus on the swarmak. I helped out a little with swarmak by shooting it in the back with longshot and boom. Paduk, unfortunately, got caught by a popper while we were in the LZ. Really, though, my teammates were the boss-killers, while I was the cleanup guy, Sorta like on the Ambush, but this was more extreme cleanup.

Only got 7% though. We may have made it to 5% without dying and if we had been marking enemies. I’ll think I’d be able to crack 5% on a second run. I don’t care too much about rankings anymore though since the rewards got nerfed.

Cole is awesome for mopping up all the loose enemies, especially for those running All The Glory and damage resistance cards.