On and Off the past few days after attempting the gatekeepers with only clayton, I have been experiencing fps drops after 2 hours of attempts. I thought it was just me dealing with the suspicious FPS drops but another person who is working the same map is experiencing the exact same thing. This is pretty unacceptable.

For real though, does this honestly suprise you? Onslaught had massive frame-drops with the Shock-poppers and TC still released the hive with them.

I already did all the resets neceessary on my end. It doesn’t happen on any other hive or game type. Just this one. I guess it doesn’t suprise me now that I think about it.

I experienced the frame rate drop on The Onslaught, but haven’t noticed it on other maps as a general rule.

The only other time I’ve noticed it, is at the end of The Clock if I spawn trap the enemy in the back square corner (this is the enemy spawn after you hit the helipad door switch), and jump in as Cole or Lahni and use my ultimate. I figure as some of the enemies spawn literally on top of each other, the game struggles to render so many enemies dying and new ones spawning on the same spot, as well as the fire or lighting effects from Cole/Lahni.

It’s not The Gatekeepers only, but it’s playing Escape on PC totally.

There is a huge memory leak after establishing a private lobby and playing for long period of time, but the good news is that such artifact does barely exist with Gears 5 old optimized drivers.

I had this also, it was fine till u drop down the hole and open the door. As soon as i pressed the button u can see the door stops for a split second and when u try n active reload the bar stutters.

Here is a video example of what I’m dealing with 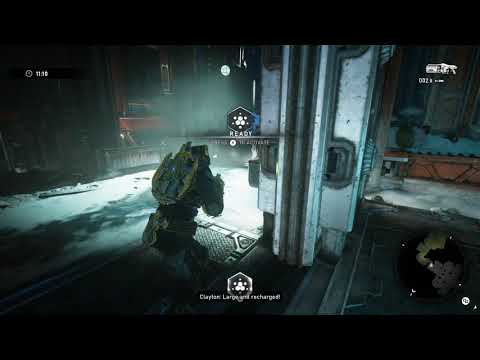 If you guys are dealing with this on other maps that Is very sad.

That video is terrible mate, unplayable. That’s why it was just buffering for me when I was watching it live. It couldn’t keep up with what was happening on your end.
It’s definitely the hive. These new hives are just a mess with the amount enemies spawning.

I haven’t encountered this issue on Gatekeepers. Could be yet another PC issue with Gears? I play on a One X and usually do not have framerate issues except for when there is an excessive number of enemies, tiles or graphical effects(Onslaught Shock Poppers).

Yeah that exactly the issue i had, im on xbox. The host was on pc tho…
U see it lag as soon as u open the door, every 2 seconds or so.

I’ve experienced this type of lag before and it always seems to come with numerous restarts on a hive where Ironman isn’t an option or isn’t being used.

It’s as if the gameplay/framerate benefits from periodically being sent back to the lobby, so the hive has to be rebooted.

i use pc and try score run on this map.

I do it over 4 hours with countless restarts.

No fps drop at all.

I wish I had 4 hours. Regardless, I’m not buying a PC for the sole reason for this one map. Coalition should have to fix their game before I shell out money on something of this nature.

i think xbox x will solve it.

Yeah the PC frame issue I believe is associated with the driver. I’ve gotten it before in versus matches. This issue I think is a different one, probably associated with memory limitations on Xbox One.