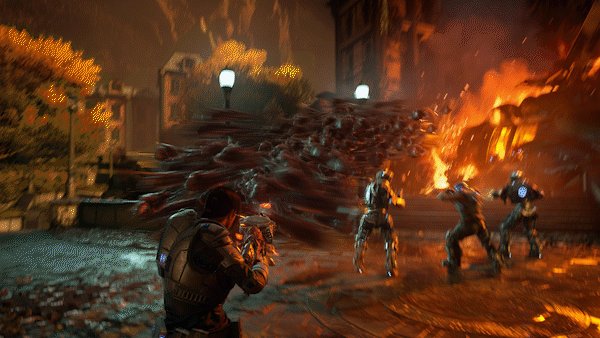 The Swarm Flock - a flying group of Swarm Leeches - will be your worst nightmare. #Gears5 https://t.co/x5DqrtTzvN
PinkPhantomKait (PinkPhantomKait) July 25, 2018, 8:35pm #2

So, Swarm Leeches are just bigger Heart Leeches. Judging by the way it kills the V-Day Gear,

@BChaps Is this a heart leech?

So we’ve seen the swarm leeches on the trailer but did you guys saw what gun kaits using to kill it, it kinda looks like a small enforcer buzzkill thing

They remind me of the face hungers from Alien series.

ok wrote a post on the fb of gears of war and im kinda annoyed… does anyone else hate when too much information is given?. ik they want people to keep their interests but still… not the worst spoiler but id like to experience this ingame for the first time not on… fb

We’re still going to be calling the locust “swarm” ?

After they used the term “locust” in the trailer, I was hoping that we were just going to forget that they were ever called the swarm.

On a positive note, I think the leeches look really cool

Oh, for some reason I thought she was controlling those things. The way they attack the other guys but not her.

What a nightmare. I get one on me and it just cracks open my chest and eats my heart. That’s pretty messed up to be honest.

Will we fight them in Horde?

The name of an enemy, especially one we’ve seen isn’t a spoiler. Not even close.

If they revealed an enemy we haven’t seen yet. Or showed us Marcus dying. Or even the next Carmine…now that’s a spoiler. Naming something we’ve already seen, has a close relation to something from the comics with nearly the same name, and we’ve had a month to look at it. I wouldn’t consider this a spoiler. Just a tid-bit.

[GhostofDelta2]
@BChaps Is this a heart leech?

No Patrick, that is not a heart leech…

i agree it might not be the biggest spoiler but little things add up. im just stating it seems to be a fad to reveal 80% of movies and games through trailers … ive started to not watch trailers for movies because its crazy how much is revealed.

haven’t read the comics. like the lore of the game but haven’t read anything, might get to it one day.