That moment when a Breaker Mace headshot saves your life 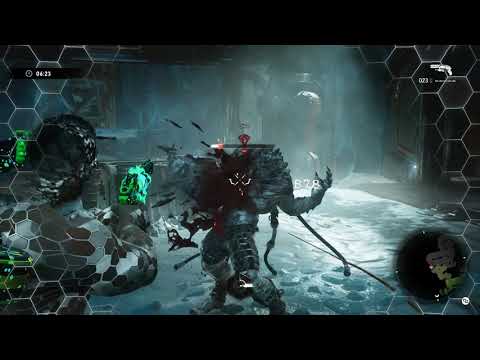 Just wanted to throw that out there. Not that it helps much since it’s uncontrollable but maybe someone can figure out some interesting stuff with it.

EDIT: Also thanks to the weird mechanic of the Mace giving me some kind of dmg. res. in exchange to losing some of its ammo, I survived. Hail to the mace!

It’s inconsistent…having No Idea to this well…just like Striker’s GSD.

I mean Breaker Mace is usually hitting the Ground bypassing the Head even if the Enemy is in front of you, but there’s No way to know either this “Critical Explosive” Card is already broken for many Operations or Breaker Mace can really do Headshot.

Very good stuff in it obviously … but still require high skill and optimal ultimate usage. Ammo savings by meleeing sires to finish them …
I thought you would concentrate your ult at the end to kill the warden first prior to others enemies.

One bullet lost and the run is over.

Good point actually, I even headshot the Drone with it right after with the generic swings.

Yea, that one really was a tough one to complete and required pretty optimal aim (including an order who to kill next).

The idea was to kill the three Drones followed by the Warden but I missed so badly there that I had to start improvising. Luckily I JUST managed to freeze the Warden. Otherwise I’d have chosen a different approach to run back inside, attempting to dodge all these enemies and run outside again just before the gate is completely shut.
I was also hoping that maybe the explosion would do enough damage to at least take off most of the Wardens health if not all of it but yea…

It seems that players can also ‘headshot’ enemies with the basic melee attack(knife).

I remember triggering Marksman’s Explosive Critical Hit quite a few times simply by swinging the knife against Juvies and Leeches.

Yes, with that Card, you can magically Do Melee Headshot easily that other Classes.

Other Classes won’t do Melee Headshot like Marksman do, they don’t have Extra Damage from Headshot.

Not 100% Sure, but I quite sure that “Critical Explosive” on Melee is inconsistent / lead Melee to have misjudgment on Headshot.

I think it’s just due to the swing of your melee. I’ve seen many times where Fahz/Marksman would melee an enemy and cause a headshot explosion.

Yes, but I want to point out it’s just Marksman own “Feature” / Bug…actually…I don’t know well

At least I have melee a Juvie like GSD on Marksman before…but other Classes just stop Juvie attacking from me.

I rather think that the “crit-multiplier” for melee is set to 1, meaning it theoretically does the same damage as a regular hit. This however still checks whether some cards have boni on that and will take effect. Because I also noticed that sometimes Juvies die in two hits instead of three, meaning the + 55% crit damage can kick in as well.

And Grenadier helmets sometimes are also taken off by melee. This game is so random you’d be hard pressed to make sense of any of it.

I’d really love to see the code for this game one day just to make out the possibilities of what else might be broken.

I imagine it’s quite some spaghetti-code if even TC themselves has a hard time fixing stuff and it’s rumored they hardly know it due to the oursourced projects.