From freezing grenadiers , to busted Ai and now these stim drones
His stim is over but his health doesn’t even start going down
@TC_MichaelAOS is everything here ok or a I missing something ? 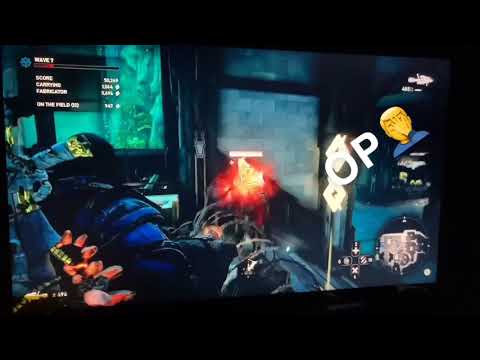 Yeah i remember the last time this mod was on (I think it was Asylum) i was Jack and couldn’t even kill a single DRONE as MULCHER Scion because of that invulnerability they get after loosing the Stim.

I wish OUR Stim would work as busted as this

I’m kidding the Game would be way too easy.

You know Single-shot type of Drones (Grenadiers ect.) are manageable but Stuff like Hammerburst or Claws/Retro Drones are just gaining Stim again before they even loose their invulnerability so they’re almost impossible to Kill as Hijack-Scion no matter what LOL.

Edit: I suppose they’re just trying to get their daily dosage of lead

Start your game and play as usual.
When something cool happens and you want to capture it, press the Xbox button to open the guide, then press the X button to grab the last 30 seconds. To grab a longer stretch (up to the last 2 minutes), press the View button , then choose a duration.

To capture a screenshot instead, open the guide and press the Y button instead of the X button .

And then how do I share that here ?
I already record it off the Xbox dvr

I wish I could do that in vs

Why you gotta be so helpful . Thank you

I was getting so tilted this morning as Kait with this modifier…I would have to unload 4 gnasher shots on drones just to kill them. This is TERRIBLE man, why do they have 1s of iframes after stim but I can lose my stim and be downed by a single boomshot because it has 2 explosive hits???

Yeah it’s so dumb
we get wrecked by booms

Ah yes, I played a match as Jack with this modifier enabled just yesterday, had my card slots all set to things that buff my mind controlled enemies.
I took control of a flame grenadier on wave 10 and was functionally invincible, killed two boom shot scions and a mulcher scion all at once, didn’t need help or to take cover, just stood there burning them till they dropped.

They get stim from this mutator when they are actively shooting their weapon at an enemy, and while enemies are just taking burning damage from the scorcher’s passive, it’s broken as hell.

There you go the official MLG strategies