Before I go any further I should apologize in advance for this small rant and college essay since I know how easily words can be misinterpreted via text.

Full disclosure: I actually enjoy this game BUT let’s be real:

SOFIA should’ve been one of the finals characters added today!.

13 months ago today we were given operation 4 “brothers in arms” with Paduk being introduced as of the characters. Ever since then many people on Twitter/forums etc including myself was expecting that Sofia would eventually be added since it was just common sense but as Bernie would like to say “NOPE!”. What a wasted opportunity. Smh.

You’re forgetting the biggest difference between them, something Valera has the Sofia absolutely can’t compete with. I can play as Valera in 5 today, but not Sofia.

I’m sure you’ll be happy once again, in the near future

I wish writing college or even late high school year essays was this simple.

Jokes aside, I would have much preferred to have Sofia playable instead of Valera in 5, but I can’t say I understand the decision making process in this game anyway. As for Valera, well, I wasn’t really interested in her to begin with and after hearing her lines in the MP I’m even more convinced in not getting her.

Yep lol. It’s what it’s at this point.

I’m chilling. It was just an observation and fair criticism. Definitely happy especially since just need 7 achievements to 100%. Then onto other games while 6 is under development.

As for Valera, well, I wasn’t really interested in her to begin with and after hearing her lines in the MP I’m even more convinced in not getting her. 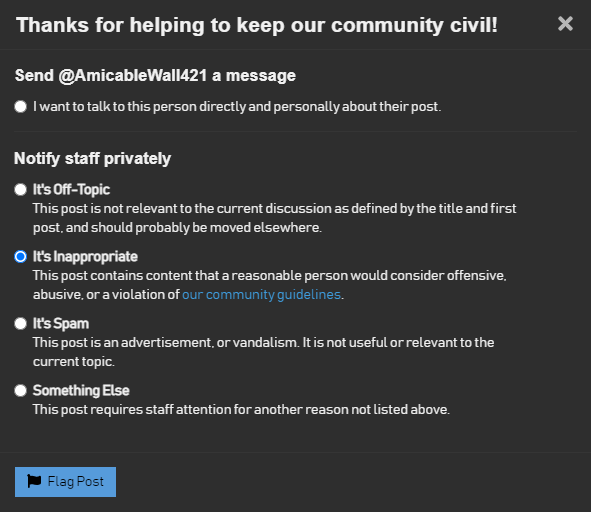 Touché. This is true. @LadyWinterstorm. I had to remind one of my buddies today that Oscar’s VA is different than 4 and that right there pushed her away and my other friends lol. Least he’s in the game. I would’ve loved a Cog Reyna too since we already have two locust versions.

I never said anything about the people that like her now, did I?

But yes, I really don’t find the MP lines for her interesting. Not as bad as Hana or Casan though, so there’s that at least.

I never said anything about the people that like her now, did I?

it’s a joke, I didn’t actually report you

So in what way was I to respond to make it obvious that I understood it was without a lame “I know it’s a joke”?

I’m even more convinced in not getting her.

There won’t be anything better to spend your coins or iron on. May as well just buy up at this point. I don’t understand the point of hoarding in-game currency that will be worthless soon.

I equally personally don’t see much of a reason to spend it so all the excess iron and coins that I have are basically stuck in a limbo state while I’m not really a collector either.

Abit on TC’s part……why did they wait for 8 different OPs to finally add in Oscar (IMO should’ve be available from start) ….it’s kinda of a wasted slot on him

I would definitely buy a chrome steel Sam in an instant though.