So will the Scions never gain their buffing ability?

Scions used to be able to buff their downed soldiers similar to Kantus from Gears 2 and 3. The Scion feature wasn’t brought to 5 because “We forgot,” they said. I don’t have any source to back that up but someone on here said it was mentioned in a QnA/Dev stream once.

Overall I’d just like to see the Kantus return to horde or the revival/buffing of enemies in general. It was a cool mechanic and I think its slept on simply because it wasn’t a huge deal. With the improvement of new enemies in the mix I think it would be a good time to add it.

But it didn’t do anything.

The ability would revive downed enemies and I think heal/make them stronger. It just seems like a missed opportunity that they could modify into something cool. Since it was in Gears of War 4 I imagine it wouldn’t be too rough converting it to 5.

I think heal/make them stronger

See? You think. It could’ve done nothing, you wouldn’t have known. And enemies hardly went down in 4, either.

Alright I know for a fact that it picked them up and healed them but recently someone told me they were also made stronger. there wasn’t enough details on the matter to be sure. Am I the only one who thinks It’s strange to just drop something that was tied to lore without rhythm or reason?

Also Veteran without Retro will down anything in its path.

I don’t see why they can’t port it over to this game from gears 4. Don’t the scions run on the same code?

I’m almost certain they do. I was watching a Gears 4 Horde 1-50 and I seen a Scion do that execution where they grab the player by the head and smash their skull and it looks EXACTLY THE SAME. Absolutely no different what so ever.

Ignore the fact its a speedrun, I was doing quick research (timestamped) 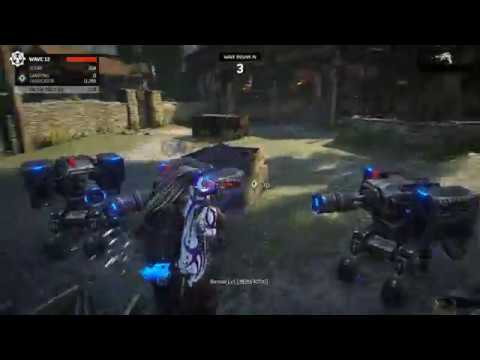 Yeah, everything from an animation perspective - character models, weapons etc, were redone from the ground up for GOW5. They used more advance programs for it with much more advanced, detailed and intricate physics. It’s not a simple port.

But granted, this aspect of lore and gameplay should have been included given that it featured in GOW4.

Well maybe its too late for 5 then but I’d love to see it return in 6. I’m quite the nerd for small details like this and it actually makes these enemies stand out. The Kantus chant is probably what made me adore that creature so much. Very cool and creative enemy.

The Scion feature wasn’t brought to 5 because “We forgot,”

How does that happen?

JD literally says it the first time it’s happening as it’s happening. “It’s making them stronger” and something to the effect of “focus on the him first”. And when the scion is down it literally stops buffing them. Happens several times

That Gfuel is good

They DEFINITELY get a health and damage buff from the Scions in Gears 4 when buffed up, and I have also seen them revive any downs that were around with that same buff.

Case in point, because I played Gears 4s Campaign like way too much, I knew I would be able to always one shot headshot a Drone Elite on Hardcore difficulty with a Longshot, but if a Scion buffed them, they would then suddenly survive the headshot. They would be almost dead, but they still survived it. And they’d also hit harder too.

They ‘forgot’ to add this feature in 5? Incredible.

That takes a particular talent to something that insane. Probably the real reason we didn’t get the real Drone Elites back.

I’m thinking the Kantus will eventually return, which is why they switched to the bastions shielding enemies in 5 to make way for the Kantus. It’d probably look weird to have scions buffing in one game, then Kantus return and do it in the next game, so they probably thought ppl would forget if bastions shielded enemies instead.

Or maybe they just thought bastions shielding enemies that were buffed by scions was too much, so they just dropped the scion buffs.