Has anyone heard anything new on the movie? I take it it’s dead in the water? I can’t find anything online.

It does seem that way.

I wondered this the other day…not a word stated about it.

Something was said at Gears 4 launch and we’ve had nothing since.

It’s probably for the best that is dead.
If it ever comes out, it will most likely be terrible.
Movies based on videogames tend to be bad, if not garbage.

Haven’t you had enough of Batista?

Fair enough he puts in the effort but still…

I don’t want to see any other characters butchered by poor casting.

Things are probably delayed due to COVID-19 and theaters/film production having to shut down. So far, the announced cast is:

Reminds me of a fantastic story from Dennis Hopper (who played Bowser in that film).

According to Hopper, his son asked him why he decided to accept the role of Bowser.

Hopper said to his son “Son, it was so you can have new shoes.”

WTF are you serious?

That’s why they’re in Gears 5.

This article lists only Bautista as interested actor as Marcus Fenix. So far, no other actors have been signed for the movie yet.

No, you’re wrong. That article is from last September. 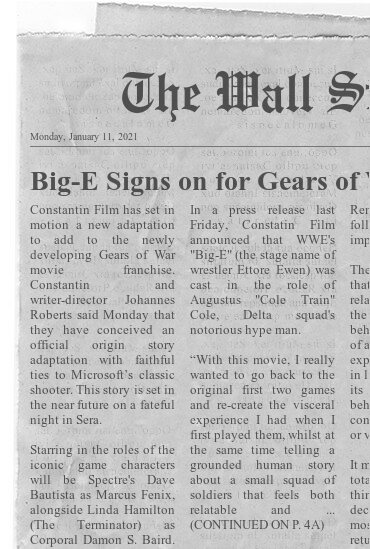 Been wondering the same thing. At this point I think we can bank on it not happening.

So Baird is gonna be female? What?

Lol that would be an amazing cast.

Is he going to yell “Get to the chopper” before his head is taken off by a Sniper because he was too preoccupied with a jammed Lancer to get on?