So if you wanted to know Coalition's response about aim mechanics

When I got home from work last night I turned on Gears 2, went into a private lobby with a guest and replicated the test. Surprisingly, he was accurate in saying older games had the same triangle registry of damage. The bullets worked the same way.

It took me a while to line it up to actually work and get the same result. So although the game fundamentally works the same as the others have… I think they have tweaked it and made it WAY more of a pronounced triangle to drastically reduce the skill gap. I don’t know of anyone who has ever even considered this hit registration issue until Gears 5.

They changed something. And that’s what he should have stated. Instead of condescendingly pointing out what he pointed out, he should have focused on the mechanic, and then stated how they have changed it and why it is now becoming an issue that we are just now noticing.

Lol. Explain this then:

This is not a Kill Cam issue. The guy in the video who kills me even turns towards the left cus even he thinks he missed and has to take a second shot. By the time he shoots im not even on the screen anymore - you can also see this outside of the Kill Cam from my preview, where my character is literally next to his.

The Kill Cam is supposed to show the server’s view. That’s the only thing your video demonstrates, and it would be fine if it was only a few millimeters off (like in your video) but completely off screen is a joke. Also, aim-assist is definitely more intrusive in Gears 5, especially on precision weaponry, which just so happens to be your weapon of choice for the video demonstration.

It’s a kill cam issue insofar as the kill cam provides no reliable indication of what your opponent did or saw. Thus, we don’t really know what happened. Any inference you want to draw that you were not on his screen when he fired is pure speculation.

So the question is, why not sort out the camera out in ADS then. The problem seems to arrive when you ad the camera to the barrel shooting as they are not the same thing.

And this brings to mind why in the name of holy hell have not dealt with problem at all.

It feels like they want the over the shoulder shooting but at the price of all the bugs it brings,

It now makes sense why in gears 3 the hammerbusrt was straight ADS.

Oh yeah…nothing at all wrong with this happening all the time. It’s just a “kill cam issue” so we should all accept it, huh?

Like I said before, the Kill Cam shows the server’s view. That’s why it will not appear the same as it will to the killer’s view. - This is due to the lag compensation.

However, in my video the T-800 is stunned by a flash grenade, he cannot shoot until that timer is over, I roll almost simultaneously after killing the other Swarm, while the T-800 is still stunned. But the clip shows he still somehow got a complete Gnasher shot on me and gets an instant kill?! There is literally no way he should have landed a full shot, if he should have even landed anything at all.

Furthermore, there should be no “Gun Triangle” issue as i am on the left side of the T-800s Gnasher. And not forgetting what I said previously - The T-800 even turns towards the left, fully expecting to have to take a second shot, the dude even looks confused.

You along with TC can play it off as much as you want. But this sort of situation has been really common throughout mine and other’s Gears 5 experiences. It is not acceptable that this and many other kinds of issues have been happening, especially in the seventh game of the Gears franchise. - Something here is broken and it needs to be fixed.

FYI - he’s the video on aim-assist for Gears 4 Gnasher. This is why me and others feel like TC changed the aim-assist in Gears 5 and it’s causing issues. 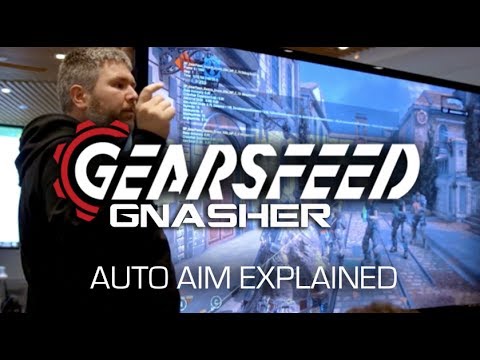