Continuing to put in hundreds of hours a month to support the game, trying to help.

I know the feeling.

Also, this ones frustrating 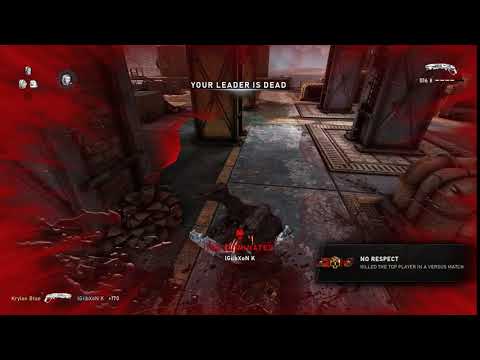 Every single person ive tried to get intp gears immediately notices what you describe in your video and never touches the game again.

Its not a new issue and never once have they addressed it and until they do so people will try the game, shoot someone 3/4 times, die, then turn it off never to play again.

Nice video Zii, I always appreciate the detail you go into.

I have been breaking down a lot of my recent clips and have noticed a consistent factor. Nearly all of the deaths that have be scratching my head can easily be explained by either my character or the enemies character not being where the they appear on the server or my screen.

It sucks to simply point back at latency, but really the proof is there. I have seen countless clips shared here of people getting killed by enemies not even looking at them, however nearly every single one of those clips the enemy is looking at where the player JUST was. This insinuates that despite the fact that on their screen they have already turned a corner, the server never saw them make it there. The biggest mystery around all of this is that these strange occurrences DO NOT seem to be influence by the ping of the two players involved and are seemingly random. Almost as if there was a hiccup on the server.

I know many will say “kill cams are not reliable”, but I feel they shine some additional light on this. I have noticed a lot lately where I will be running towards an enemy and they gib me from way out of gib range. However, upon watching the kill cam, I was MUCH closer to them on their screen/server screen then they were on mine. I have no idea how players are meant to adapt with such disparities in what players are seeing.

I know many will say “kill cams are not reliable”, but I feel they shine some additional light on this

This is somthing i still cannot wrap my head around. The server is ultimately responsible for determining when something is a kill. The kill cam is allegedly replaying what the server observed.

How can this not be reliable unless your serverside code is also not reliable OR the kill cam ISNT replaying what the server saw.

Exactly, I know how Gears “works” so put up with the issues because I understand whats going on behind the scenes to some degree. Like how a shoulder flip can alter the angle and allow you to miss or shoot a wall you are aiming past. New players go “what I wasn’t aimed there” and just quit. Its really a massive issue that turns people away

I think the biggest reason is that what happened to you is being recreated with the kill cam, and not replayed to you. The kill came is essentially a bot that is reenacting your enemies actions. Which is why we see some weird movements in them.

At least this is what I have been told.

Except that emote near the end

Add in lag, and you have a real show.

I feel the pain on staying red. I’m not sure why sometimes it feels like regen isn’t working.

Maybe a shot pellet from somewhere.

4:16 - Seeing that Myrrah had me seething because I’ve witnessed that far too much in every damn Gears.

Every single person ive tried to get intp gears immediately notices what you describe in your video and never touches the game again.

Moments like these kept me from leaving my PvE bubble in Gears for years.

Good video.
None of it seemed much different than what I experience constantly and there is definately something screwy about what is going on under the hood.

Even when everyone has a very close, low ping. we are talking sub 10ms in “TC ping”, odd visually incorrect stuff goes on. At that sort of ping range the differences should be what 20 frames?
But for some reason people are often looking away, too far away, doing another actions/things that take more than X frames to complete and still gib you.
It is beyond infuritating and gives me little incentive to try and get better.

I think the reason that they appear to do this is not only due to poor lag comp, but also due to incredibly bad prediction software.
I mean look and the pics krylon posted. The opponent isn’t firing at the post where he is. He hasn’t moved from the post to get to a place where the guy could kill him, yet he is dead without ever moving. This says to me that what ever prediciton the server came up with to show on krylons screen was wrong.
As what he is seeing shows an impossible death. If the other guy is not even close to there and has hit the piller and wrap shotted either way, then it would make sense, Or if krylon had pushed out from the post and slid to the box. But that is completely diffrent from what is actually on screen and from what he appears to have done.

Which leads to my other issue with the screen diffrence/wonky prediction.
There is a system that TC have hinted at before that is weighted to trust the higher pingers screen over the lower pingers. So the person with the worse connection can trump what is shown on the low ping players screen.
This system is effing madness.
If I can’t rely on what happened on my screen being correct then how can I be expected to actually fight people? If I hit a shot on my screen, the opponent shouldn’t be able to just say “nah mate im over here actually, so you missed on my screen”. Yet ignore when my system says that. It is so illogical it hurts.

When you start adding togther the screen differences, the often wrong predicition system, the high ping weighted system and more. It becomes easy to see why gears plays so haphazardly and as someone has already said, to see why lots of new players see this or feel this as soon as they play for more than five mintues. Then laugh about how broken it is and never come back.

It is ironic that the gamepass stuff has probably put off more players than it has gained.
Those guys have not invested money into the game and have no qualms about dropping something that just looks and feels this messed up all the time.

On a side note @Z_i_i have you seen the glitch where it looks like a shot not happening, but there seems to be frames missing from the gnashers muzzle flare, specifically the big flash in the middle?
Going through my videos it covers a good 20% of my ghost shots and I swear to god it is messing the shot timing up very slightly leading to some close misses.

Great video content calming explaining some of the main issues that infuriate the community.

Hopefully this will be noted at TC and will be used to move Gaers 5 forward into a better direction.

Reminds me of those extremely sweaty KOTH matches where the first round is neck and neck, but the second round something happens and one team pulls ahead in leaps and bounds and starts utterly obliterating everything. Some times thats my team, other times the enemy team.
Third round is usually tit for tat again.

I often wonder, how much of this is me vs my team vs the game just arbitrarily deciding its going to inject some EA ™ fair play?

Assuming Gears 5 is running on 60Hz servers, it’s surprising to me that there is so much desync happening. You’ll usually see bits of this in modern shooters since most implement some form of client side prediction, but it’s absurdly noticeable in Gears 5. Reminds me of the desync I used to experience in PUBG

Wasn’t the reasoning to use 60hz servers to improve the quality of play? I don’t see any improvements at all over Gears 4 and that game has faster movement and half the tick rate.

That’s a concern and something many of us would like an answer to. Whether we get an answer or solution is yet to be seen.

Lmao. This is all so true, online is broken and they don’t care to even fix it. All anyone can say is get better haha funny. Today some guy downed me in two bursts from hammerbust 6 bullets. And in the kill cam he shot my waist not even a critical shot. How can I enjoy this game when it is so one sided. Straight garbage of a game.

The tick rate is only half the battle. How they’re utilizing updates to the clients and how they handle lag compensation matters just as much, if not more. In general, you should see some benefit from faster servers, but results may vary from game to game

But it feels like a step backwards from Gears 4 which in itself was far from perfect. I would expect slower movement and faster tick rates to provide a better experience. Granted, it depends what they’re doing to process all this information but that’s why I was curious. What are they doing wrong and how do they fix it is the one thing all of us are waiting on. Whether we get that answer is unknown but I’m leaning towards highly unlikely.