I don’t have a major issue with the new system, but I do have some minors. FFA is fine for the most part, my points are mainly with KotH in mind. Some have been said above, but regardless:

Other than the above, I don’t have a problem.

I want to see the true point score in a ranked match. It’s frustrating when I’m behind someone who has 1 more break than me despite me having 25 more eliminations. Don’t mind there being a point cap but please show true scores. I want to see who are the best performers.

On a slightly different note, I also feel like the new ranking system is too heavily weighted to winning and not individual performance. Appreciate that we, the community, has been crying out for this but its frustrating going into a game solo stacking and it being a coin flip. Perhaps lifting the point cap would alleviate this issue.

I agree with your first point. At the higher ranks, it’s going to be harder to fill out lobbies in a timely manner, so it makes sense to shrink the amount in game. And a reduction of players would be nice in order to have some breathing room. But I can also see an argument for managing flanks being just part of the experience.

Regarding your second point, How many Snipes/Torques would you have available for pickup? Just one? My personal opinion is that if power weapons are going to removed, they all should. I’m not a big fan of power weapons in the mode since if you get an unlucky spawn, you can be right in front of someone who just picked up Boom or Incendiaries.

To me, free for all is at its best when it is 99% about shotgun play.

I think that removing DBNO from Free for all could help improve the game play.

Agree. GOWJ FFA had this and it worked just fine.

Working on it! There were a lot of threads, and while I’d love to sit here and chase every one down, a little help and poke here and there is also appreciated

the ranking system is brand new and a work in progress so I’m not mad that it isnt perfect yet. Glad you’re acknowledging it. But what about the numerous other threads about the other issues that this update has caused? Will you be acknowledging those?

If they are bugs - they need to be sent to support.gearsofwar.com
Otherwise, if I’m missing feedback threads, direct me to them (can do so privately if need be), and continue the discussions here.

I found two more. They look like they’re about the new ranking system to me.

Hey, Just so TC know there is constant glitch with eliminations once hit 40 where can’t earn gp for them anymore, Secondly I have a suggestion make downs and revives give you points one for down max 30 two if confirmed as kill, make ring and breaks 2 each and revives one max 10 this way it’d make grinding at top elo more consistent and wouldn’t lose as much gp if was onyx and lost but played well . Thank you for your time Warm regards Oliver Whitehead

and here i thot the old system was bad. now theres a premium on kill stealing cuz u get full points for it. and this cap on points earned makes no sense in koth after 40 kills u stop getting points? u can get that in the first round. and everyone gets points now even the losing team like sweet cue the oprah meme everybody gets points. this game is total garbage and everytime they try to “fix” it they just make it worse. guess ill find a new game to play

The cap limit on Caps n KoTH are too low. Elims inflate GPS as well. Kills and assists should be game. Get rid of elims period.

I made a feedback thread some time ago. I’m having trouble copy-pasting the text on my phone because it’s so clumsy, so I’ll just link it here

So after playing quite a bit now it’s become clearer to me what’s good about the new ranking system and what are the flaws. I’ll start off by saying that the system as a whole is very good in the sense that it’s easy to follow your progress and it’s clear why you’re moving up or down in rank. Plus, because of the buy-in cost you are punished automatically for quitting. So I wouldn’t do anything about the “framework”. However, there should be some adjustments. Especially concerning elimination…

The GP score doesn’t need to be displayed constantly as it’s already on the scoreboard, it’s a nuisance and just in the way.

Eliminations need to go. Eliminations are worth two points and it’s deems the whole GP system inaccurate when it’s entirely possible that at least 3 people can be awarded those points by simply putting very little bullets into the kill. The game should return to the traditional ways of “Kills”, now more than ever. This alone would separate the chaff from the wheat on the scoreboard.

That’s kinda the point though, getting the basic requirements of the GP score is the easy part, getting the win is the hard one. TC like made Cap/Elim requirement low so that way just being competent throughout a match and winning was enough for them, and besides if it were entirely kill focused would just mean kill stealing would go way up.

Because of this system, combined with Eliminations, MVP is now randomly awarded if all the top players have “maxed out” their points. This is clearly wrong and defeats the whole point of the award.

Yeah its stupid as hell when you have twice as many elims as the 2nd place player but they have the same score as you, not necessarily a ranking system problem but moreso annoying from a bragging rights perspective, will the real MVP’s please stand up?

Quitters can be an issue as strength in numbers, however incompetent they are individually, will normally triumph in KotH. A compensation would be to gradually decrease the amount of winning points as more people quit. Yes, this could probably be abused as people could all leave at once but that would be rare. Having this would still make it much more bearable fighting a 2/3v5 knowing that their win won’t be as rewarding and your effort will not be in vain.

Once one person leaves the likelihood of more people leaving is high, so I just see this backfiring more often than not.

I thought HB was still on the map? kinda wish they put flashbangs up there honestly… map needs weapons that reduce camping as much as possible. Dropshot was an interesting idea, improved the map somewhat.

I did some more digging and didn’t see these linked, though they may contain useful information :

That seems to be all I could find specifically or mainly relating to the rank system and nothing else with the forum search tool.

Saw something I think is, well, dumb.

Ranked KOTH: At the end of the match, 3 people on the winning team (including me) had maxed out our GP and tied with 100. While I appreciate getting MVP, I shouldn’t have gotten it. One of my teammate had more eliminations, more caps, AND more breaks. I think I got MVP because I reached 100 GP about 15 seconds before we won the match. If anything the MVP should have been the one who maxed out first or who would have had the most GP if there wasn’t a max.

bots keep jamming near the flag on gridiron, cyrcling on one spot or just stand still

Thank you for linking this, this was my idea.

I had a few people not fully understanding what I meant so I included it in a feedback video if you’re interested. Might be quicker than reading the post.

I tried to consider a number of factors that I know can frustrate players, whilst trying to keep it in a way that I believe to be balanced.

Can’t find a match of ranked gridiron.
Might need to give up playing this game if the matchmaking isn’t fixed soon. Such a waste of time searching for games. 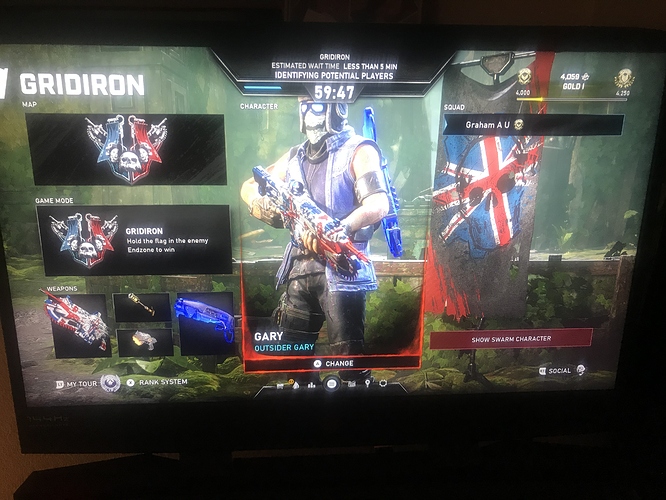 If you don’t find a game in the first 5 minutes, restart matchmaking…

Add true rank/true LEADERBOARDS. Something similar to Gears of War. (Including actual placement per mode, actual kills per weapon, etc.) And make it globally public. Please. Also make the “tier” rank individualized instead of team dependency.

Well, after disabling the on-screen rivatuner the crashing of the game was gone, but it still just took me out of a game with the message that the connection to the server was lost.
And since didn’t find a game to return to, I set out to find another one but this garbage sends this message:

16 hour penalty for something that’s NOT MY FAULT?
Why is this crap suspending me so long?