I don’t wish to be forced into a having a moan, but ranked matches are a complete farce in the UK and this remains so over a month from launch. High latency is a fundamental game-breaking issue that has been reported by myriad gamers.

What is being done to fix this ?
What is the schedule for a resolution ?
Do you even acknowledge that this is a fundemental problem ?

I’m playing in peak UK times between around 7 PM BST and midnight BST, Once, and once only in all my escalation matches since the past weekend (roughly 20) has my ping been a UK ping and the rest of the time it has been 90 ms +. I think I’ve managed to win just twice.

I write software professionally have done so since the early 90s. I do find it inconceivable, I really do, that anyone could take a sorted container, by ping connection times, secondary sorted by ranking, with a wait time weighting, and fail to pull out the top 10 from the list! Ok ok I know there are many other factors, my point is this isn’t complex; it should not be broken. It’s something that every other online game I’ve ever played manages fine, going back to the grand-daddy Quake in '96. Or maybe you are forcing UK players to get spanked by Mexicans on a mid-west server because the player base has already fled ? This happened in Gears 4 as I’m sure you recall.

Hint: Waiting 3 minutes for ping of 30-50mS excellent! Wait for 5 minutes… ok, let’s have a match even if it’s going to be a bit poo. Connecting me to Mexicans in 30 seconds ? No thanks.

Last time I regularly played with a ping of over 100 mS was back in '97 with a K56Flex modem and a ping of 120. Glad to see that 22 years on a premium AAA title has done its best to make sure nothing has changed. It’s LPB’s vs Modemers all over again, that’s what you’ve created.

Personally I would like to see this fixed. I would like to play some decent quality matches. I am fairly good, but not oustanding; Gears 4 tells me Gold 3 / Onyx 1. Barely keeping a hold on Silver 1 at the moment. As it stands, I will just have to grind out my 10 wins to finish the medals in the tour and hope to never play it again.

Known issue. EU servers are to be addressed. No time frame given, though sadly.

This is the problem I have also, I am no vs player and don’t like escalation but just trying to win one game seems like a task in itself, now though you either put up with it or get banned for quitting and trying a bit later.

Yes, it’s absolutely ridiculous that this isn’t fixed yet

People were speculating on Reddit it was down to initial lower populations on US servers. They were moving a majority of EU players over to compensate.

I doubt it’d be true though personally.

I’m based in US east coast. I have tried to play a couple of times during my earlymorning hours and must have ended up on EU servers. Ping for every player ranges from 150-200ms. If you gnasher gib someone it’s delayed by 1.5 seconds. Thankfully during my peak hours this does not happen - but I certainly can feel your pain.

Ok. I downloaded the patch. I have played one game this evening, here is a screenshot of the absolutely appaling pings of my team: 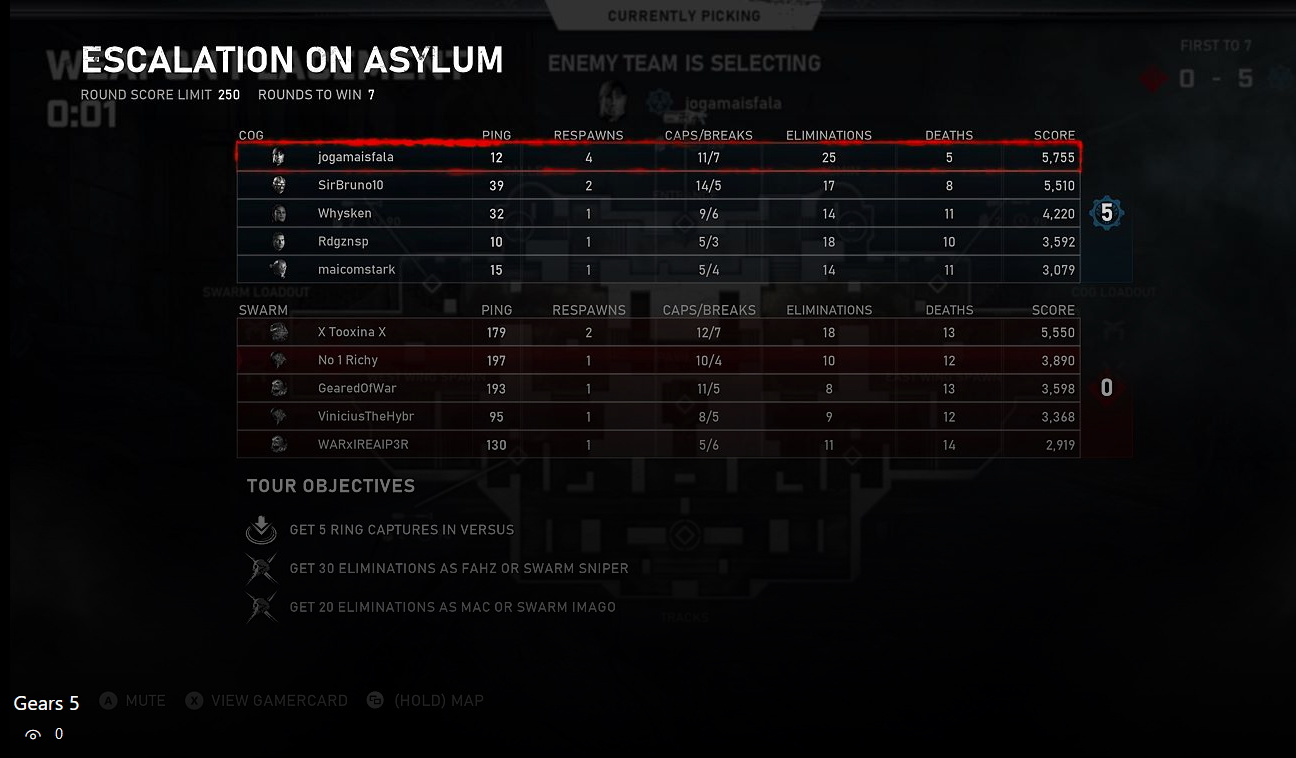 Not withstanding my requests in the original post, I would dearly love to hear you justify this. Are you not embarrased by this ? Frankly, if I wrote this kind of code I’d be appalled with myself.

(PS, I can also post screenshots of round 1, round 7 incase there is any doubt etc etc)

Sadly the solution isn’t one that will lead consumers to spend iron. Therefore it isn’t really of importance to TC. I imagine the numbers have been crunched, and the lost revenue of UK/EU players who will quit over this is being planned for in future cash grabs.

Given the state of this game, TC’s handling of it thus far, and that numerous in-game systems are designed with MTs in mind, it likely isn’t far from the truth.

90 ms aint even bad. but if u can go to a closer server then that would be great. due to lag spikes in my home network due to overflow of users i have to use my cellphone data to play gears and i get 120 - 157 ping, i dont really like anything over 140 but in my case its still playable. so that being said some of the pings that u are seeing may be the best possible ping for that player and theres not much u can do about that. however i wish there was a way to toggle what servers u play on. or at least disable what servers u dont want to be on.

It’s because if the brexit.