Ranked is a Disgrace

The matchmaking for ranked isn’t even matchmaking they put Dimond ranked with gold makes no sense and if you win they put you with garbage teams immediately also if someone quits we get penalised for it I’ve been de ranked twice now because of some dumb f**k has decided to quit the match before its started and booted us all really is that fare? I honestly think ranked should be looked into a hell of alot more than it has been 100% shameful and disgraceful.

You have to get good. 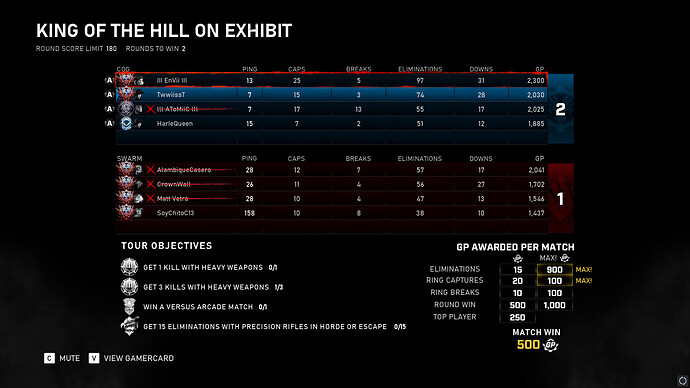 It is what it is. With the current rank system, rank doesn’t mean anything. If you play regularly and are below Masters with this new system…you need to work on your game and stop worrying about the randoms you get paired up with.

My main issue is the fact that if someone quits and you don’t get in the match it brings the rank back down dumb and pointless and I actually play with a friend as well.

It’s difficult for rank to mean much other than trying to get you into better matches in an online environment. Especially in Gears where connections vary so much. I played a FFA match where this player with a 191ms ping was going back and fourth with me all match until he hit 20 kills (I had 21 at the time). At this moment his ping dropped to 79ms and never went higher and he couldn’t buy a kill if he tried.

Overall connection quality is definitely a strange thing in this game. While it’s true any online game can suffer from inconsistencies due to varying connections it’s also true Gears seems to be more impacted by them. Until they figure this out there is no way I can consider Ranked to be anything but an attempt (a failed one at that) to match players better.

I 100% agree with you there my friend