Proof ranked koth is unfair and. A broken system

This post was flagged by the community and is temporarily hidden.

I don’t play that much since it’s a pre-season, but stacks against solos is a norm matter

Well the ranks are how they are because, in case you missed it, they just did a change were you can get matched up with people 2 ranks above or below you, that’s to help with match queue times being far too long at higher ranks. That should be getting fixed in the near future.

As for stacks, until they make it solo/duos, that’s just how it is. People use every means they have to win, and stacking is the best bet. However, they are releasing TDM as a solo/duo only game mode, so you might find that a bit refreshing. I know it might not be as fun as KOTH, but it will be a lot less frustrating at the very least.

In regards to quitting, you literally can’t quit ranked games through the in-game menu. There is no leave game option. The only way to quit is to completely close out the game, aka dash boarding or closing the application on PC, and you can’t prevent people from doing this. TC can implement harsher penalties for leaving, but they can’t do anything about the actual act of leaving. You just have to put up with it.

Hope this answered your questions, and hopefully you continue to stick around. It’s easy to get blinded by rage. I think you’ll have a much better time when tdm gets re-released into ranked. Ciao

yes this suck but now that they go 2 up from the highest rank on the other team it really sucks for silver. I should have to play no higher that onyx, but in solo if i get golds and lets say its 3 of them we could be facing 3 diamonds. its not like the find equally lower ranks.

you can see quick even with you diamond and congrats. your team was 50% less. it also looks like you where also stuck as a solo with a 4 stack. the other team are C allies so I am sure thay please alot together.

soory I get this all the time they always ploace low ranks with high ranks its an up hill battle for those of us that are not as good as you at diamind… you may have as well be playing 5 diamonds .

I have freinds at onyx 3 and diamond alwasys whating me to play. Its great and they are cool about my silver, but i take a pounding. plus i get hunted once they figure it out. and if i manage to have a good 1 v 2 and win its not like i get extra for killing a diamond player.

It’s not "normal_ and it’s certainly not funny. It’s a broken ranked system. Just like OP said. Broken. Diamond players should not have to play with, or against, gold players. The ranked system is supposed to separate players based on skill. Correct? Then why reward terrible players for weak elims? Why make people pay ,170 gp for a match , only to be teamed up with terrible players who didn’t have to pay near as much to get into the same match…hmmmmmm. broken.
I’d like to edit this. Good SOLO KOTH players will likely have to settle for onyx/diamond. I am ready to see the KOTH gp change tomorrow.

It is normal and it’s funny since there is a fully ranked topic since Gears 4 about it being unfair and the same tier should play against each other. Don’t blame me! Blame the ranked system for being like that long long time ago.

Bro you mean two ranks higher than my teammates they are fkin scrubs every game… P.s. you are very wrong if i press the start button in a ranked match they give you a option to quit!! Idk about pc but on xbox it gives you the option to quit to main menu

Yeah they said 2 ranks higher or lower than your rank. I guess I didn’t make that clear.

They do? I know they removed that feature in GOW4, I guess they added it back in. Still though, they’d dashboard if it was removed anyways. There’s nothing you can do to prevent quitters, only ways to punish them for doing so. Hopefully TC get on with their new punishment system they’ve been talking about

Well the ranks are how they are because, in case you missed it, they just did a change were you can get matched up with people 2 ranks above or below you, that’s to help with match queue times being far too long at higher ranks. That should be getting fixed in the near future.

matchmaking rules are not clear,
I have not seen something comparable to the old matchmaking system (yet I may still be mistaken) where teams had with similar scores would get matched

stacking is the best bet.

the old score system was way deeper than this one
your performance was measured in multiple ways according to the action you took to trigger a score value
downs had their value, headshots and partial damage as well
right now it’s mashed into 3 items that don’t represent a player’s value

Not sure how your games are going, but TC have literally came out and said that the new ranking system originally only allowed for you to be paired up with people your rank, one rank above you, or one rank below. They would not allow for anything otherwise. Now however, because queue times can be very long, they just did a fix like last week or so, and now you can get matched with people who are 2 ranks below or above you. I was only using this to explain why the OP had 1 or 2 golds on his team, as opposed to the normal diamond and onyx only.

FTR quitting in Ranked already isn’t “an option”. It’s not in the pause menu like social… quitters quit by quitting the entire game, so they could never “stop” that…merely do incentives/boundaries in-game that make them do it less, which is something they’re doing for Op 5 but none the less.

I been getting stacked with the same kind of people myself. But its been an ongoing problem since the first Gears of War. 90 percent of the time you get that 1 guy that has to ruin it for everyone. I even had a bum on my team that went into a KOTH match while he was cooking breakfast. We were winning in the beginning. Then thanks to that one guy that decided it was a good idea to make bacon and eggs or whatever he was making for food. We couldn’t do anything being a man down. He would play for 40 seconds and go AFK 5 minutes at a time. Team called him out on it. And he was just acting like a ■■■■■■■■■. Hopefully by reporting people that ruin the game it does something to make the chances lower for playing g with them.

they didn’t release how the mm process works, now
in the past they said they put people together and matched against another team of similar rank score
I’m assuming there’s something similar behind this new ranking system as everyone still has a score in their current rank
from my pov I’ve seen a lot of unbalanced teams but I might be biased

Just by looking at the screenshot I can see you don’t cap much and go for kills. Your whole team barely had any caps besides the guy in the bottom of your team. Winning takes an effort from your whole team. 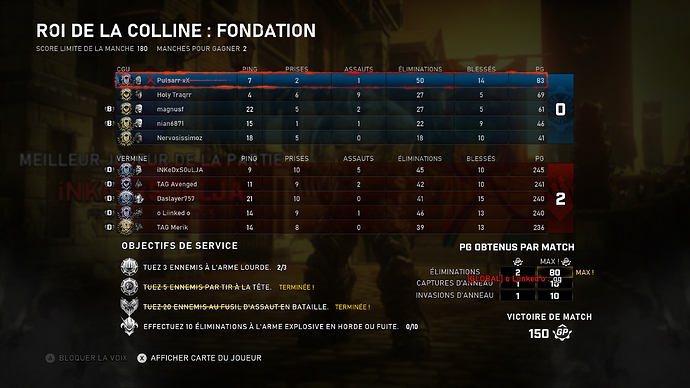 TC lowered and raise the matchmaking perimeter because the higher up you are they can’t find a match. It’s preseason nothing counts so if you don’t like the matchmaking just don’t play. The perimeter will be adjusted back for regular season.

The gold are in your match because that Onyx brought them in the match. I rolled with a silver yesterday in a diamond lobby because I brought him with me. That silver is actually a master. He just doesn’t play much to rank up.
Matchmaking been working actually good for me solo queue. Stacks here and there but if the perimeter looks funny it’s always because a higher rank partied up with a lower rank.

Play with some friends or inv people to your game? Instead of playing alone? Team work makes dream work.