Please don't be this type of engineer

I’ve had experienced bad engineering before, but this was hilariously bad. I just had to laugh at it. I mean the guy was re-up 21 to

Only build one locker and spammed the hell out of the sentrys everyone on the map. I mean in this video it was only wave 25, it got even worse as the wave progressed.

Kait requested to engineer to build more lockers instead he constantly builded more sentrys and put it in front of the barriers. Felt sorry for Kait to, the sentrys were in the way. 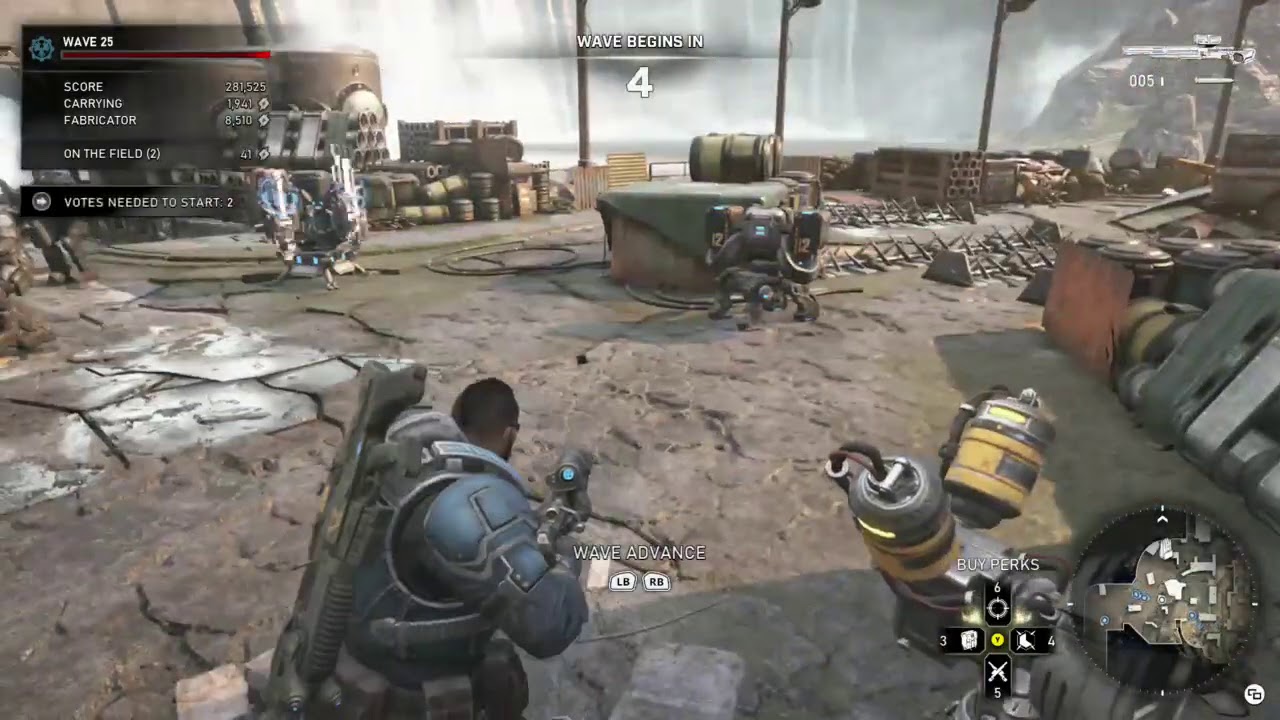 Re-ups mean ZERO in this game. I bet the guy wanted all the kills so he can keep getting ribbons to level up, hence his high re-up and he wants to get the achievements. Also, it’s his style of play man. Was it his game or no?

Was it his game or no?

My bad, I left that part out. Yes he was the host

Yeah see, there you go. Can’t do nothing about it but to leave or stay and get whatever XP in the end. Me personally, I would buy some sentries too but not like how I did in 4 since I was a SR and a few maps where done in an hour.

I hope a Matriarch or Swarmak came charging in to cause a good and needed wrecking to show this engineer the foolishness of his ways.

I know what they say about assumptions, but this looks and sounds a lot like your typical Gears 4 sentry spammer where they would actually get away with this stuff, so maybe this guy is one.

I stayed throughout the game

. I mean I might as well, since I was the sniper… But like I said, I did felt sorry for Kait. She did end up leaving the game on wave 30 odd.

This will be an ongoing issue with Horde for as long as it exists. You simply can’t please everyone in the game.No offense to you but If stuff like this bothers players, simply start your own Horde match and don’t join other peoples games. I don’t understand what is so hard about that. Also, if it happens during your own game, then boot the guy. No harm no foul.

I sat in my lobby for at least 30 mins and no one showed up, hence, why I had to join this type of moron in the game.

I 100% agree bro. Trust me, if that engineer was in my game he wouldn’t have lasted long, he would’ve got the boot. Like you said bro, you can’t please everyone in the game. But there is nothing I can do when you are playing with this dodgy engineer who happens to be the host in the game.

Very understandable man. I legit never join a random game. It’s either I play with my friends @ll_R_E_D_l @Lambent_Lail @Slipping_Flames and a few others but if they don’t message me to play, I am perfectly fine with not playing Gears at all.

Then I would consider you to be very lucky that you have good team that knows what they are doing. Unfortunately, for me I have to rely on these dodgy randoms and that’s what I get for playing solo

Yeah we’ve all been there, pretty much gotta go with the flow.

I hope a Matriarch or Swarmak came charging in to cause a good and needed wrecking to show this engineer the foolishness of his ways.

As much as I wanted that to happen in the game. Unfortunately, it never happened.

Or this Type… oh my bad it’s pretty much the same isn’t it?

This is why I only play jack ,due to Engineer in that video wanting more turrets(kills), The rest of the team getting hardly any kills,but I’ve seen this over/over again In horde 50 waves .I do deposit all my light to help engineers,but they should show some respect to his/her teammates who help towards the fortifications

It used to be like that in Gears of War 4. Decoys, Some barriers to slow down enemies, and sentries everywhere. Engineers would get most of the kills and XP. I’ve noticed how it has changed in gears 5, with engineers building barriers and lockers and a few sentries in the back just for emergencies. It kind of made the engineer role a bit boring.

I know this isn’t sentry spamming, but I knew everything was gonna go south once I saw this

Ohh the irony… just wants a constant supply of energy from his fellow teammates to selfishly build sentries to get all the kills.

I bet the engineer must have spammed ‘Deposit’ in the chat after every wave to build more sentries.

I would like to know if a Del using Overload (Fort over 50% HP does +40% Dmg) would be effective on both Shock and MG Sentries. If they aren’t, then nice to know. Just something I haven’t gotten around to trying out.