Trailer | Characters | New Map | PvP | PvE | Tour of Duty  Hello everyone! The time has come to talk about Operation 7! This post will cover everything you can expect to see when the operation goes live on Tuesday,...

The time has come to talk about Operation 7! This post will cover everything you can expect to see when the operation goes live on Tuesday, May 18th.

Before you dive into the full post, check out the Operation 7 trailer! 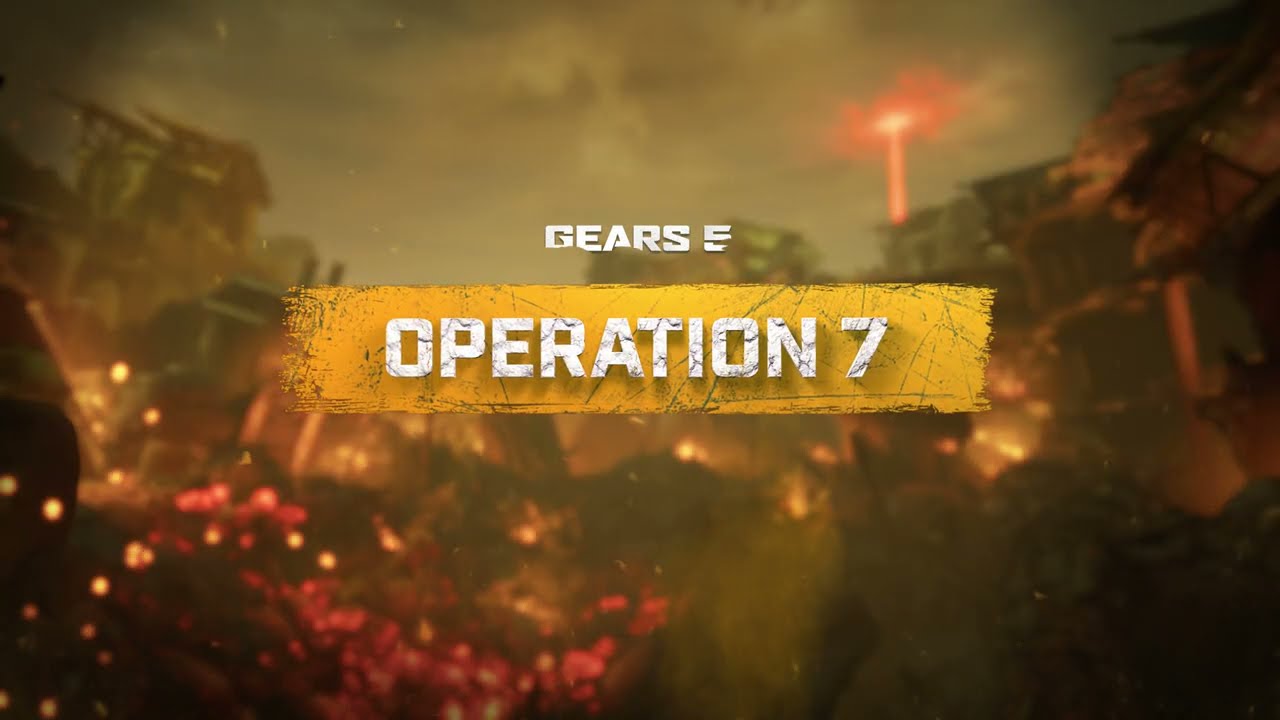 Holding advanced degrees in biochemistry, toxicology and chemistry, Hana Cole is a gifted scientist who takes an unconventional approach to solving problems. Joining Colonel Hoffman in his fight against the Swarm, Hana’s technological innovations are the secret behind Scorpio Squad’s ability to destroy enemy hives from within.

The monster who creates monsters, Locust scientist Ukkon is responsible for genetically engineering many of the creatures that terrorized the people of Sera after E-day. In the early years of the Locust War, he also used Imulsion to create a new breed of biological horrors.

The burning remains of the once-prestigious Estemont Hotel serve as the focal point of this Ephyra city block. Controlling the hotel is key, but numerous points of entry give ample opportunity to counterattack.

Competitive is our updated ranked system for Gears 5, bringing leaderboards, more modes to compete in and more.

Gear Points have now been removed and we use a total points system for each playlist. The higher your total points, the better you have been performing. Reaching certain milestones in the leaderboards also grants special rewards, so check the section below for information on that.

The flexibility of Competitive will mean we can add more modes over the course of the Operation. In the next two weeks, we’ll be adding Execution 2.0 and Escalation.

With each mode having a leaderboard, we will shift to a placement system for each playlist. This leaderboard is seasonal which means they will reset at the start of each Operation.

Oh… and of course you can filter the leaderboard to compare yourself to your friends to see how you are faring against them!

In addition to all of this, you are also able to view each individual player’s leaderboard stats and filter them by week/seasonal/lifetime!

A little more on those rewards!


And that is not all, if you finish in the top 1,000 players in any of our Competitive playlists, at the end of a season, you will receive an exclusive Heroic weapon skin reward. Check out the full reward list below!

In Operation 7 the Heroic weapon set you can earn is called Heroic Obsidian, which can be earned if you are in the top 1000 players in one of the competitive playlists at the end of the season, check below for a preview of it!

One last bit of exciting news to mention about leaderboards is that alongside the seasonal leaderboards, we will also be adding an all-time leaderboard for each mode, this will persist across Gears 5 forever, meaning the top spot is always in play!

Back in November 2020, we introduced unique mutators to the Gears 5 campaign as part of the Xbox Series X|S update. We’ve seen how well these were received, and we are happy to announce we are bringing some of these over to Operation 7- Drop 1 for use in your Versus custom matches!

Alongside the mutators, we have also added the ability to weapon swap the following weapons in Custom Versus:

We are so excited to see what custom variants you can produce! Look out for versus event playlists from us in the future featuring some of these mutators.

Also coming in Operation 7 Drop 1 will be the ability to gain multiplayer progression while playing through custom matches!

This includes the following.

While the progression is slightly slower than playing online matchmade matches of Gears, we feel this is still rewarding for those who like to focus on their custom matches.

With Operation 7 Drop 1 we are introducing a Field of View option across all Xbox One devices, bringing console settings in line with PC.

With the field of view update coming in, the ability to plug a Mouse/Keyboard into your Xbox, plus the frame rate and input lag reduction on the new Xbox consoles we feel we are at a point where the parity between Xbox and PC is almost identical and confident enough in making this change going forward for Gears 5.

One of the most frequently asked questions we get in Gears 5 is about automatic card scrapping in PvE. We are happy to announce that in Operation 7 Drop 1 we will automatically convert your duplicated level 6 cards into Gear Coins!

If you have any acquired duplicated cards before this update, they will be converted into Gear Coins up to a total limit of 100,000 Gear Coins. Any future cards you acquire that are level 6 and duplicate will be scrapped for Gear Coins.

And that is not all, we have changed the ultimate of the Mechanic. Previously they would deploy a group of electric trackers which became more of a hinderance than a benefit.

We are replacing this with a new ultimate the Mounted Turret. When activated, the engineer will deploy a turret that any player can jump on and use against the enemy.

This change also means that we will be changing the skill card “Bloody Shrapnel” to “Shredder Rounds.” This skill card will now cause bleeding damage for any player using the Mechanic’s mounted turret.

Note: Your “Bloody Sharpnel” card progress will carry over to “Shredder Rounds.”

We are happy to share the following changes coming to the promotional classes in Operation 7 Drop 1.

This Operation drop also sees the release of three new maps for Horde – Atrium, Turbine and Command, these three maps will be playable via a special Horde Frenzy event to kick off Operation 7!

And finally, we are making additional tweaks across the PvE side of the game, check out the list below:

A new Operation means a new Tour of Duty! Before we dive into the reward for each category, we wanted to let you that we have changed a few daily challenges across Gears 5, see the list below.

We of course have the medal categories returning for another Tour with new challenges to take on, see the full list below!


Versus Basics - 3,000 Gear Coins on Completion


Versus Events – 3,000 Gear Coins on completion


All the stars earned from the dailies and medals will go towards earning the following rewards in the Tour:


Operation 7 drops May 18th, and we are looking forward to it! See you there - in the meantime, have a great week everyone, and watch our socials for more.

good stuff but where does this leave koth?

overall, this is great and exactly what the game needed. so many people are gonna come back.

I’m hyped to be honest

we are introducing a Field of View option

Amazing update. Glad that you guys are going out with a bang. Hope whatever plans you have with UE5 pan out really well, regardless of whatever is added to this game in the near future.

I love it. Good stuff TC

i would think so. this is just what the game needed.

This seems like quite a bit. I’m impressed. Another PVP reward for general though.

I presume these are maps created using map tiles (hence why they’re not playable in Versus)?

Also coming in Operation 7 Drop 1 will be the ability to gain multiplayer progression while playing through custom matches!

This includes the following.

Wow, this would also make the longevity of the game, after Op 8, even longer. Players can just host custom lobbies with friends and still gain rewards. First time this has happened in a gears game, I believe.

Also @Ultra_Gnasty my friend. Hollow Storm Sam. We finally have a good skin for Sam besides VDay.

Also also, this is the most good news we’ve ever received and somehow people are still negative. It’s like TC is in a lose-lose situation with most people. This op is looking to be second best as nothing can top OP5.

I cannot be more happy!good job, finally a change that was needed
now let’s get to people complaining about kbm

ack, Mechanic, thanks for the catch!

So Jack is playable in Escape then? Hell yeah!

Wow those promo classes tweaks. And very nice to get gold for those duplicates. Will be more tempted to play my maxed classes. Way better than my expectaitons. Good job.

Edit: Rereading the Sluggers changes. Imo it could become a top tier class. I wonder if the damage perk will stack with the already buffed 200% bonus to frag.

I am very pleasantly surprised.