New Ranking System, is it worse than before?

I’ve been confused with the ranking system before, but this newest iteration is getting to me.

If TC needs some pictures to see this, I’ll get some more to help out. But it just seems to be busted to me at the moment.

If your a good solo player. You finally rank up just to rank too high and get wrecked by 5 stack Master rank sweaty’s. It should be random matchmaking. Not by rank. Hard to have fun playing serious 5 stack every time I want to play a match!

Ranked is working great for me, now. Much more fair, although idk how it behaves in other regions of the world. US East, where I live, is probably the most active region in the world for this game, and is probably where ranked is the most accurate. I haven’t noticed any problems arise from the new Ranked changes, but yeah, some of the ones that have existed before the changes that they never addressed are still there. Like having to carry complete noobs.

Players should be judged on individual performance, rather then wins/losses.

I’ve done it with Solo and with a team of 5. We all have the same issue. We lost 3 matches and won 10 went from Diamond 3 to Diamond 1 one person did, I went from Diamond 2 to Onyx 3. Then I tried solo just see if it was different and the same thing happened. Where we win we get 0 to 26 points. We lost it’s 200+ points. The biggest games were just the last 2 matches to test. That’s when I went down even more after that loss.

@PooCooch
I am glad it is working for you. I am on the US West side. But I do not think that has anything to do with it honestly. I use to atleast get the 1000+ points back with a win and doing good. Now, I can’t get those points back at all. So I am stuck in Onyx 2 with no way of going up fully.

@TotalMadMike
I think there should be a balance. Because if you win you should get points, Before I was winning, doing great, and still losing points at times. Maybe that was just me, unsure though. It just is a loss should not make you go down a rank from Diamond 2 46% to Diamond 1 75%

@TotalMadMike
I think there should be a balance. Because if you win you should get points, Before I was winning, doing great, and still losing points at times. Maybe that was just me, unsure though. It just is a loss should not make you go down a rank from Diamond 2 46% to Diamond 1 75%

I agree with you on that.

Like: 70% individual performance (eliminations/ring caps/breaks) and 30% or so on wins/losses.

Everything went downhill once they changed it to focus more on match outcome, instead of performance. Since I was Onyx 2, and now I’m back and stuck again in Gold 3.

Got 105 eliminations last game, and only went up a lousy 4% percentage or so…

Yep, that’s exactly what is happening to me. It doesn’t make sense at all, and the math does not add up ever. Usually the rounds I do the best is 0. And the ones I do average or bad are the ones I get positive points on.

@TotalMadMike
It doesn’t really add up at all does it? You’d think. A win, no matter what, would raise you points and percentage by as much as you would lose from a loss. But it feels like a loss is -10x your points. And a win is +0.01x of your points.

What ever anyone thinks of the current set up, can we all agree that an 80/20 split in any direction is just stupid?

I agree 100% because now it feels like even if you do good. And you have that one guy that is 3 and 20 and you lose because of him just rushing in over and over. It doesn’t seem right now.

@RedHulk1973 Most likely, but at the same time it’s hard to get people who are all Onyx or Diamond players. And if you’re a Diamond, put on a team with 1 bronze, 3 golds. facing a team of silvers but that bronze makes you lose. Doesn’t feel right now, not to lose 2000 points in 1 game. 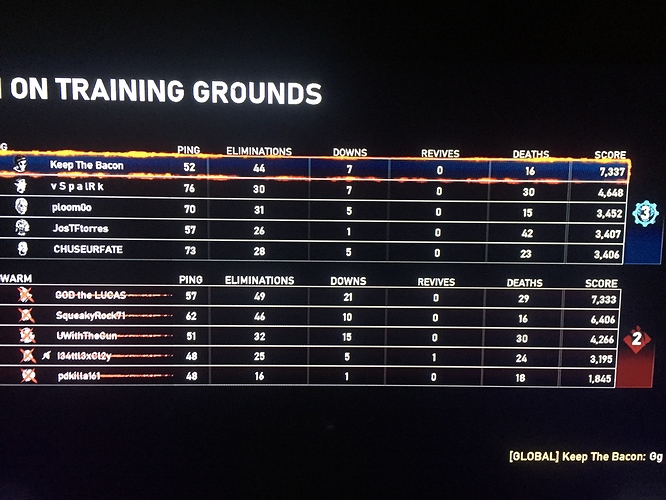 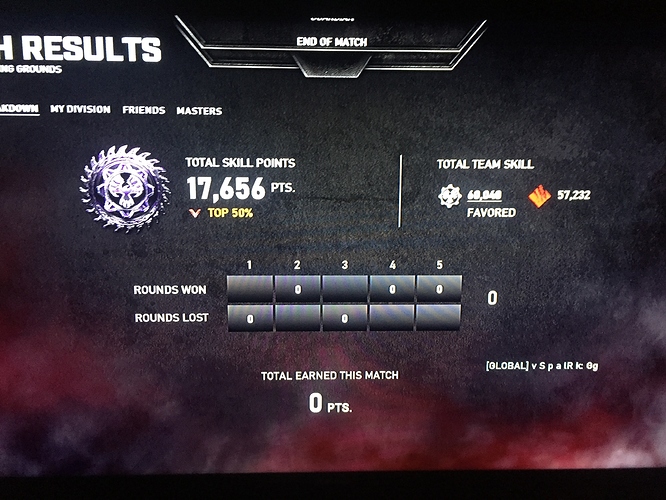 Imagine getting 7000+ points in Guardian, 44 kills, plus MVP … to then only get zero points. Lol

Absolutely correct. I don’t want to pay attention to rankings anymore because of how wonky it is. Just to frustrating and illogical.

Wow epic game right there! And that is why the ranking system is just not worth worrying about.

It should be random matchmaking

No, I think what you meant is it is random matchmaking.
As a diamond you are matched with bronze players every game. And as a 10ms player you can be matched with players way above 100ms.
I don’t understand how it can be more random than it is.

It should be a lot more strict actually :
Let’s say you are Diamond 1.
I think the game should match you only with Gold 2 to Diamond 3 (± 2 div gap).
This way you wouldn’t have to carry potatoes everytime and people would win or lose against people of the same level.

And when solo queuing, the game should only match you with solo players, maybe duos, and be less strict toward divisions (something like ± 4 to 5 div gap).

It should also put you only with similar pings (± 20ms) from the same region.

The problem is that is how it should have been on release.
Now that the versus population is very low, I don’t think the matchmaking can be that strict, unless most players accept to wait tens of minutes for a game.

As far as I’m concerned, I’d prefer spending 15 min to find a stable game where almost everybody plays on the same level (so you can at least have a pretence of teamwork) and where shots and movement are much more consistent, rather than wait 2 mins for that frustrating and boring nonsense.

But I doubt everybody would be ok with that.

It’s definitely not worse, but it still needs work.

It’s not random when the search is based on rank period. Now it might out reach because of balancing issues when a certain rank count is not available to fill room. That’s the point! You can’t debunk it Lol Its funny you tried.

It should be pulling from "Anyone available " who is searching for same game mode play. Rank should only represent true skill. Not be apart of match making.

Just my opinion anyway. Now I have to play MLG play with 4 randoms on my team with no mics. Against 5 Master rank sweeties who are communicating strategy just because I’m a good solo player I have to play those matches every time I play. Thats not random! Not fun either!

At this point I fully expect zero points in a 3-2 victory regardless of who is favoured, I’m sure you understand that struggle as a fellow Guardian player. But to be honest this one really hurt! It’s pretty rare to see someone get 5,000 score in a game, but 7000?!? Killed leader three times, survived twice, MVP… and nothing but goose eggs for my reward.

With the most recent update, yeah, I try not to worry about my tier anymore. Winning is now more important than individual performance and that’s pretty tough for someone who runs solo 95% of the time.

Exactly why I wont allow myself to be frustrated by ranking any longer, i am solo 100% of the time, and matches like that, from a ranking standpoint, makes the blood burn. Especially with the new update,…86%!

It’s not random when the search is based on rank period. Now it might out reach because of balancing issues when a certain rank count is not available to fill room. That’s the point! You can’t debunk it Lol Its funny you tried.

What’s funny is your use of the word “period” when you have zero argument.

What about you try to explain me this :

As a diamond you are matched with bronze players every game. And as a 10ms player you can be matched with players way above 100ms.

I have to play MLG play with 4 randoms on my team with no mics. Against 5 Master rank sweeties who are communicating strategy

It’s not random when the search is based on rank

For your information, the search is based on “Total Team Skill” points which is totally different.

Plus, there is no such thing as “true skill”, especially when solo queuing since you are supposed to carry potatoes against stacks.
True skill can exist when you are playing against and with players of the same level.
Only this way you can know if you performed or not.
That’s the reason why in every professional sport you got divisions and categories.

Let’s take soccer as an example to show you how dumb your statement is : In FA Cup when a Premiere League team beats a National League One, it’s hard to tell if just one of the team performed, both or neither.
In Fifa World Cup, when Argentine loses, it’s hard to tell if Messi performed or not as most of his team mates don’t play on the same level.

But if you look at a whole season, when teams confront themselves several times in the same division, you can tell if they performed or not, and the stats reflects the efficiency of the players in thier respective teams.

If you want to be an arrogant nitpicker you can tell i’ts not literraly random.
But as long as the system works the way it does, except for the 0,1% top players and the 10% really bad players, the sytem is not really accurate and it doesn’t reflect “true skill” at all.

I don’t get what I’m saying that you struggle to understand.
It’s basic logic though. “Period”.