I made this FanArt to show what I think the Black Steel would look like in the game menu or in gamepplay I hope you like it, what do you think about Black Steel in Gears 5? Do you want back designs of old Black steel characters from gears 4 to gears 5?
-I from Mexico 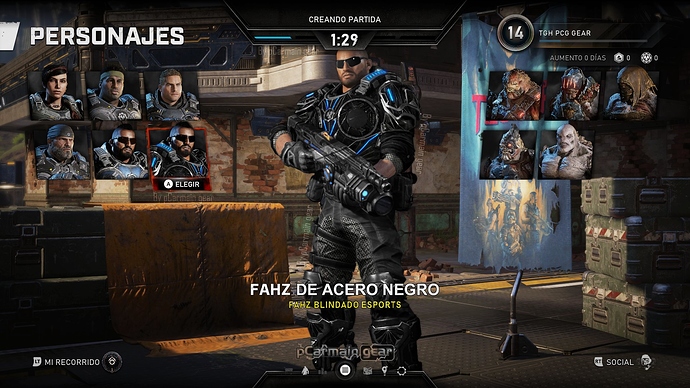 Looks good. Is there one for Kait?

So far I have only done this character of gears 5, I plan to do more these days on my page I have another 20 characters of gears 4 including the latest version of kait

I’m from Mexico, I use a translator

Yeah, I noticed this Black Steel Outsider Kait in one of your videos. That looks pretty good, but sadly not a real skin in-game.

The Black steel are already confirmed for Gears 5, the withe steel were the idea of a yotuber

Yeah I figured that. I know someone here had the idea of White Steel, not sure if it was a youtuber or not though

a youtuber mentioned it in a video, then a person made a sample of how it would be with a half-torso image of some characters
a black steel comes out in the game trailer, in fact I think it’s also fhaz

Really? I thought it was the other way round - that the eSports design this time around is White Steel. Someone had spotted a glimpse of a character in the Arcade Versus trailer to have what appeared to be White Steel armour.

Mind you, it was only a glimpse - this character was partly obscured by another so it wasn’t totally clear, but you could make out the same grooves and contours, just in white rather than black.

EDIT:
Here’s the thread from previously:

Whats up with the "White steel"? General Discussion

In the Tech test trailer, we see at the start what can only be described as white steel Oscar. It’s not as bumpy as black steel but it is certainly not normal. It almost looks like jewels . Other things I saw: New swarm pistol Onyx guard Hammer of dawn (most likely they new arcade mode) Blizzard map, akin to avalance but not avalanche. V day Hoffman.

Remember that fella who did his own Black Steel fan art? The majority of his ones were better than TC’s actual designs. Especially the later BS skins from eSports Supporter 9 onwards.

Oh man they were great. TC really hates the blue lights now for some reason. In my memory, JD, Del and Old Marcus were the only ones that had the right amount of blue. There were some good Locust too obvs.

Where was BS Characters confirmed??? I havent seen anything about those skins yet

Looks great but it’s funny to point out that TC dropped the chainmail aesthetic sometime after pack (6?) for literally no reason at all so you adding it was cool. I liked it and have no idea why they stopped doing it so out of the blue.

Yeah they reduced the number of affiliation lights which just turned alot of the later skins into black blobs. The skins in Supporter 1-5 had a good balance.

Also the choice of some characters was just bewildering. Aaron Griffin, Gary Carmine and the Deebee Shepherd? Or the half-finished Lambent Grenadier Elite? Ridiculous and half-hearted tosh!

This I can agree with.

It should be White steel this time

Especially in the MP trailer it did look like White Steel.