I don’t know about anyone else, but I am tired of how strong the Lancers are in core. When a full team decides to only use Lancers, it becomes way too easy for them to win. I get Lancers are a part of the game, but at least try to encourage people to use a gnasher. I’d much rather get outplayed than just lanced down from across the map. Bring back Gnashers only as a permanent playlist or at the very least give the lancers a serious nerf.

Eh, they are a bit powerful but depending on the mode I don’t run into many issues. Gears isn’t all about Gnashers and honestly a Gnasher is still easy to use in Lancer heavy matches if you know how to use cover and proper movements. But the truth is the Gnasher is also a bit powerful in Core so it kinda even out of you think about it rationally.

We need the return of Dominasher

Just because you only play with 1 gun in core doesn’t mean TC needs to cater the game to you. If anything, nerf core gnasher a bit. I say that as someone who plays KOTH with gnasher only, but doesn’t want to force everyone else to play the way I do.

I do agree lancers can be a bit strong but I disagree they should be nerfed.

This is my very first gears game. I’ve never had a console. I’ve never really used a controller much. Just pointing this out so you know I came to versus as a total newb about a year ago. I would say I’m a solid Onyx 2/3 player now.

For the first 3 - 4 months I did not use the gnasher at all because I didn’t know how to. Anytime I tried to use it I would just die. I didn’t understand core or comp tuning, I didn’t know there were execution rules (I was very frustrated in escalation for a while wondering why my gun wasn’t killing a guy downed at point blank, lol)

So I discovered the way I could counter gnashers up close was with chainsaws. I used lancer exclusively. I would down/kill people from afar and if they got too close it was chainsaw time.

If the lancer would have been nerfed and sucky… chances are I would have thought the game wasn’t worth my time to learn the curve of. Everyone told me once I figured the gnasher out I would switch over and eventually I did.

Here’s my current stats, the gnasher used to be less than 5 percent probably 6 months ago. You can see I’m sitting on 4800 saw kills as well.

And now my gnasher stats have caught up as I started to get along in the learning curve.

So, that’s why I have to disagree. I think a game like gears where you have so much that goes into your success … from strategy, movement, map knowledge, enemy locations, etc, etc, the last thing you want to do is make the weapons impossible to start with as well. Then the game will have too steep a learning curve and anyone new will say screw it.

My very first escalation game ever pushing like 40 chainsaw kills and I had so much fun that I wanted to play more and more. 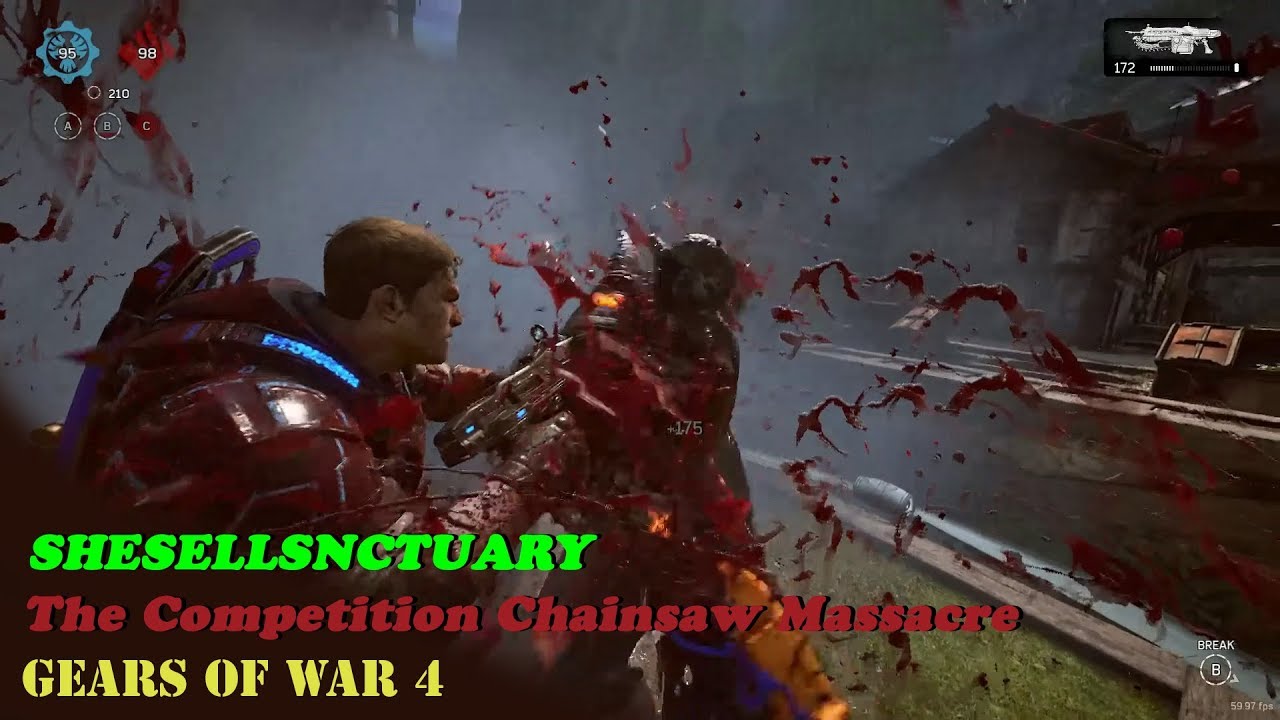 Thanks for the video. Love that song and loved the way the song really kicked off the second you got your first lancer kill. I usually get screamed at for killing someone with a lancer saw so you must have some serious fun lol

As for the OP. Its a no from me on nerfing the lancers. I have been lancered so many times I lost count but it was from lack of cover use and just straight up poor decisions on my part. If anything the lancer helped me to improve my movement on the map. In a game where I have a choice of weapons I am going to choose which is handy for the current moment so one minute it could be the gnasher and the next it could be the lancer and I don’t want to be forced or “encouraged” to use a gnasher.

Yeah Just give everyone Snubs to start with. Rifles on the battlefield? OP!

And that’s a very fair point. I do agree core Gnashers should be nerfed, the distance damage is way too high and I don’t expect The Coalition to cater to one specific player, However that’s why I bring up the option of bringing back Gnashers Only as an addition to cater to the multiple different players who are just tired of being lanced down

Yeah but keep the gnasher the same… lol. Buddy everything about core needs nerfed

I’m amazed you were able to get away with that many chainsaws. Almost as if you were playing in a comp game full of bronzes and silvers lol… I almost forgot you were playing Gears 4 because you’d never see more than one (and probably an accidental one at that) chainsaw kill in a core/comp match consisting of gold or higher ranked players. Kudos to you, I guess!

Lmfao, that’s classic. Those players were terrible at adapting and had absolutely no awareness but it made for one hell of a unique montage.

I’d love to see gnashers only as a permanent playlist. Some of us just dig the movement in Gears and don’t want or need the sweat that a lot of players bring. I’m talking about the guys that lancer in KOTH and just ruin the fun of that mode. I wouldn’t even mind if KOTH was just a gnasher/snub/smoke mode and those who want to lancer can play Escalation where rifles don’t ruin the flow.

Mine seems slow compared to watching this, and some others

“Yes, other weapons are fine, but only as long as they don’t interfere with my ability to run across a large open area in a straight line towards you, until I can gib you point blank with my gnasher!”

Adjust your play style to the map and opponents you have on hand. Stop whining about others being able to nullify your one only way of playing

I dont care what anyone says so remember this is my opinion. Gears of war was made on the Gnasher being the dominant gun and always should be.

Using a lancer isnt hard and ill stop everyone right now from saying “but my positioning and map knowlege is off the charts so i deserve to melt people down”
The act of lancering alone is very easy, insane firerate, ammo cappacity, range, stopping power, damage, short reload and no sort of recoil, its essentially a laser.

Thats like saying becasue i can wall bounce my shotgun should be the most powerful, the reason the Gnasher is so powerful is because its fun and skillful at the same time. You need to really understand the range of the gnasher to do well with it, wallbouncing compliments it. A lancer you just spray and aim like every other gun, its abusable by stacks of teams.

Gnasher cannot be abused by teams as they still need to risk there life to get the kill.
A lancer is abuseable as it can do so much and do it from a safe distance, combine having teammates join in and you can literally spawntrap a team. It also leads to teams camping cough cough Blooddrive.

In conclusion Core is broken and should never be seen again, im fine with lessing the shotguns range but i sure as hell want that lancer nerfed, at least in Gears 5.

I know man me too. I don’t seem to move that easy or wall bounce that often

Can you guys link the minute where you think fast wall bouncing is?

When a full team decides to only use Lancers, it becomes way too easy for them to win

Sounds like you need to change your method of approach. If the entire team has a Lancer setup going it probably isn’t best to use your Gnasher until you can close that gap or disrupt their lines of sight.

However I wouldn’t mind a Gnashers only playlist, either.

Check that out. That’s what I’m talking about wall bouncing stupid fast. Idk how you do that. I’ve had players do that while I’m playing against them but I can’t do it.