To give a quick rundown about this thread I’m just keeping all my questions here to be more compact.
I’ll probably keep the newest questions on top and old ones on bottom

I need to find out what’s the best hybrid build for Robotic Experts/Baird. What I mean is I need a build that can support AND do dmg in sticky situations.

I’ve been playing Mechanic a bit recently and really hate how overpowered the base gets when the group lacks DPS. I’m not really a sentry builder so this happens far more than I’d like…Perhaps there is nothing wrong with a Shock Sentry + Regular Sentry in all openings but I’d like to avoid this if I can. 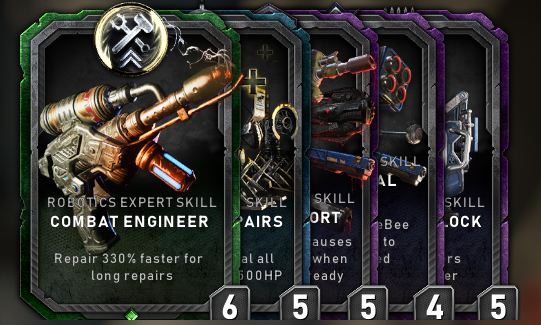 I personally like to keep combat engineer if my group is a hit or miss and continually let the taps get chomped on. I’ve highly been considering dropping this card for Bloody DR1 though with all the mess I’ve been dragged through playing Robotic Expert.

I’m probably not fully optimizing the DB wep dmg but it feels like the only useful wep with my current build is Embar since it gains the dmg bonus from experimental weapons, heals if it kills and bleeds enemies.

I’d like to know what everyone else uses and if they even bother with sentry. I really don’t care how I build, I just want a backup plan if the DPS is low and things are overrunning us which subsequently only happens when I play support

So I have a quick question about this Tact card…uhhh it doesn’t work.

Description says anyone who kills my Marked targets but it literally doesn’t apply
am I doing something wrong or is this card bugged?

3/20/2021 Saturday - Question about Lancer GL
Just picked up Tactician’s and I’m going with the Lancer GL method but I didn’t realize how much I disliked the Lancer GLs accuracy. This might completely be me but I’m having a hard time finding the optimal way to use Lancer GL. Every Gears weapon is trial and error in my opinion and you learn from using it more. A good example of this is probably the boom. After using it so long you know its mostly splash dmg and not direct hit in most cases

With the Lancer GL I can’t tell if I should be directly aiming at the target or splash dmg. Sometimes I’ll aim this thing RIGHT on a Swarmak and it’ll completely fly over it. I seriously don’t get this weapon. Another time I aimed it at a walking wardan and it whiffed. My poor performance with the GL is likely due to not using it enough but it still begs the question is this weapon concentered explosive or splash explosive?

Aim in front of the enemies, pre-aim basically.

Damage is AOE. Play Keegan with Duration, Speedloader and the perk at 10 and spam away to get a feeling for it.

I way just about to ask about speed loader! I Was also wondering if the Lancer GL gains a dmg bonus from its artillery strike during an active like the boomshot/JD? Far as Speed Loader I heard this card at Lv6 completely avoids active reloads? I don’t know if thats true but if it is that sounds like Boom could be really good too then.

It does. The AR-perk also increase the damage. That’s why you should use the GL if possible during the Ult and the Boomshot to get your Ult back.

If it’s a moving target, then you’ll need to lead the rockets as there’s a very clear 2-3 second gap between you firing the rockets, to them actually landing. With a Swarmak, they’re relatively slow moving and they’re massive so you can tag the laser directly onto it and it will still hit it, albeit possibly not all of the cluster rockets. The damage is AOE as far as I know, although the mini-rockets land quite close together.

If it’s a faster moving target like flying enemies - Sentinels and Guardians, you’re advised to wait for it to stop moving. Their movement can be unpredictable. Especially if team mates are also shooting it, when they take damage they will fly away to avoid gunfire. In such instances, in an ideal world, your team mates would (and should) allow you or any other high-damage dealer to take the first shot (FYI, the same applies to the Marksman using their X-Ray - ideally your teammates are not shooting it as it makes it harder for the Marksman to land the headshot).

In Horde you should familiarise yourself with your base and sightlines - use objects to ping the lasersight off - walls, low cover, pillars, even fortifications placed by the engineer etc. Also, if you have a half-decent engineer, they will use barriers to create chokepoints and to slow the enemy down enabling easier hits for you.

I’m just starting leveling up the demolition class, and I got to say using the GL with both cards makes it a lot of fun. I primarily use bullets and only use the launcher when there is a cluster of baddies or on a boss. Thing shoots lazers. Perk critical damage and it melts with headshots. I believe crit also applies to the launcher?

Funny thing is I don’t even have any issues using it on demolitions really lol. I only noticed issues when i had to use GL on trash mobs or when I had enough ammo to spam it. Suddenly things became more difficult to hit or more like I wasn’t used to using GL on those type of enemies.

It’s extremely fun to use on Demos though, mostly because I’m shredding bosses with it (no pun intended)

I was using Hammer burst with tatician. Packs a punch with perks and cards.

Both my classes are around level 14, nowhere near full levleled, but I’m enjoying both their ballistic capabilities and tending to lean on the explosive weapons for dire situations.

Bumping for another tactician question

It applies to whoever kills the target. You don’t get free ult charge by marking the enemy someone else kills. Gotta kill it yourself for Recharge Bounty to work for you.

wait so anyone who kills my marked targets get cooldown on their ultimates? That’s actually so sweet, Not entirely busted like I thought but its busted in a different way.

wait so anyone who kills my marked targets get cooldown on their ultimates?

Yes, but it also works for yourself.

Mark an enemy and teammate kills it = teammate gets ult cooldown

Prioritizing who gets the kill on the marked enemy was a lot more relevant back in the day when Escape used to be much more difficult to complete, now it doesn’t matter so much.

Prioritizing who gets the kill on the marked enemy was a lot more relevant back in the day when Escape used to be much more difficult to complete, now it doesn’t matter so much.

This used to be super helpful early in a hive to get ults up quickly, making sure very specific players got the kills.

I completely agree, now its not as important.

I feel like the descriptions to some of these cards are so blunt it actually leaves out information, It definitely makes sense though now lol, thanks.

If it said “if” or “when”, then it would be giving you +25 seconds cooldown. But it said “for”, meaning it’s cooldown for someone else. Just one word makes a whole difference to meaning, I knew how it worked, but I couldn’t understand why it was confusing. But now I get it.

Bumping because I’m a bad baird

I personally would keep the Bloody DR-1 skill instead of Combat Engineer. It may take longer to fix taps if they get damaged but I found the bot to be useful if it behaved itself with the added bleed(and if it didn’t get nuked straight to oblivion right away). Especially against a Carrier it could do a ton of damage. And since you shouldn’t need repair speed for everything else due to precision repairs…

Worth noting, I would only use the bot on boss waves and/or when needed, not as a freebie to throw out all the time.

Do you ever find yourself using anything outside of the Embar far as DPS? I’m trying to think of ways to make myself more assertive for when DR1 or Scions breach the base. Maybe carrying a Markza and just tapping everything I see to bleed them is a decent start.

I’m aware everyone has their own building style aswell but…It feels a bit more difficult with Baird since you literally have double the price of fortifications to Del on a good build. I May just stick to barriers and decoys outside of Lockers obviously

Getting rid of Combat Engineer is going to be tough…but I think I can do without it once I’ve gotten used to it!

I sometimes used the Markza for Drones, but it’s not the best weapon with the relatively low bleed. A Longshot works ok too, but due to it firing slower with much more headshot damage I couldn’t tell if it got that much of a benefit from the bleed. But it works ok with EMBAR and Markza, though mostly I would use the latter if I just felt like putting a load of bleed stacks on something.

I have yet to play the class much since I got it to level 20 as I barely touched the engineer’s role in Gears 5 bc it relies too much on teammates not sucking terribly. Even with a combat-support hybrid like Robotics. Tended to be fine building shock sentries alongside lockers and a barrier field though bc I usually wouldn’t spend anything on repairs unless a Matriarch or Swarmak waltzed through my stuff.

And in my experience Combat Engineer is not a necessity but merely a convenience. Unless you get a tap(or multiple) in some really awful spot(s) and/or your team is incapable of defending them.