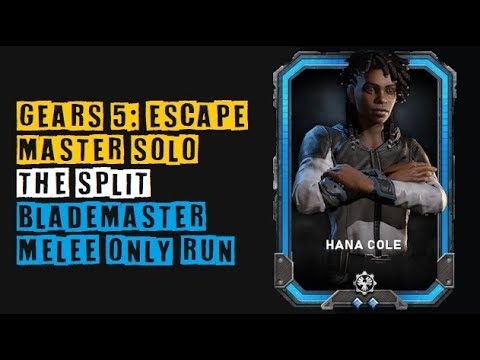 Probably the toughest melee-only solo I have done, and certainly the one I’m most proud of!

Act 1 was a breeze; as for Act 2 - I chose the right path, and the deciding factor there was luring the first set of Sentinels away from their spawn and getting rid of them early. The reject spawn then allowed me to build up the ultimate and have it ready for the final fight.

The game started lagging pretty damn bad right at the very end, probably due to the sheer number of enemies still alive. And I had the pleasure of fighting a teleporting reject on the LZ!

Finally, someone else was able to do this. And you did it melee only. Had a feeling it would be you lol

Im at work right now but ill be sure to watch this later.

Was thinking about trying striker on the split because it will be relatively the same except for the sentinels in act 2. The embar one shotting stuff will be massive.

Wow, this is impressive. Melee only (I suppose I’ll give the bleed and Flashbangs a pass lol), but on the SPLIT!? Great job!

The best part was hearing the ‘WARNING!’ as the LZ doors closing while you were still way down in the supply cache! Made for a thrilling Indiana Jones exit haha.

Thanks for checking it out!

It just had to be done to once again showcase the power of Blademaster (not that anyone doubted it)!

Striker is definitely a hidden gem of a class, although I’m nowhere near ready for running any serious solos with it, as mine’s only a level 12 I think!

not that anyone doubted it)!

Yeah, I use TC’s definition of melee-only, basically everything that would still qualify for the ‘Brought a knife to a gun fight’ achievement - this certainly does

Was thinking about trying striker on the split because it will be relatively the same except for the sentinels in act 2. The embar one shotting stuff will be massive.

I so look forward to seeing this in action. I gave the class a brief try on Surge and MAN the complete lack of ballistic damage resist sucks lol.

I use TC’s definition of melee-only, basically everything that would still qualify for the ‘Brought a knife to a gun fight’ achievement - this certainly does

Ah, that explains it, ok. I can’t tell you how much I was expecting you to pick up an Embar though! Just from habit lol.

Impressive work Moss, going that right path in the second half seemed key. I have been trying to solo this hive with Blademaster for a while but the left route always proves my downfall with the random salvo missile from crazy angles. I’ll have to give you strategy a go when I get off work today, thanks for the awesome video!

Thanks for checking it out, and appreciate the kind words!

It’s been on my list for a while too and I’m so happy it worked out!

The left path could work too, but I didn’t like the Sentinel location on my run (only one was visible and willing to come towards me) and then you are exposed to two sets of Elites and Deadeyes, right after the bridge and then again once you jump down the ramp which ruins any chance of a more stealthy approach.