KoTH is on stake of unplayable 10 matches = 15+ Leavers

KoTH is on stake of unplayable 10 matches = 15+ Leavers. I know Gears 5 will be released on less than 45 days. People is practicing to GEARS 5 atm and with the stake of your game-modes is imposible at this point i will just to go practice vs BOTS to have a better experiencie…

i Suggested many times KoTH should last only a single round of 220 Capture points because the people do not have the TOLERANCE to stay 30 minutes on a single match.

Also people exploit your “LOL” LEAVERPENALTY on this way

The console hardware or the PC hardware should have the leaver penalty of 30 minutes to avoid people just swap profile and bypass your penalties.

This is a sign that you need to pair up with like minded individuals and stop counting on randoms to stay in a match.

Also, no, 2 rounds is perfect. If you are worried about quitters and want a single round go play Social.

By the way, I highly doubt they’re using multiple profiles. If you’d check the profiles for the majority of quitters they likely went to Fortnite to bypass the penalty.

I just got done 2 full games of KOTH with no quitters and people who knew what they were doing, so far I have not encountered a drop in players nor any people who quit tonight.

Ran into a few quitting cowards 2 days ago in a KOTH.

On my nearly 3 years exper playing gears. KoTH is the mode with more leavers and the problem is because the duration of the matches.

The “Average” duration of guardian, TDM or dodgeball matches are 8 to 10 minutes. The average duration of KoTH is 20 minutes because you need play two rounds mandatory.

Also i just pointed how you can EXPLOIT the LEAVER-PENALTY cuz most of the people have 5 + profiles on their consoles.

In conclusion you need understand the average FORNITE user will never tollerate a 30 minutes KoTH game dont be silly. Also if you are so SURE there is not leavers on KoTH i challenge you do 10 KoTH matches and stream that we will count the amount of leavers every match…

I’ve checked their profiles after they quit. The majority of the time it says they’re playing Fortnite. I didn’t just make that idea up you know.

I know Gears 5 will be released on less than 45 days.

One round KOTH already exist in Social Quickplay and no leaver penalty.

I agree that KOTH should be one round. I had the same opinion in Gears 3. I’d rather one round up to 270 instead of potentially three rounds of up to 180.

Maps normally have rotating pickup weapons every round. But with one round… well whatever.

The best way to play KoTH is on warming-competitive that even add bots and is amazing the problem with this mode there is not rank and most of the time you end playing with Diamond or Onyx 3 players.

KoTH on quickplay social is not a option cuz i will not be leaving 3 - 5 matches until finally i got in one. So is more easy just make KoTH single round this last 33 days so we can practice and people leave less.

I understand you made this thread to vent your frustration. But this can’t really be solved and not under anyone’s control except quitters. Although I’m expecting the situation to become better when Gears 5 releases. With more population.

One Round isn’t good because then there’s no chance of a comeback.

If it’s going 3 rounds then it’s quite competitive.

I’ve never had an issue with length of matches.

People that quit either can’t handle losing or just don’t care and will quit out.

Some may crash and then not bother coming back.

Likewise someone may disconnect and then not come back.

Some people might get rifled and think that’s it, I’m out.

Yea I never thought people were quitting because the matches are too long. Its either they’re sore losers and cant handle it or they crash. If it was because of time they wouldnt quit out to go play fortnite

It’s almost exclusively the ones on the losing team that quit out.

I stopped reading when you were saying that KOTH should only be one round.

Like others already postes, go play social if you are mad by quitters and the two rounds

Its actually true, that people do quit because the matches are too long. That’s why there are also so many quitters in Horde too.

When it goes into a third round, it doesn’t always mean its a competitive match. A party of five will intentionally lose the first round and just farm kills and then cap the ring in the following two (if they know they can do this that is).

Get out of here with your 1 round bs. People quitting is never gonna stop. Get used to it

Even if they went to one round people will still quit if they get too far behind. Quitters gunna quit regardless.

Ohhh, the fun which was had… 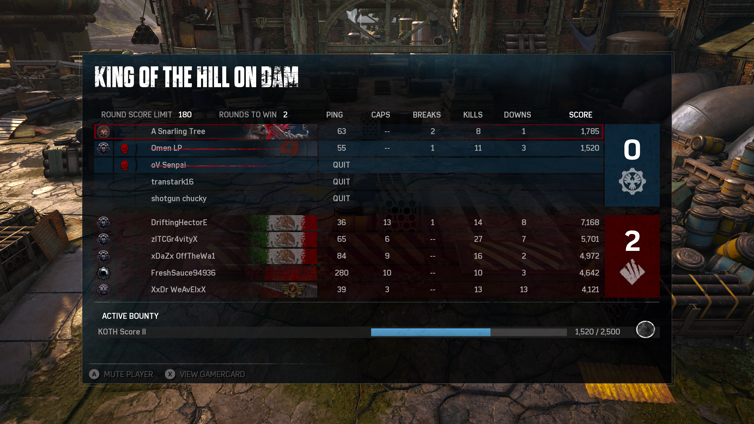