Is it a rule not to add new guns to versus? Add that HoD already

Why dont we have the Hammer Of Dawn on versus ? Its already in the game, so it should not be so difficulty putting it into versus. I relly understand new guns are kinda of a struggle to get working, but you already have it!! It is a really nice gun to use, different from any other, would make versus feel a bit fresh etc

If i’m talking crap, please explain me why, dont be an assh**e and come insulting me, Thank you. 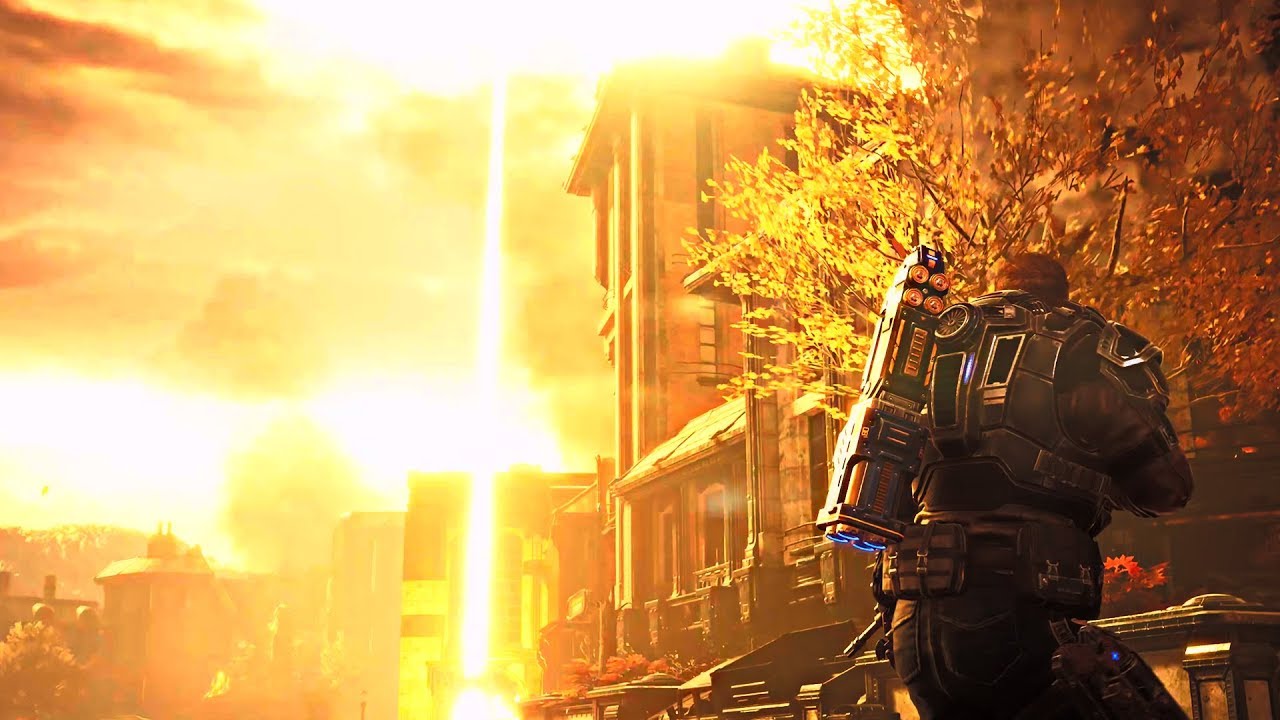 Personally think they are saving it for Gears 6.

The Hammer is pretty busted in story mode, lol.

Automated maintenance units would fix that problem, the tech for it already exists in DB units that can act autonomously or with a central network connection. At least if it was to function without targeting beacons which only the UIR satellites appear to require(and Baird’s had time to look one of these beacons over so he could potentially create more… or a blueprint still exists somewhere in old COG/UIR archives).

Re why the Hammer isn’t in Versus… I reckon TC didn’t put it in because “balance”. The Breaker Mace already got a ton of flak for being “OP”. Can you imagine how bad it would be for the Hammer?

Would love to see the Hammer of Dawn back in multiplayer; such a cool weapon and concept in the series.

I hghly doubt this is the reason, TC most likely don’t want it in Multiplayer, TC seem to have something against much of what Epic left behind for the most part.

I miss it soo much

I fully expected them to add weapons with OPs. It’d add a little bit more and give a little more hype, shake up the VS/PvE meta you know?

HOD and Booshka are good Grenadier/high-DMG weapons that’d provide two unique styles of play in VS and other modes.

Also not buying the “Marketing Error” for the Booshka appearing back in the OP3 trailer. I understand the Lancer MK2 in the Carmine one as the MK2 appears throughout the story mode of Gears 5, but the Booshka never does. It had to be animated, modeled and designed with sound and all first.

So either it’s planning to be added in, but they weren’t ready and tried to pull a PR 180. Or they wanted to have it in pre-launch and cut it earlier on.

Unless there’s now a more concrete answer for this let me know. But the “Marketing” team alone did not model, design, code and create the Booshka to appear in a trailer. That’s no accident.

I meant busted as in stupid powerful. Broken. No charge time. No boop boop.

My opinion (and I assume TC’s reasoning behind the decision to exclude HOD from the multiplayer) is that weapons shouldn’t be included in versus only for the sake of variation.

I don’t think there’s an actual need to have it in the weapon pool. Dropshot already fills that role of a weapon that can ignore cover and force players to move out of cover (HOD was mostly used either by firing from higher ground or aiming past cover from the side to hit enemies behind cover). Dropshot, unlike Digger in Gears 3, has a wide instakill radius too. So it’s kind of like Digger and HOD combined.

Dropshot is also far better balanced than HOD. HOD was always either overpowered or underpowered in versus. In the long run, putting weapon balance before anything else when deciding what weapons are available in versus and how they function is going to be healthier for the game. And Dropshot serves the same purpose as HOD, but better.

If TC can find a way to redesign HOD so that it’ll have a unique role in versus while also making sure it’s in balance with the rest of the weapons, then I’d be all for returning it to versus in Gears 6.

EDIT: Also, adding weapons into the game after its release is not as simple as one may think. The maps need to be designed to play with the new weapon AND it would have to be made sure the newly added weapon would be in balance with the rest of the weapons. It would require testing and tweaking of (potentially ) several weapons, which could take anything from weeks to months. And also most likely more tweaks to weapon balance after the weapon’s introduction.

The argument you just used does not hold water for PvE, shocking that they haven’t tried putting it into PvE already.

@Buster_McTunder Gears 5 is really awesome right now because it still has tons of potential, whether it be adding enemies (classic locust pwease

) or weapons (scorcher is what I desire above all, but any weapons would suffice) but I’m curious if TC has any more “ambitious” plans for it, I wouldn’t be surprised if all we get from now on is balancing stuff (for PvE and PvP) and maps and characters, I definitely think they’ll add some more classes going forward but who knows? Although Gears 5 is still a glitchfest and has performance issues the overall amount of content is great in my opinion so they may just decide to move on and focus on making Gears 6 that much better you know?

Well, the OP was about adding more weapons specifically to versus so I responded to that

Anyways I don’t see balancing being too difficult for the most part, HoD is a really tricky weapon so it is difficult to balance around, but I doubt the balancing is too much for TC to handle, They can also just allow it as an option in customs, then introduce it faithfully in time, so people can test it for a while (developer playlist is an option too) so I doubt balancing is the issue. I just think TC (as a company) does not like the legacy Epic left behind, its why they haven’t brought back OG locust into PvE (even in Gears 4 where most of them were finished and ready) and its why they haven’t brought back any weapons in Gears 5.

I doubt it’s about that, honestly. They have brought back OG characters, they just focused on new customization items first (which I’d do too if I was a developer, because people generally want new content first with new games). And they have kept most of the OG weapons in the game too.

I believe the HOD is excluded from versus because, as it is, there’s no purpose for it that no other weapon doesn’t fulfill (as I described earlier). And that Dropshot better fulfills that same purpose HOD had in previous Gears titles.

Explain to me the purpose of the Mulcher vs Trishot then, Overkill vs Gnasher, Markza vs Lancer, Longshot vs Embar… TC seems to have little issue with redundancy considering most weapons they add were already done before.

Gnasher is obviously a starting weapon as opposed to Overkill and the main duel/slaying weapon. Also, there’s a lot more meta gameplay involved in it than most, if not all, weapons with the unique movement, holding shots etc that are strongly tied to it.
Overkill is a way more powerful short range weapon that allows, for example, one player to easily hold off several enemies that come close by theirself in some key locations without the need of having several players there (which allows the team to put more resources to other locations)

Markza is a support, mid-long range precision rifle that can pop heads and it requires a different type of recoil control than other weapons. Lancer is an effective mid range support weapon that is mainly used for “crossing” enemies.

Longshot is a sniper rifle and has the longest range out of all weapons. Embar is a railgun.

Reminds me of a certain company that spent billions of dollars on a franchise and the woman now in charge wants to sink it.

That MK2 lancer and Marcus’s wooden stock lancer could easily be weapon skins for the default MK3 lancer, they did a similiar thing in Gears 4, I’d be happy if they brought them in through a skin all the same… 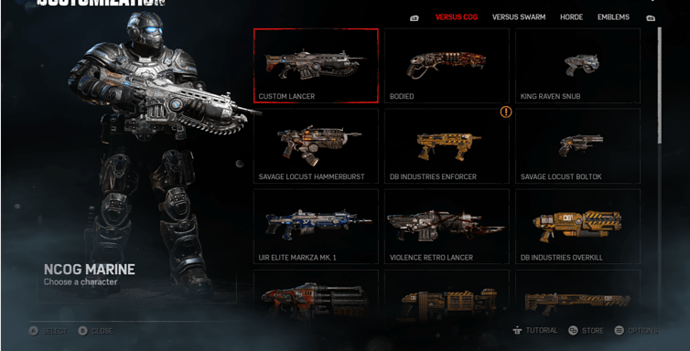 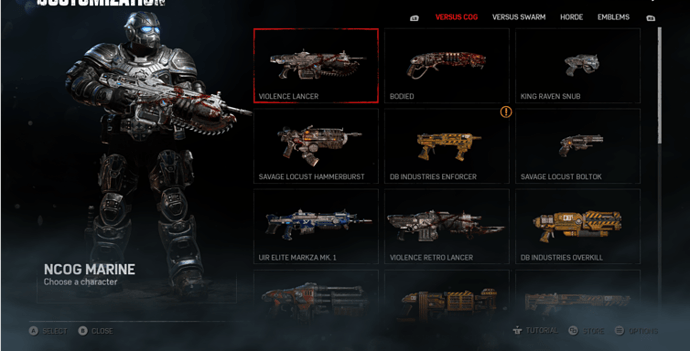 @Clutch_HanZ Right? Something about the mortar added the ‘War’ in Gears of war, the incoming rounds screaming through the sky the AOE lighting up where it hit, so cool.

Explain to me the purpose of the Mulcher vs Trishot then, Overkill vs Gnasher, Markza vs Lancer, Longshot vs Embar… TC seems to have little issue with redundancy considering most weapons they add were already done before.

I think this sums up the point of different weapon placements on different maps and why the placements each round change in versus for example, @S_T_Y_R_A_N_K_l not to say it isn’t down to what you said about the meta and different weapons have different playstyles to use… but by that logic the weapons with the same kind of use just wouldn’t be used on the same map and I’m pretty sure its possible to have some maps with weapons not included in that map placement even now…

I dunno I think it could work, I think it really boils down to where the weapon is and how strong the map position is

Technically the Markza has been around since Judgement so TC didn’t invent that one.

And as much as I’d like to see a Classic Locust variant for Horde, even just a slimmed down version with the character models already in the game, TC has emphatically stated that it’s not going to happen. At least not in Gears 5. I mean, the community can keep pestering TC on this point and maybe they’ll consider it for Gears 6, but with TC’s track record I wouldn’t hold my breath.